Share All sharing options for: Preview: Michigan State vs. Northwestern

[Sorry for the delayed posting. --LVS.]

Hey! Let's celebrate a big comeback which ended up meaning absolutely nothing in one of the worst MSU football seasons ever!

After a tremendously disappointing start to the season, in the last two weeks your Spartans have effectively turned things around, and at least left open the possibility for this to become a successful season. What the 3-game losing streak does mean, though, is that there is no more margin for error, and a game like Saturday's -- at home, against a less-talented team -- has gone from "should win" to "must win," lest our rehabilitated 3-3 record become 3-5 by next Saturday night. Northwestern has had quite a bit of success recently in East Lansing; they've won the last two, including a game in 2007 which stands as our poorest performance under Mark Dantonio. Our upperclassmen will remember that game too clearly to be looking ahead to Iowa. The line on this game, I believe, currently has MSU giving 12.5 points; I think that's awfully generous, but for our purposes, fortunately, beating Northwestern is more important than beating the spread. While we may not do the latter, we will do the former.

Normally, it'd be difficult to say that a 4-2 record for Northwestern is disappointing, but LTP certainly is, and with some justification:

On the heels of our 9-3 2008 season buoyed by a stellar D, all signs pointed to the best D since 1995 and it has been an adventure to say the least. Our O-line was expected to be the strength of the offense with question marks at the skill positions. Mike Kafka has been a pleasant surprise with his passing and our WR corps is stellar, yet we lack a true Dell or Cunningham-like gamebreaker. Our line play has been weak and our rushing game non-existent. Essentially everything we thought would be great is not and almost vice versa. 5-1 was what we expected as a realistic worst case scenario as fans through those soft 6 games. It has been disappointing to say the least.

Still, 4-2 after 6 games certainly puts Northwestern in a position to play in a good bowl if they're able to pick up a key win or two from here forward. Presumably, Saturday would be one of the games they've circled on their calendar; despite the rough start, this is not a team that has reason to throw in the towel. 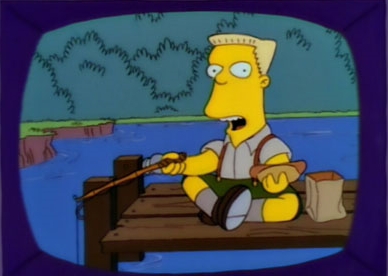 WHEN MICHIGAN STATE IS ON DEFENSE: . . . hold onto your hat; Northwestern is going to want to play fast. The Wildcats ran 93 offensive plays against MSU last season, and will frequently forego huddling up between snaps. In that regard, it's fortunate that we've already played Michigan: while the offenses aren't exactly the same (Northwestern's much more of a passing team than Michigan is), the Wolverines' frequent no-huddle drives should have prepared us for the pace NU would like to play at.

Northwestern's run game has been a disappointment. Take it away, LTP:

We've stunk. The original starter Stephen Simmons has been out most of the season with an injury and true frosh Arby Fields early-on appeared to be the guy who would get the ball and become our next 4-year RB. However, our line has been horrid and our RBs have yet to show they can elude defenders. Jacob Schmidt, a short yardage back and walk-on turned schollie this year is a feisty guy, but good for 3rd and 2 and not much more. He's got great hands and turned heads with an amazing catch last week though. I can't remember our run game being so much of a detriment.

Sippin' on Purple reports that Simmons is listed first on the NU depth chart for Saturday, so they "might actually see some semblance of a running game this week." Simmons certainly seems to be an improvement over the other options:

Limited sample size, of course, but compared to the other two, Simmons has picked up an extra yard per carry. Furthermore, QB Mike Kafka is a threat with his feet; he has 229 positive rushing yards through 6 games, and exploded into the Big Ten consciousness with a 217 yard (!) rushing effort at Minnesota last year. He's obviously reined in the rushing a bit so far this year, but given MSU's historic difficulties with rushing quarterbacks, I wouldn't be shocked to see some designed keeper plays.

Kafka's been more average passing the ball: he's currently 8th in the conference in passing efficiency (130.04, well behind Kirk Cousins' 141.81, and against lesser competition, of course), and is completing 67% of his passes, with 5 touchdowns against 4 interceptions. LTP says that Kafka "has a great arm, yet we never stretch the field and really go deep"; in my mind, that reinforces the perception that Northwestern is a team which lives and dies on the short passing game. We had tons of trouble with that type of attack against CMU, but we seemed to learn from those mistakes against Michigan.

Not surprisingly, NU's wideouts don't seem to be the deep-threat type: the top receiver is Zeke Markshausen (but can he catch frisbees in his mouth?), who has 34 catches, but for only 348 yards (10.2 average) and no touchdowns. He's not big (5'11", 185), nor fast, and he is white and a walk-on, so I believe he fully qualifies to be called "gritty" and "Welker/Chrebet-like." Drake Dunsmore (sounds like he should be sailing off of Cape Cod, no?) is the second leading receiver, and has remarkably similar numbers: 25 catches for 270 yards (10.8 average) and one touchdown. He's bigger, though: 6'3", 235. LTP also says to keep your eyes on . . .

I think Sidney Stewart might be our biggest threat (had 7 rec last year vs Sparty mostly when game was out of hand). However, I'm a big fan of Jeravin Matthews a tweener WR/RB whoseemingly makes big things happen on every touch ,yet we don't use him NEARLY enough.

For our defense, expect to see us play a slew of different linebackers, in an attempt to keep fresh through Northwestern's breakneck pace. Chris Norman figures heavily in the plans:

Because the Spartans are expecting more of the same, players such as true freshman outside linebacker Chris Norman better plan to have an expanded role. [ . . . ]

"The other reason is we’re going to have to play multiple people. One of Northwestern’s goals is to wear you down. But when we have athletes like Chris, who can give guys like (starter Brandon) Denson a break, we’re going to use that."

Norman already has one start, against Notre Dame, to his credit, but only six tackles. Junior Jon Misch, who backs up Eric Gordon on the other side, also figures into Tressel’s plans.

Also worth noting: NU has allowed 14 sacks through 6 games against poor competition. Their offensive line is not good. We have 10 in the past two games. We could easily make that 15 or 16 through three games by tomorrow night. 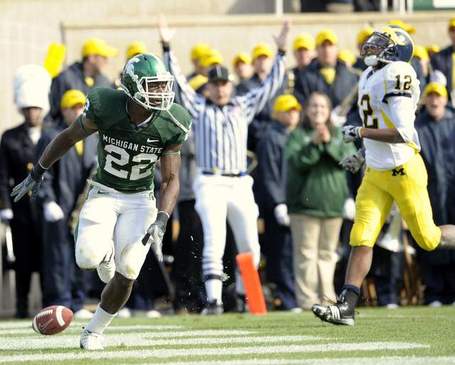 WHEN MICHIGAN STATE IS ON OFFENSE: Kirk Cousins is your quarterback and Larry Caper is your running back. Sounds pretty nice, eh?

LTP says that the Northwestern secondary is the team's best unit:

Our secondary was banged up and still is. It is our strongest unit though. Sherrick McManis has made some incredible picks and is finally at the lockdown mode we expected him to be after missing a couple of games due to injury. Safety Brendan Smith left last week's game, but his replacement, Brian Peters played extremely well. Jordan Mabin at the other corner is the real deal and can hit hard and Brad Phillips has been up and down, but seemst to have regained his '08 form. It is a solid unit when healthy.

. . . but statistics seem to show that they're a very average unit, albeit one that forces a lot of turnovers. They've been giving up 218 yards per game so far this season (almost 12 yards per completion), and have allowed 10 touchdown passes. But, they do have 10 interceptions, including 3 in the past 3 games for the aforementioned Sherrick McManis (who got the fluffy treatment from Teddy Greenstein in yesterday's Chicago Tribune). I'll suggest the same thing that I did before the Michigan game:

But as to the Donovan Warren Sherrick McManis thing: yeah, given our depth at wide receiver, we should just write off whomever he's covering and go elsewhere.

Furthermore, LTP said that Northwestern is already worried about the deep threat posed by Mark Dell and B.J. Cunningham (and I'll throw in Keshawn Martin for good measure); this can't help:

The degree of difficulty increased for Northwestern on Thursday night with the announcement that veteran starting safety Brendan Smith will not play at Michigan State because of a thumb injury.

Smith -- one of only eight players in NU history to be named a co-captain in repeat seasons -- has started 38 games, including the last 19. He also is the leading punt returner for the Cats with an average of 6.6 yards, fourth best in the Big Ten.

With Smith out, Brian Peters will likely make the third start of his career.

Against the rush, Northwestern has been better: they've allowed 716 yards through six games (119 per game), and only 3.48 yards per carry. So, this shouldn't be like it was against Illinois, where (at least in the first half, when we were making a full effort) we could hand the ball off and pretty much be guaranteed somewhere between 6-8 yards. This should be a better test for the offensive line, and for Larry Caper; if we can get solid contributions from the running game, 1) we're going to win this game, and 2) it portends good things for next week, when Iowa will be an even sterner test.

Finally, even though Corey Wootton has been more or less a non-factor so far this year, Northwestern still has 19 sacks on the season, including 4 for linebacker Quentin Davie, and 2 each for LB David Arnold, safety Brad Phillips, and defensive linemen Vince Browne, Corbin Bryant, and Kevin Watt. (The substantial number of sacks from the linebackers and secondary suggest a blitz-happy defense.) We lead the league with only six sacks allowed, and this would be a good week to keep that up, given the Cousins' slight remaining injury, Nichol's injury, and the desire not to burn Andrew Maxwell's redshirt. Honestly, I think we should be all right: the only two players who have really hurt us consistently on the rush are O'Brien Schofield and Brandon Graham, and they're the two best defensive linemen in the conference. If Wootton was healthy, he'd be in that class too, but nothing suggests that he'll be a major threat on Saturday.

THE OBLIGATORY PREDICTION: Wherein I cheat by posting something that I've already written!

The team's play has improved, and Kirk Cousins' return should be a major spark for the team. One thing you didn't mention that may be a factor: I understand that NU's offensive line has been a problem, and that plays right into our hands. MSU had 10 sacks and 18 TFLs against Michigan and Illinois, and the interior of our defensive line has been blasting into the backfield right on the snap.

Honestly, I'm shocked that the line on this game is this high. Everyone remembers what happened the last time NU came to East Lansing, so I'm sure the team and the coaching staff aren't going to be looking past this game. (Many fans, on the other hand, may already have moved their thoughts onto the Iowa game, so the stadium atmosphere may be somewhat lacking.) I think it should be an entertaining game, like most in this series have been, but our defense has really stepped up the past two weeks and I think that trend will continue. 27-17, MSU.