Some Vintage Music for Your Saturday Tailgate

Share All sharing options for: Some Vintage Music for Your Saturday Tailgate 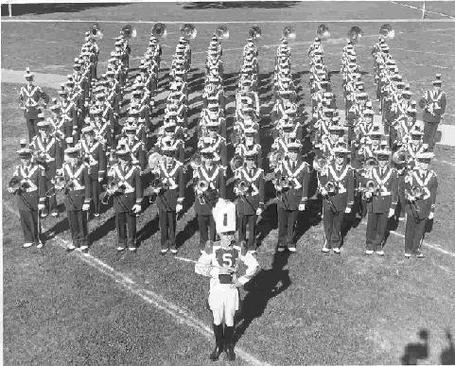 About 20 years too early, but I love the picture.  (Picture from spartanband.net.)

A few years ago, I was digging through my Dad's old records, and I came across an old Spartan Marching Band 45, which apparently my mother had sent him--Mom, like Dad, is an MSU grad--during his first year of law school.  I put it on the turntable . . . and it was short (it is a 45, after all), but absolutely fantastic.  I played the record a lot, and was worried about wearing it out.  (It's been missing its jacket for many, many years, apparently.)  So, this past summer, I finally converted the record into mp3s, and since I'm pretty certain that the copyright on an out-of-print record made more than 30 years ago would have expired by now, I'm sharing the files here.

It's fairly amazing how little the musical arrangements have changed: the outtro on the second pre-game Fight Song performance is different than it is now, and the arrangments of Eat 'Em Up and the Spartan Fanfare are slightly different--but none of these songs will sound unfamiliar.

In any event, for your downloading pleasure:

I can't give an exact date for the songs, but they're probably from the mid-70s.  Consider these a warm-up before the real thing right before kickoff on Saturday night: