Share All sharing options for: Preview: Michigan State vs. Iowa

[Given the time constraints, shorter than usual. --LVS.] 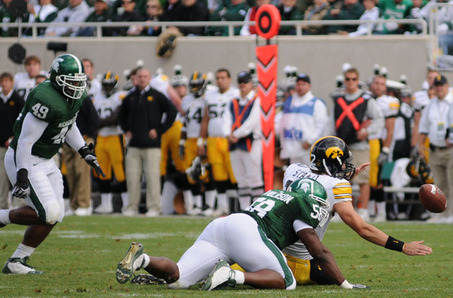 Your MICHIGAN STATE SPARTANS vs. the IOWA HAWKEYES
SPARTAN STADIUM, EAST LANSING, MICHIGAN
7:05 PM ET, BIG TEN NETWORK
WEATHER: 42 DEGREES, 30% CHANCE OF RAIN
Operation "make the season respectable" has largely succeeded following wins in the last three weeks. The opportunity to make the season special begins this week, as a win on Saturday would essentially put MSU in command of the Big Ten title race. The first two years under Mark Dantonio have yielded little grist for complaints; one of the legitimate gripes, however, is that we haven't played well in "big" games -- namely, those in which we're less talented but not absolutely overmatched. (Last season's debacles against Ohio State and Penn State being examples 1 and 1A, of course.) Well, the biggest opportunity of all has arrived. Iowa is undefeated but not unbeatable, and has historically struggled in East Lansing. A win on Saturday would not merely confirm a complete 180 in the season's fortunes -- not unlike what Iowa did last year, by the way -- but also signify a giant step forward for the program as a whole. Can we do it? I'm not wholly optimistic, but a big result isn't out of our reach. 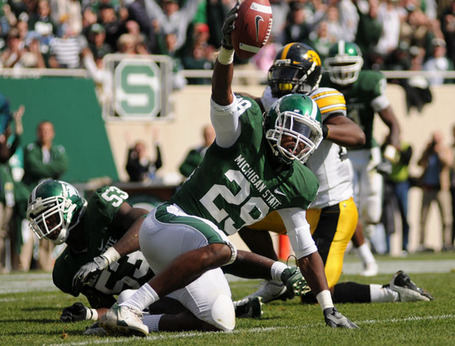 WHEN MICHIGAN STATE IS ON DEFENSE: . . . they're playing a offense whose statistical mediocrity perhaps belies an ability to get things done when it's most needed. Iowa is currently sixth in the conference in both passing offense (47th nationally) and efficiency 58th nationally), and ninth in the league (93rd nationally) in rushing. But, 2 things: having a great defense certainly can make up for mediocre offensive play, and when Rick Stanzi is on, this isn't a terrible offense after all.
And unfortunately for us, Stanzi's coming off probably his most consistent game of the year: a 17/23, 218 yard performance against Wisconsin which included an absolutely gorgeous touchdown throw to Tony Moeaki. The STANZIBALL meme is justified; just ask BHGP:

But holy smokes, is Ricky Stanzi ever trying to raise peoples' blood pressure. For the second straight week, Stanzi threw what we considered his worst, most definitive, Stanziest of the STANZIBALLs, this one a game-opener to Donovan Warren who, with a different set of rules, could have crawled into the end zone unmolested. [ . . . ]

Stanzi's antics have now directly cost the Hawkeyes a touchdown in three of the last four games, a Jarrett Lee-like display that ended a whole lot worse for LSU last season than it has for Iowa thus far. In those three games, each of whom was an unranked opponent now and at kickoff, the average margin of victory has been five points. Obviously, you can't take points off the board in the middle of the game and expect the rest of it to play out exactly the same, but if Iowa wins all three of those games by an average of 12 points instead, we've got a much better comfort level and maaaaybe a better ranking thus far. Probably a moot point unless Iowa wins in Columbus, but something worth pointing out all the same.

That was following the Michigan game, in which Stanzi hit the STANZIBALL nadir by throwing an absolute gift to Donovan Warren; our defense hasn't been the greatest at forcing turnovers, but if one comes gift-wrapped, that could make a big difference in the game.

Stanzi's primary receivers are WR Derrell Johnson-Koulianos and TE Tony Moeaki, both of whom had big games against Wisconsin: DJK (easier this way) had 8 catches for 134 yards, while Moeaki had 3 catches for 55 yards. Moeaki, in particular worries me; we've had all kinds of trouble defending good pass-catching tight ends this season (Kyle Rudolph and Garrett Graham, in particular) and Moeaki is probably better than either--he's finally showing the potential that's been wasted by injuries during the past few seasons, and in 4 games this season, he has 20 catches (to lead the team!) for 247 yards and four touchdowns. He's a very difficult matchup for our linebackers and safeties (6'5", 250); hopefully we have some sort of scheme to slow him down.

MSU linebacker Greg Jones said the plan of attack is pretty straight forward for stopping a duel-threat like Moeaki.

"He can only do so many things at one time - he's (either) gonna block or go out for a pass," Jones said. "He's gonna use his size to his advantage, and if I was that big I would too, so it's gonna make it pretty simple."

Do your thing, Greg.

Meanwhile, in the wake of Shonn Greene's departure and Jewel Hampton's season-killing injury, Iowa has done a passable job in the run game -- led by freshmen Adam Robinson and Brandon Wegher:
Robinson's statistics include a 91 yard, 1 TD performance against Wisconsin. Given the way that Jerel Worthy and Colin Neely have been playing the past few weeks, I definitely think we can stop Iowa's ground game. I'd just rather that we don't make the mistake Michigan did and sell out to get there:

Speaking of the rush, hello half of the state of Michigan: if Michigan's game plan was explicitly "Make Stanzi beat us," they went about it the correct way. Adam Robinson and Brandon Wegher were effectively minimized as threats, combining for 91 yards on 23 carries. Worse, the two garnered only three first downs on the ground (all Robinson in the third quarter), with Stanzi registering three of his own. That's not exactly the type of production that usually leads to Iowa scoring 30 points.

Fortunately, with Michigan putting 11 players, 4 couches, 3 cheerleaders, and Sad Michigan Girl in the box, that left the secondary very susceptible to big plays, and Moeaki's delay routes as the receivers ran off coverage led to two easy, easy touchdowns, the second of which accounted for Iowa's last points of the day.

Given our relative strength on run defense and the secondary's previous troubles, I'd much rather we do the converse: focus on stopping the pass and make the two freshman running backs beat us. (Sounds a lot like Iowa's probable game plan.) Of course, the two aren't mutually exclusive: cranking up the pass rush has gone a long way toward helping the secondary do its job; getting pressure at the line of scrimmage will obviously be beneficial for the run defense as well.
Finally, it's worth noting that we have 21 sacks in 7 games, and Iowa has allowed 15. Bryan Bulaga, Iowa's huge offensive lineman, is beastly when healthy, but he hasn't been all season, and looks to be a shadow of his former self. Please, please, please, get pressure on Stanzi. 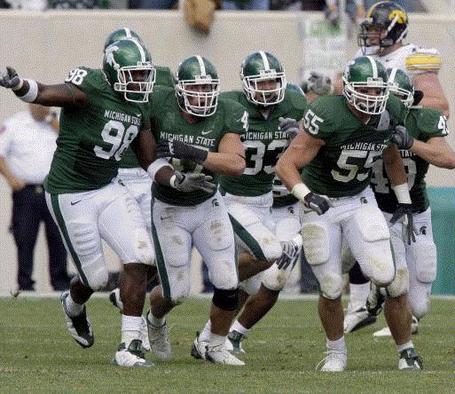 Not our offense, but who cares!

Darryl Clark's statistics are particularly scary. This is a very, very, very good Iowa secondary. Amari Spievey is an NFL player, Shaun Prater is solid and is additionally some sort of talisman for the defense (he didn't play in the defense's worst outings of the year), and the two safeties -- Tyler Sash and Brett Greenwood -- have combined for 8 interceptions. Combine that with two excellent linebackers (A.J. Edds and Pat Angerer) and a havoc-wreaking defensive end (Adrian Clayborn) and . . . uh, yeah, you'll understand my pessimism during the BHGP podcast.
Giving Cousins time will be absolutely key; 3 of his 4 interceptions this year have come when he's pressured. If he's hurried, he's going to make mistakes and Iowa will capitalize. If he has time . . . it's not going to be pretty but I have enough faith in Cousins to believe that he'll be able to move the ball. Iowa only has 13 team sacks on the year -- not an overwhelming number for a defense of this caliber -- and we'll need to minimize that number on Saturday night.
Iowa's defense, on the other hand, can probably be run upon:
(N.B.: John Clay wasn't exactly himself for most of the game last week.) Those aren't horrible numbers by any means, but they aren't lights-out, either -- sixth in the conference. If there was one week where we'd massively benefit from a breakout game by Larry Caper -- yep, this is it. If we can start picking up some yards on the ground, we might be able to get Greenwood and Sash to cheat up and thereby take away their ability to snag Cousins' passes away. (Also a worry: the ability of our freshman RBs to hold onto the ball. Please, no fumbles.)

That, ultimately, is my key to the game: we have to get something done on the ground; we weren't great last week against Northwestern, and that isn't going to cut it this week. Our passing game is very good, but their pass defense is better, and if Cousins has to throw the ball 40 times, this game is not going to end well.
FINAL PREDICTION: A few weeks ago, before Michigan went to Iowa City, Brian wrote this:

The prediction below is weird: it builds in what appears to be a 50-50 shot at Iowa having one more game-crippling mistake than Michigan. I think if M gets that game crippling mistake they will be in it at the end with a chance to win, possibly attempting to defend and Iowa game-winning drive. If they don't I think they end up in a hole and threaten to break out of it from time to time but never actually do so, with the cold and the crowd and the Iowa defense finally reining in Forcier when the game's on the line.

Of course, Michigan did get that game-crippling mistake, and Iowa still won. Iowa's resiliency has been remarkable. They were down early to Wisconsin, Michigan, and Penn State, and yet, they didn't panic: they let their defense assert itself and chipped away until the other team, battered and broken, had nothing left. This is an awfully impressive team: by far the best we've played. They're not unbeatable, and we've been pretty resilient ourselves: we were 1-3, and now, if we win tomorrow, we're probably the favorites to win the conference. But to get there, we'll have to play much better than we have at any time this season -- a Michigan game-type effort, minus the 4th quarter collapse -- and we will have to be there to take pick up and take advantage of the giveaways that Iowa will almost inevitably make.
It's a night game, the team will be hyped, the atmosphere will be unbelievable, and we've got something BIG to play for. I wouldn't be at all surprised if we pulled this game off -- a la Wisconsin in '05 '04 -- but to predict a win is just a step too far, I think. Iowa 24-23.