Share All sharing options for: Odds and Ends, Iowa Edition 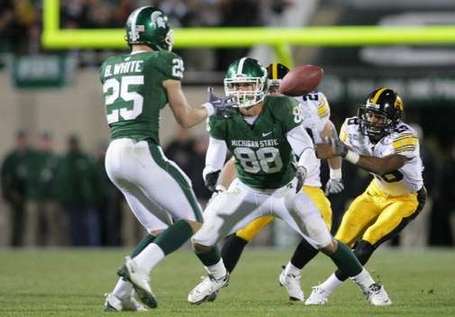 So, I'm not particularly wild about reliving Saturday night, but it's worth doing so to chime in on a few major points of contention on the internets:

First, obviously, the personal foul penalty on Jeremy Ware.  I'm going to bump a comment by KJ, because it succinctly reflects my general thoughts about the entire situation.  (Zapruder-quality video of the incident is available at that same link, courtesy of Seer.)

I’m afraid that, if the receiver in fact suffered a concussion, that’s pretty damning evidence in and of itself.

The late nature of the call is pretty aggravating, but it’ doesn’t really change the final verdict.

Now, my longer version: I've watched the replay several times now, and I think it was the correct call.  You can pretty clearly see the Iowa player's head snap back from the helmet-to-helmet contact, and that's a play which referees have been calling penalties on this year.  Of course, that doesn't address the entire issue: it was obnoxious that the penalty wasn't called until the referee realized the severity of the injury.  Based on that alone, I think the criticism that the call was based on the result of the play, and not what was seen during the play itself, is valid.  OTOH, I've personally advocated for instant replay in sports--particularly in baseball, where the general concerns about replay seem most salient--because completely aside from the process reached to get there, ultimately, I want the officials to get the call right.  Here, I think they got it right, so the while the way they got there was lame, I'd be a hypocrite (and ultimately missing the point) to complain about process.

Second, however, I'm torn as to whether this should be a penalty at all.  Ware seemed to lead with his hands first, directed at the shoulders, and, for me, it's difficult to divine any malicious intent on his part.  Essentially, he was penalized for making a good football play--and that really sucks--but at the same time, if we're really concerned about stopping injuries, it's probably inevitable that some non-malicious plays end up as collateral damage for the greater good.  IMO, This is one of those plays.

Finally, I think that focusing disproportionately on this penalty really isn't useful or good.  Two full touchdown drives happened after the play occurred.  After a loss as devastating as this one was, there's a natural inclination to grab onto the instances where you reasonably believe that your team has been screwed (and I'm not immune), but the decisive events in this game happened well after the controversy, and were, at best, tenuously related to it.  Had we stopped Iowa on the last drive, none of us would have remembered the penalty a week later.  By asking the conference to review the penalty, our coaching staff is in effect at least partially blaming the loss on the officials rather than our own team's defensive failings at the end of the game, and that's a bad message to send to the team.  End of.

The end-of-game clock situation.  From my vantage point at Spartan Stadium, everything looked kosher, and furthermore, when your own coach investigates the situation and then expressly disavows the argument . . .

[Dantonio] had a different viewpoint on some things after viewing the film, as is usually the case. He took out the stopwatch earlier in the day and confirmed that the game clock was correct on Iowa's final drive.

The defense at the end of the game.  Ugh, the defense.  The post at The Rivalry this morning (spotlighting TOC's own DrDetroit) is painful but correct, I think.  For 58:30, we played our best defensive game of the year by being aggressive both in coverage and with pressure, and then, at the critical time of the game, we completely abandoned what had been working.  Dantonio's comment last night was to the effect of, "had we brought pressure and given up a big touchdown play, everyone would be criticizing us for that too";  it'd be naïve to think that there would be no criticism if that happened, but nonetheless, I don't think that's a valid argument.  First, we had a lot of success in our base defensive package, and there's no special reason to believe that Iowa would have finally found a way to master it in the last minute of the game.  Second, this exact situation has happened several times previously this season!  CMU, Michigan, and, to an extent, ND, were all games in which the opposing offenses were able to move the ball at will-and in critical situations, no less-once we switched to a more passive style of defense.

It's like the bizarro version of what happened to Ohio State in the Fiesta Bowl last season.  OSU defended Texas effectively all game long by being largely restrained in attempting to rush Colt McCoy, but instead using their manpower to try to choke off Texas's receivers.  But, in the deciding play of the game, OSU called a monster blitz, leaving Quan Cosby relatively open to score.  Of course, our problem was going away from pressuring Rick Stanzi, not the opposite, but the point is the same: at the game's critical juncture, we went away from the type of play that brought us there, and we paid for it.

Calling our scheme a "prevent defense" somewhat obfuscates the issue, because those words have such a negative connotation amongst football fans, but it's inarguable that we played more passively by reducing the pass rush and by giving Iowa's receivers more cushion.  Either way, it sucked, and a good argument can be made that this defense has proximately caused three losses this season.  Three gut-wrenching, awful losses.  Ugh.

Finally, my own complaint: we need a MAJOR improvement in offensive goal line situations.  I mean, this is just ridiculous:

It'd be one thing if this was the first time.  But this same situation happened against Northwestern, and Michigan too.  We got away with it in those first two games, but here, our inability to cash in any of 4 attempts inside the two yard line really, really screwed us.  It's generally the official TOC editorial policy not to second-guess playcalls that don't work out well, because it's just too easy.  But, erm, going back to Baker on third down, when we were about 3 inches from the goal line and have a 6'3" quarterback who could have just sneaked it forward instead of making him do a long, slow handoff to the smaller of our two running backs was GAHHHHH unbelievable.  Going forward, goal line offense should, uh, be a point of emphasis.

Bitch now in the comments about whatever your heart desires, or forever hold your peace.