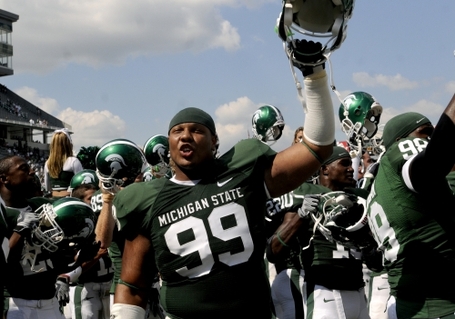 Your MICHIGAN STATE SPARTANS vs. the MINNESOTA GOLDEN GOPHERS
TCF BANK STADIUM, MINNEAPOLIS, MINNESOTA
8 P.M. (ET), BIG TEN NETWORK
WEATHER: MOSTLY CLEAR, 40 DEGREES.
[Note: this preview is going to be much shorter than usual, as yrs truly his his head on a pipe in the basement this morning, and has had a vicious headache ever since.  Hopefully I won't have a seizure while typing this.  Also, if my prediction is horribly wrong: built-in plausible deniability!  --LVS.]
Here's what you need to know: Minnesota was not a good football team before the loss of Eric Decker, and much worse without him.  Support:
MINNESOTA TEAM STATISTICS

I mean, there's little that can be said which isn't already reflected in that chart.  In the major statistical categories, Minnesota's best conference rank is 7th, and best national rank is 70th.

The passing game has been the best weapon for Minnesota so far this year (although, in comparison to the rushing game, that's not saying all that much).  But, for some perspective, of Minnesota's 1495 passing yards this season, Eric Decker has 758 -- more than half the team's total -- and 5 of the 8 touchdown passes Minnesota quarterbacks have thrown this season.  Without him, Minnesota is left with a shell of it's former passing game, and has virtually no running game to speak of.  MSU's rushing defense has been mostly excellent this year; without having to worry about Minnesota doing much in that regard, we should be free to focus on stopping the pass.  (More 3-3-5, plz!)

On defense for Minnesota, things aren't much better.  We've complained all season long about MSU's performance on defense, but we're giving up nearly nearly 90 fewer yards per game than the Gophers.  Minnesota has had a lot of difficulty getting to the quarterback, and the only occasions where Kirk Cousins has had difficulty this season have been when he's under pressure.  Unless a pass rush magically appears, Cousins should be able to pick this defense apart.

Many Gopher fans would like to see MarQueis Gray take more snaps tomorrow.  For every one pass attempt this season, Gray has rushed the ball three times.  Some of that is obviously a function of him playing situationally, but I'd imagine we'll approach playing him in the same way we did for Denard Robinson -- and we made Robinson look absolutely silly.  Gray concerns me more than Adam Weber does, simply because he's quite talented and is something of an unknown quantity -- i.e., he's capable of playing horribly, but he's also capable of doing some good things, whereas I see very little possibility of Weber having tons of success against us.  Either way, we should be prepared.

In summation: we're more talented than Minnesota at nearly every position, and have performed better than them in nearly every meaningful statistical category.  This game is in Minneapolis, true, but the Gophers are only 2-2 in the new place; it's not like the new stadium has been particularly foreboding for opponents this season.  If MSU avoids shooting itself in the foot too many times, this game shouldn't be close.  27-10, MSU.*

Your own predictions in the comments, please!