Share All sharing options for: Off and Running: Michigan State 97 Florida Gulf Coast 58 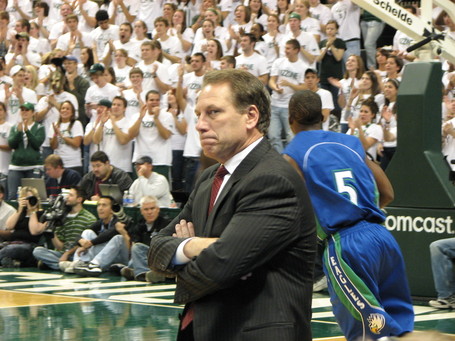 39-point wins do not satisfy this man.

Near Calamity: So I had the good fortune of sitting in the second row behind the scorer's table for the season opener.  For a moment, though, my proximity to the court enhanced the panic that raced through my heart when Draymond Green went down with a leg injury of some sort after lunging at Reed Baker in the waning moments of the game.  Green was looking right toward my section in the split second after the injury occurred.  I could read his lips: "Oh, S---."  And his body language was the language of a man who thinks his basketball season might be over.  He was helped off the court and into the locker room with staffers supporting him on both sides.

Thankfully, he emerged from the locker room a few minutes later, strolling by my seat with no limp whatsoever on his way back to the bench.  It must have been a cramp that felt like something of a more structurally-damaging nature (Rexrode confirms).

Elsewhere: A 39-point win is, of course, exactly what you want in a college basketball season opener.  But I do have some concerns.  Let's start with those.  Big picture, the question marks about our interior play cropped up some in the first half.  The Eagles made 9 of 15 two-point FG attempts (60.0%) before the break, and MSU only pulled down 5 offensive rebounds in the first 20 minutes.  Those trends reversed themselves in the second half, as FGCU shot just 36.4% from inside the arc after the break and MSU posted a stellar offensive rebounding percentage of 47.8% (on 22 offensive rebounds) for the full game, but the lack of an experienced interior player taller than 6'8" could be an issue at times this season.

One of the reasons it may have been more of an issue tonight was that Delvon Roe looked decidely less than his normal self.  He was clearly still rusty as a result of the concussion he suffered in the first exhibition game, shooting 0-2 from the floor and fouling out in just 13 minutes of play.

Raymar Morgan, meanwhile, made an unexpected appearance in this game, playing 9 minutes in the first half.  Unfortunately, those minutes may have set him back in the confidence department.  He missed all 4 shots he took from the field, as well as all 4 shots he took from the free throw line, and turned the ball over on a travelling call in transition.  He sat out the second half with a bag of ice wrapped around his ankle (some combination of precauation and a tweak to the ankle, according to Rexrode).  I don't think we can expect a significant contribution from him next Tuesday. 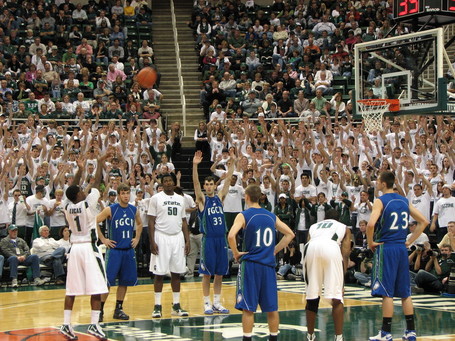 OK, on to the good stuff (Official box score is here.):

As expected, this was an up-tempo game: 78 possessions.  So giving up 58 points was a pretty solid defensive effort from a points-per-possession perspective.  Some of that was a function of the Eagles just flat shooting the ball poorly, though.  They made only 4 of 20 three-point attempts and just 12 of 25 free throw attempts.  Giving up 25 shots from the free throw line to the Eagles (FT rate= 43.9%) is a little concerning, again highlighting the potential interior defense issues.  Reed Baker was stymied for most of the night, scoring only 9 points on 2-10 shooting from the field.

After a fairly slow start (FGCU led after 10 minutes), MSU eventually overwhelmed the smaller Eagles, as evidenced by the 37 shots Spartans took from the free throw line.  FGCU threw some zone looks at MSU to try to compensate for their lack of size, but the MSU players were pretty efficient in taking the zone apart, moving the ball around the perimeter to get good 3-point looks.  There were a couple bad turnovers early, but MSU's turnover percentage for the game (16.9%) was quite acceptable.

Next up: The level of resistance increases substantially. The Gonzaga Bulldogs.  Next Tuesday night at 8:00.  In the friendly confines of the Breslin Center.  ESPN.

P.S. As we hoped, two banners for the pre-Izzo Final Four appearances have been added to the collection of five Izzo-era banners that were unveiled at Midnight Madness. 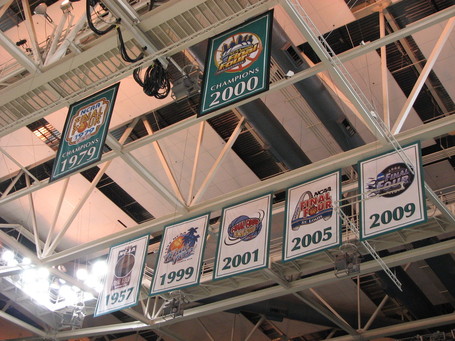 P.P.S. The backs of our jerseys are psychedelic, man. 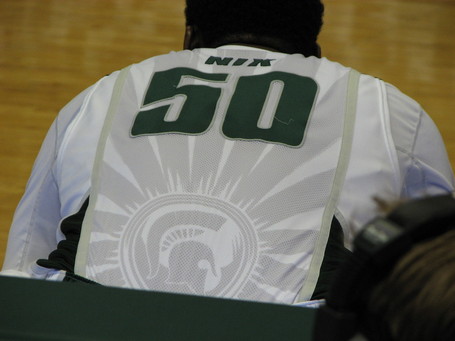