3:30 (ET), ABC (coverage map)
WEATHER: 52 DEGREES AT KICKOFF, TEMPERATURE FALLING AFTER DUSK.
Hey, a game that's not the most important of the season! Your Spartans obviously did the heavy lifting last week against Purdue; in all likelihood, this game is not about whether MSU will make a bowl, but rather, about whether we're going to San Antonio or Orlando or, of course, rollin' down Woodward to Ford Field (!). Penn State, after a season that has to be characterized as quite disappointing, amazingly still has a shot at a BCS berth. You know the backstory: last season, PSU absolutely demolished us; the season before, however, was good times:

It appears that the play-by-play guy attended the Joe Buck school of announcing excitement. Also, I miss Devin Thomas.

So, here cometh TEH GREATEST RIVALRY GAME IN ALL TEH LAND, and the opportunity to beat a team with a pulse for the first time this season. (Says the guy whose team's best win is against Temple. w00t.) The 8-million member PSU blogosphere and commentariat seems surprisingly reticent about this game. But, after last week's defensive fiasco I'm simply not comfortable picking us to win against teams with competent offenses. Penn State is such a team. I'd love to be proven wrong. 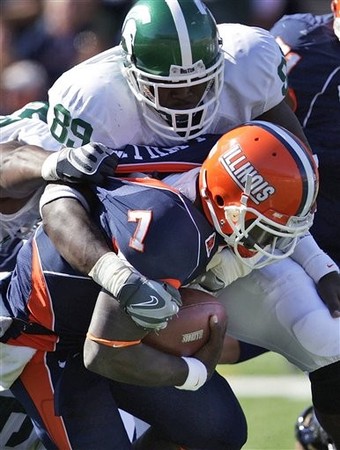 WHEN MICHIGAN STATE IS ON DEFENSE: At this point, I think the secondary is probably going to suck no matter what we do, so we might as well stack the box to try to stop the run and get as much pressure on Darryl Clark as possible. Indeed, as RUTS told us, this is what you want to do with Clark:

He's like about any other good, but not great, quarterback. If he has a clean pocket and can set his feet, he's as good as anyone in the country. If he gets hit too much, he gets rattled and starts making bad decisions with the ball. In that sense, he can be knocked back into looking like a talented quarterback in his second or third start -- he thinks he can make throws that he can't actually pull off.

Clark struggled mightily in the Iowa and Ohio State games--and even in the Illinois game--because he was under pressure (ding ding ding da da ding ding). Pressuring him may allow Clark some opportunities to scramble (as Brian said earlier this year, he's "not Michael Vick but isn't John Navarre, either."), but it's probably the best chance to contain the PSU offense. PSU partisans seem to think that our defensive line will have success against their offensive line, and pressure Clark heavily; I'm not so certain. Many anticipated that Penn State's offensive line was going to be the downfall of the team this year, as it was the most inexperienced group in the conference. PSU has allowed only 12 sacks on the season, although it looked overmatched against Adrian Clayborn and Cameron Heyward, among others. But, uh, we don't have Clayborn or Heyward; we've got a defensive line which failed to pressure Joey Elliott (until the last play, of course), and hasn't proven the ability to apply pressure on its own. My suspicion is that, if PSU is content to throw from three-step drops, they'll have a lot of success: we won't have the ability to get to Clark that quickly, and our secondary is obviously vulnerable. Bottom line: stack the box, try to get pressure, hope for the best.

And, about those guys Clark will be throwing to: RUTS sez . . .

Starting WR Chaz Powell is out for the game with a shoulder injury. In his place, you'll see a rotating group including the very tall Brett Brackett and the very quick Curtis Drake. Maybe true freshman Justin Brown gets in the game, but I doubt it. Graham Zug had a nightmare game against Indiana last week, but that was mostly due to fumbling punts. He runs good routes and gets open against passive zone coverages. Really, that goes for the whole group -- if you can press and bump them, they become ineffective quickly. [ . . . ]

Derek Moye is probably our best receiver, but he was totally shut out by Ohio State's press coverage and only had two catches for 28 yards against Indiana. Because of that, I suspect PSU will make an effort to get him involved quickly.

Moye is indeed good: 41 catches for 676 yards and 5 touchdowns this season. He's 6'5", 195 pounds . . . and if you're thinking, "holy hell, he's Mike Floyd in disguise," well, yeah, me too. He's not quite there, talent-wise, but, erm, I wouldn't want to be fighting for a jump ball against him. I suspect that our cornerbacks wouldn't want to be, either. And, yeah, about that Quarless guy: he reminds me a lot of Kellen Davis in that he's ludicrous athletically, but the results don't quite meet the expectations. But, the same could be said of Garrett Graham, and that didn't end so well for us earlier this year.

This is probably Evan Royster's last regular season game for Penn State, as most expect him to jump to the NFL.
Last year, he only carried the ball 12 times against MSU, but those carries were relatively successful, as he averaged 6.6 yards per game. This season, he's been a bit up-and-down: he had big games against Northwestern and Minnesota, but not-so-good efforts against Iowa and Ohio State. MSU's rush defense has been mostly a positive this season, although last week was a bit of a regression. I suspect that Royster will approach 100 yards but not be the deciding factor in this game. His backup, Stephfon Green, has intermittently battled injuries and hasn't played much or well since the Illinois game much earlier this season. 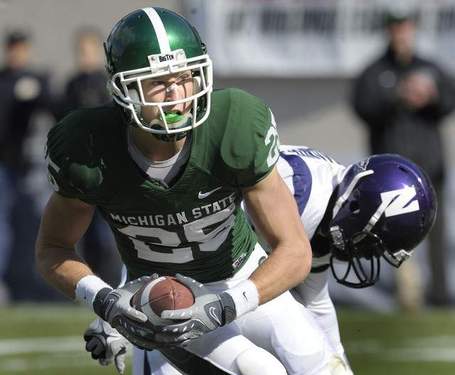 Safe to say at this point: one of my all-time favorite Spartan football players.

WHEN MICHIGAN STATE IS ON OFFENSE: . . . we need for Kirk Cousins to have the best game of his career. As a preliminary matter, let's stipulate that we're going to get basically nothing against Penn State on the ground: the Lions are 8th nationally against the run, and our rushing offense is not good. The goal in this game should be to do just enough to semi-effectively set up play action.

Ah, so the main event: MSU's passing offense vs. Penn State's pass defense. It starts wtih the offensive line, obviously. Penn State doesn't have Tamba Hali or Courtney Brown or anyone of similar fear-producing ability, but the stats are certainly there: they lead the conference in sacks, and while Brian noted that:

[t]he numbers are impressive—PSU is 11th nationally with three sacks per game—but there is the whole schedule thing to take into account. Jack Crawford has four sacks, all of which come against the Akrons and Temples on the schedule. In Penn State's three real-ish games, they acquired one sack (Odrick) against Minnesota, three (Crawford, Latimore, Stanley) against Illinois, and two (Hull and Crawford/Lynn) against Iowa.

. . . Penn State sacked Forcier/Robinson 5 times, and then, the next week, sacked Mike Kafka 6 times. Since then, things have cooled down a bit: they weren't able to sack Terrelle Pryor (although Pryor is surely one of the most difficult sacks in the country), and were only able to get to Ben Chappell twice last week. Nonetheless, this is an impressive line; they're led by scary beast Jared Odrick, who has 6 sacks, and the aforementioned Jack Crawford, who now has 5.5. RUTS says that:

Penn State loves to just send the defensive line if they can get away with it. The defensive scheme actually depends on it, but PSU's defensive ends have been several notches below their predecessors. There's no Aaron Maybin, Maurice Evans, or Tamba Hali on this defensive line, so they'll send linebackers on occasion, and maybe mix in a corner blitz once or twice per game, but that's it.

We can't let them get tons of pressure from the front four alone. I know it's tempting disaster to say that I *want* Navorro Bowman, Sean Lee, and the corners to blitz, but Penn State blitzing and leaving the secondary exposed is how Cousins will be able to throw for lots of yards.

Penn State can be thrown on, but they do their best to protect any obvious liabilities in the secondary. Free Safety Nick Sukay has steadily improved throughout the year. Drew Astorino (#28) plays the other safety position, and it's no secret that he's trying to fight through a shoulder injury. CB A.J. Wallace sustained a concussion last week, he's listed as "possible" for Sparty. So there may be opportunities for you in the passing game.

So, PSU is good, but they're not scary in the way that Iowa is: this season, the Lions have allowed 252 yards passing to Northwestern, 263 to Illinois (!), and 298 last week to Indiana. (Note that they won all three of those games, however.) Quite frankly, our passing offense is better than any of those teams'. I think Cousins has a big day, and throws for at least 250 yards; look for B.J. Cunningham to play the Devin Thomas role this time around. If he's able to deliver, Cousins stands in line for first team all-conference honors, so there should be some personal motivation, too.

Clark picked our defense apart last year, and while you don't have Derrick Williams anymore, our pass defense is even worse this time around. Also, I have distressing visions of Jared Odrick pwning whoever's blocking him and not giving Cousins enough time to be comfortable.

More generally, Dantonio has done a lot of good things during his time at MSU, but beating teams with appreciably more talent certainly hasn't been one of those things. So, I'll remain skeptical until we finally win one of these games. It's at home, which is good, and I could definitely see the special teams stats ending up very lopsided in our favor. But PSU is the better team, and you're playing for more: a win for us would upgrade our bowl game slightly, but a win for PSU might send you guys to the BCS. So, an upset isn't out of the possibility, but I'm not particularly optimistic.

I wrote that yesterday morning, and honestly, I'm a bit more optimistic now. Penn State fans seem quite worried about this game, and one columnist even questions whether Penn State's players even have their hearts into the game anymore. Which, like, what? Even if that's true, you're playing for the BCS! I'd dismiss it out of hand if the sentiment didn't seem to be a common one across the PSU internets.

One thing that doesn't fit into my normal preview format: if you've been reading previews of this game anywhere else, you'll know that PSU's special teams have been an unmitigated disaster this year, and ours have been very good. I'm normally skeptical that special teams play has any predictive value, but here the discrepancy between the teams seems so great that it may indeed be relevant this week. Keshawn Martin, Brett Swenson, Aaron Bates: keep on doing what you do so well. kthx.

Nonetheless, this is a pretty talented football team we're playing. PSU is excellent on defense, and the offense -- with many of the same players -- ripped us apart last year. It seems that I'm saying this every week now, but truly, our defense will determine whether we win this game. If they show up, we have a chance. If they play like they did last week, we don't. It's awfully tempting to say that MSU wins this game on the strength of the passing game and special teams play. But, visions of Quarless and Zug running rampant across the middle of the field prevent me from tempting fate, for now. Penn State 31, Michigan State 27.

Your thoughts welcome, of course.