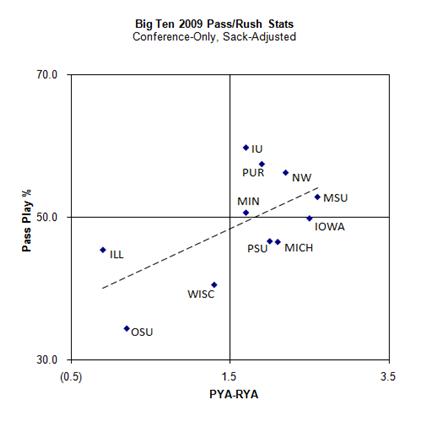 The premise here is that, the better a team is at passing the ball vs. running the ball, the more often that team will pass the ball.  And, for the most part, Big Ten coaches look pretty darn rational.  The data points show a clear linear trend.  The teams above the trend line (Indiana, Purdue, Illinois) were generally playing from behind and would have passed the ball more out of necessity.  The teams below the trend line, on the other hand, are teams that were usually playing with a lead (Ohio State, Wisconsin, Penn State) or had interception-prone quarterbacks (Michigan, Iowa).  (Data are not adjusted in any way for interceptions.  Also, interpreting the data for teams with running QBs like Illinois and OSU may not be quite so straightforward.)

I had originally constructed this scatterplot to see if I could confirm my intuitive judgment that the MSU coaching staff didn't utilize the Cousins-led passing attack to the full extent it should have.  If you trust the dashed trend line as a good approximation of where a team's run-pass balance should be based on the relative strengths of its passing/rushing attacks, though, the aggregate data would indicate the balance was about right.

One caveat: MSU's rushing numbers may be skewed high by two Keshawn Martin end-around runs totaling 154 yards.  Take those two runs out of the sample and MSU's rushing yards/attempt figure drops from 4.6 to 4.0 and MSU's data point on the scatterplot moves very close to the right-hand boundary.  Of course, it's possible other teams also have big runs on nonstandard rushing attempts in their data.  And you could argue the Keith Nichol garbage-time TD passes vs. Wisconsin and Penn State skew the passing numbers upward, too.

Regardless, MSU did attempt to pass the ball at the 4th highest rate in the conference, behind two teams that played from behind most of the season (probably a 50/50 split for MSU on playing from behind/in front) and a team that runs a pure spread offense designed for frequent, short passes (Northwestern).

Still, I can't shake the intuitive judgment that, while MSU may have passed the ball with a reasonably-high frequency, it did so in a much-too-predicable fashion.  Fairly-fresh-in-my-mind example: The opening drive of the Penn State game (when MSU had won the toss and chosen to take the ball first).

On the first play, White went in motion from right to left toward two receivers on the other side.  At that point, I'm pretty sure every MSU fan in the stadium--not to mention the Penn State defense--knew what was coming: a flare pass to White behind the line of scrimmage.  The Penn State defensive backs moved aggressively toward the line of scrimmage and blew the play up.

Next up?  Well, if you didn't run the ball on first down, you certainly have to try to run it on second down, right?  The result was, not surprisingly, a loss of yardage.

Finally, Kirk Cousins gets the chance to throw the ball downfield on the third down.  But the Penn State defense knows what's coming, Cousins can't find an open receiver, and he's forced to scramble for a gain well short of the first down.

So there's an example of MSU passing on 2 out of 3 plays, but doing so in an entirely predictable and defensible manner.  With Kirk Cousins--the clear front-runner for first team All-Big Ten quarterback, and perhaps Big Ten Ofensive POY, in 2010--back for two more seasons, that kind of predictability (predicated on the notion that running the ball on early downs is the basis for your offense, darn it all) sure seems like it wil continue to be an impediment to the team's success if it isn't addressed by the coaching staff--before the bowl game, ideally.

P.S. If I can work up the gumption, I'm intending to go through this same exercise for defensive stats.