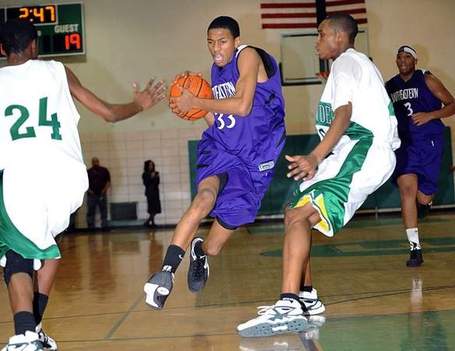 "Coach Izzo is one of the top coaches around, and Michigan State has one of the top programs in the country over the past 10 years," he said. "I knew this was the place for me, so I wanted to make my decision early and move on with the rest of my high school career."

He indicates he made the decision after attending the MSU/U-M football game four weeks ago.

Kearney is one of the more promising wing-types in the class of 2011. This sinewy scorer needs strength to take his game to another level, but he has definitely improved each time out. He has nice length with long arms and he may grow some more considering how lanky his frame is. He is a smooth scorer who has a nice mid-range pull-up game and his other perimeter skills are progressing as well. He advances the ball well in transition and he is quite effective slashing his way to the rim utilizing his length and bounce. In addition, his court demeanor is terrific and he never appears to get rattled at any given time. Kearney needs to continue to polish his jump shot and handle (going left) to take his game to another level, but overall he does have most of the intangibles scouts and coaches look for in a high-level 3-man.

Kearney's strength is his handle and ability to get to the hoop. In the few games I saw him play last year he made several jaw dropping moves, leaving defenders frozen as he blew past them on the way to the basket.  The only problem was that at times, after badly beating his man, he would miss the lay up.  Word from the AAU circuit is that Brandan has really improved in both this area and with his shot.

One of the more high-profile in-state recruits who upped his standing even more by receiving good reviews after being selected for the USA 16-and-U team.  Kearney has received some criticism for not being aggressive enough but has also been praised as having good leadership skills and above-average ball-handling.  Talked about in some circles as being an option as a point guard which would let him use his size and length for real mismatches.

Give that Kearney has Wolverine ties (he's Braylon Edwards' cousin), an MSU commitment didn't seem like the most likely outcome early in his recruiting process.  His decision to commit to MSU is likely at least partially driven by the respective roster configurations of the two teams.  The spots available at U-M for wing guys closed quickly with the commitment of Carlton Brundidge and the 2010 scholarship slot presumably being held open for Trey Zeigler.  MSU, meanwhile, clearly needs 2-3 wing players in its 2011 class with the graduations of Chris Allen and Durrell Summers after the 2010 season.  (Updated projected roster.)

Regardless of the events that led to this commitment, we're thrilled that Kearney has decided to become a Spartan, as he certainly had some pretty good options outside the state of Michigan.  He becomes a key part of the quasi-rebuilding process that will happen after the Lucas/Allen/Summers/Lucious/Roe/Green playing group departs over a two-year period.  He and Keith Appling will form a versatile back court, with both guys having the abilities to handle the ball and score on the wing.  Russell Byrd, meanwhile, will provide the pure-shooting option on the perimeter.

Three scholarship spots remain for 2011.  The list of potential players to fill those spots is here.