Every week's preview introduction seems to warn of ever-more-dire consequences if we lose the game on that particular Saturday.  Well, this one's easy: lose this game and:

So, now that we have that out of the way, let's get to the preview!  This week with extra malaise!

Western has had an up-and-down season, to say the least.  They're 4-5; the losses are an opening-week blowout at Michigan, a close road loss to Indiana, another blowout at the hands of Northern Illinois, a home loss to Central Michigan, and a defeat last week at Kent State.  WMU was expected by many to challenge for their conference title, so a 4-5 record is a pretty huge disappointment for Bronco fans.  (Sound familiar?)  Nonetheless, this is an experienced team led by an accomplished senior quarterback.  After the CMU game, I doubt that there was any chance we'd look past WMU . . . but if we somehow do, the Broncos may be talented enough to take advantage. 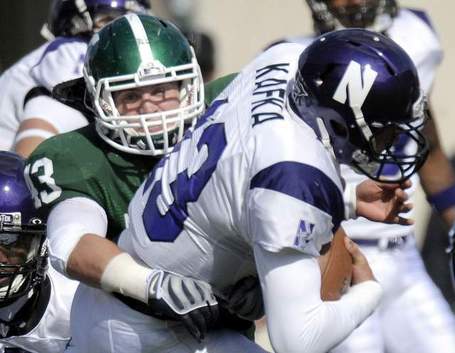 WHEN MICHIGAN STATE IS ON DEFENSE: Given the state of our defense, this advice probably will apply to all of our remaining games, but none more than this Saturday's: sell out to defend the pass, and make them beat us with the running game.  Brandon West is the primary Bronco running back, and while his numbers (161 carries, 824 yards, 5.1 ypc) aren't terrible, the majority of those yards have come in three games: two against two middling-to-bad MAC rush defenses (Buffalo and Toledo), and one 1-AA opponent (Hofstra).  As a team, WMU's rushing offense is 10th out of 13 in the MAC, averaging only a shade over 100 yards per game.  Our rush defense has been good.  We should have no problem stopping their rushing attack; in fact, every time they hand the ball off, it's essentially a win for our defense.

But the WMU passing offense . . . that's a bit different.  WMU is 3rd in the MAC in passing offense (284 yards per game) and 6th in pass efficiency.  Tim Hiller is obviously a standout and a potential NFL prospect; by the time he leaves Kalamazoo, he'll be the owner of every significant WMU career passing record.  He's big (6'5" and 234 pounds) and not a real scrambling threat; this is disturbing only because that's the mold of most QBs that have given MSU real trouble this year (Clausen, Tolzien, Weber, etc.).  In his other two starts against Big Ten defenses this season (and mediocre ones at that--Michigan and Indiana), Hiller was decent:

The Michigan stats are greatly inflated by a 73 yard garbage-time touchdown pass.  The Indiana stats aren't terrible, but almost certainly won't be enough to win the game for WMU on Saturday.

Statistically, Hiller hasn't been as good this season as he was last year.  His rating is way down, as is his completion percentage, his yards per game, yards per attempt and completion, and his TD-INT ratio.  (All of this probably has lots to do with the fact that WMU's top two receivers in 2008 both graduated.)  However, his sacks are up -- 16 already this year, against only 14 for the entirety of last season.

Hiller's main targets this year are Robert Arnheim and Juan Nunez, but the main thing that's notable about the receiver corps is how deep it is and how well the Broncos spread the ball around: 5 receivers have more htan 30 receptions on the year, and a sixth has more than 20.  This could pose problems for an MSU secondary which is thin and has looked utterly clueless in countless instances this season.

Basically, the WMU pass offense isn't spectacular, but it's decent, and it's really the only thing that can keep WMU in the game.  Nonetheless, given MSU's laughable track record against one-dimensional passing offenses this season, there's no guarantee of success on our part.  The Broncos have allowed a fair amount of sacks this season, so we should really put an emphasis on getting to the quarterback and disrupting Hiller's rhythm.  Beyond that, uh, we should cover their receivers?  I think we all understand far too well at this point the areas which need improvement. 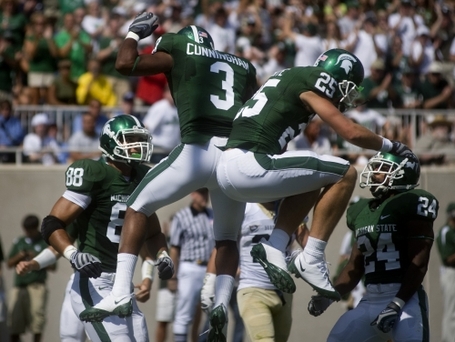 WHEN MICHIGAN STATE IS ON OFFENSE: . . . we should dominate a Western defense which has struggled mightily against the pass.  The Broncos are 13th in the MAC in pass defense (dead last!) and 9th in pass efficiency defense.  They have the second-fewest sacks in the MAC.  At the beginning of the year, Tim Sullivan at mgoblog said this:

If Western's run defense was pretty bad last year, their pass defense was downright terrible. Facing the same motley crew of offenses, they finished #102 in the nation in pass defense. They were a more respectable #62 in pass efficiency defense.) That indicates they were in lots of shootouts last year (a couple) and games in which the opponent was trying to mount a comeback (a couple more).

The Bronco defense soared to those heights despite two players selected in the NFL Draft in Louis Delmas (2nd Round to the Lions, still technically in the NFL) and EJ Biggers (7th Round to the Buccaneers). I think it's safe to say that you can't expect WMU to replace two NFL-caliber players at one position group. Ohio State they are not. The lone returning starter is strong safety Mario Armstrong.

They've been as bad as advertised. And, For what it's worth, WMU's rush defense hasn't been much better: opponents are averaging 176 yards per game, good for 94th in the country.  This also might be a game to see if Baker and Caper can break a few big runs and get some confidence.

This is a very, very short offensive preview for a reason: there's not much to say other than Western is a bad defense, and we should rack up a lot of yards and a lot of points against them.  The fewest points WMU has allowed to a 1-A school this season is 23 (to Indiana, no less); overall, they're averaging more than 27 points allowed per game, good for 80th nationally.  This.  Is.  Not.  A.  Good.  Defense.  And if we don't score at least 30 points . . . we'll (a) have either called off the dogs in a blowout, or (b) have played terribly on offense.I hate the "we can only stop ourselves" cliche, but here, it's true.

FINAL PREDICTION:  I actually really agree with what Graham Couch of the Kalamazoo Gazette said, in an article KJ linked to earlier today:

If Michigan State hadn’t lost to Central Michigan already this year, a WMU win wouldn’t feel so farfetched. But it’s hard to imagine an uninspired effort from the Spartans considering that loss and how much they need this game. That said, the prospect of bowl-eligibility didn’t help Iowa or Illinois get up for the Broncos either of the last two years. Here’s the difference: Both Iowa and Illinois were bad offenses; Michigan State is not.

MSU the better team here, and we desperately need this win to keep ourselves in contention for a bowl berth.  After losing to CMU earlier this year, there's no way we (should!) look past this game.  In 2007, we lost a heartbreaker to Michigan, and then came back to beat Purdue and Penn State to clinch a bowl berth.  This year, the task is substantially easier: beat WMU and Purdue and we're in a bowl.  While last week's debacle clearly shows that this team is capable of losing nearly any game, I really doubt it happens here.  41-21, MSU.

And if it does happen here, I mean, last week's thread of shame is going to look like the post-Michigan discussion by comparison.  Please, football team of my beloved Alma Mater, do not let this happen.