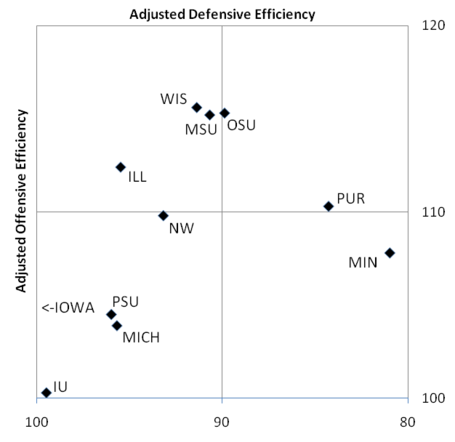 When we went through this exercise last year, it was very difficult to separate the 11 teams into neat groups based on their nonconference performances, presaging a conference season in which 8 of the 11 teams in the league would finish within 3 games of each other.

This year's scatterplot looks more like the one from two years ago, when the teams had separated themselves more against nonconference opposition and the final conference standings ended up with a nearly-sequential win distribution.

Overall, it's been a disappointing nonconference season for the Big Ten.  What looked like nine potential NCAA contenders have already been whittled down to seven, with the over/under on conference bids at 5.5.  Still, at this point teams have only played a dozen games against uneven competition, so there are still more questions than answers.

Here's the newest version of the TOC Big Ten Basketball Power Rankings, with some random observations/musing/questions about each team's statistical performance to date:

1. Purdue: Domination in the turnover department makes sense (10.0 percentage-point difference in offensive/defensive turnover percentage).  Gap in rebounding percentages (7.4) is less expected.  E'Twaun Moore's efficient shooting (.538/.341/.808) makes a big difference on offense, although Purdue still looks like a fairly average offensive team.  Very efficient team performance to date, but none of their wins has come against a KenPom top-25 team (Tennessee is #26).  Final nonconference game--vs. West Virginia on Friday (at home)--offers such an opportunity.

2. Ohio State: Insane numbers for Evan Turner: 116.4 offensive rating on usage rate of 33.4, 28.8 defensive rebounding percentage, 64.5 two-point shooting %.  Team will likely struggle some early in conference play as it awaits Turner's return.  Jon Diebler probably can't maintain a 49.4 three-point shooting %.  Dallas Lauderdale must be dunking a lot; shooting .895 on 2-pointers.  Most balanced team in conference between offense (#21) and defense (#31).  Also most balanced in terms of pace; 5 teams rank in top 108 nationally in adjusted pace; 5 teams rank in bottom 61; Ohio State is at #216 (more on Big Ten pace here).  (Unrelated to anything on the court: Great NYT profile on Mark Titus.)

3. Michigan State: Offense looks competitive in Big Ten (if you ignore issues against top-75 opposition); defense is average.  Six of top seven players by minutes played have an offensive rating of at least 110 (exception: Durrell Summers).  Probably still the #2 contender for the Big Ten title if you account for the Evan Turner injury.  For now I'll give OSU the nod for their wins over Cal and Florida State.

4. Wisconsin: Once again showing up analysts (like me) who ranked them in the bottom half of the league before the season started; I may be underrating them even at #4.  Like last year's Badger team, this team is better on offense than on defense, which doesn't fit the image we all have of Bo Ryan-coached teams.  More consistent with the Ryan image: team is excelling at holding on the ball (Off TO% = 16.1) and limiting opponents to one shot (Opp Off Reb% = 24.7).  Win over Duke gives them a nice buffer for making the tournament.  2-2 in neutral-court/away games.  Team is relying heavily on Trevon Hughes and Jon Leuer to carry the offense; both have usage rates of 27+ with offensive ratings of 110+.  Can they keep it up in conference play?

5. Minnesota: Despite a ho-hum 9-3 record (quality win was vs. Butler, losses to two KenPom top-40 teams and a then-red-hot Portland team), KenPom really likes the Gophers.  They rank #7 in the nation, on the strength of a #2 ranking in adjusted defensive efficiency.  Led by Damian Johnson, the team ranks in the top 10 in both steal percentage and block percentage.  Led by Johnson (59.4 two-point%) and Blake Hoffarber (48.3% three-point%), the team is shooting the ball both inside and outside the 3-point arc..  Biggest area of improvement has been a sizable reduction in turnovers.  Offense may be suffering some due to absences of expected incoming impact players Royce White and Trevor Mbakwe (not rebounding much, fouling too much), but defense is not.  In what looks like a down year for defense in the Big Ten, does the Gopher's defensive disruptiveness make them a major contender?

6. Northwestern: Lost to only KenPom top-50 team on nonconference slate.  Wins against three teams in 50-125 range keep them in the hunt to end their however-many-years-they've-held-the-tournament NCAA Tournament appearance drought (although they may need 10 or 11 Big Ten wins to accomplish that), despite Kevin Coble's season-ending injury.  Could rank them ahead of Gophers, but I'll trust KenPom that the differences in schedule strength and statistical dominance mean Minnesota is the better team.  Adjusted for schedule strength, Wildcats look average on both ends of court.  Dominance in turnover department continues (5.7 percentage points).  Major areas of improvement have been interior scoring (led by John Shurna's .567 two-point%) and forcing tough shots on defense; four players with block percentages of 3.0 or better, holding opponents to 3-point% of .284.  Freshman guard Alex Marcotullio leads nation in steal% at 7.0.  Michael Thompson (.511/.439/.804 shooting line, top 500 in both assist/TO rates) probably isn't the best-kept secret in the country--but maybe in the conference.

7. Illinois: KenPom is kind to them (#52), despite three losses to teams ranked between 125 and 200.  Road win over Clemson (KenPom #6) helps.  And all four of their losses were away from home.  Given that Illinois ranked #4 in the country in adjusted defensive efficiency last season, it's surprising that their problems have been mostly on the defensive side of the ball this season.  (Was Chester Frazier even more integral to Illinois' defensive success than Travis Walton was to MSU's?)  Defensive regression has been across the board in terms of the four factors; they've also been a little unlucky, with opponents shooting a healthy 72.2% from the free throw line.  Freshman D.J. Richardson sporting a lofty 118.0 offensive rating, but probably can't continue to shoot .538 from 3-point range.  Like Northwestern, they may need 10-11 conference wins to get to the Big Dance.  Can they improve enough on defense to get there?  (Also, Saturday's game against Gonzaga in Chicago looks pretty big.)

8. Michigan: Who was the idiot that had these guys as the #4 team in the league going into the season?  In my defense, I don't think anyone could have foreseen Stu Douglass and Zack Novak regressing this much as sophomores (.239/.250 from 3-point range to date).  Of the 9 players who've played significant minutes, 5 have offensive ratings below 95.  Even Manny Harris and DeShawn Sims (who got off to a slow start) can't pull that kind of dead weight up to an average Big Ten level.  Defensively, the team has finally figured out how to create turnovers with the 1-3-1 zone (Def TO% = 24.6) but has regressed further in terms of rebounding and interior defense.  With losses against all four top-100 KenPom teams on their schedule (plus the loss to #181 Utah), making the tournament would seem to be nearly a mathematical impossibility (absent a conference tournament championship).  Ranked ahead of Penn State due to greater potential for improvement in conference play.

9. Penn State: With Jamelle Cornley and Stanley Pringle gone, nonconference opponents have been able to focus their defensive efforts on Talor Battle the way conference opponents did last season.  As a result, his offensive rating has dropped to a mediocre 106.1.  Outside of limiting turnovers, the Lions haven't shown any strengths on offense.  Defensively, they're actually rebounding the ball very well, but they're led by Battle's individual defensive rebounding percentage of 16.5, so that may not hold up in Big Ten play.  Just 2-4 against KenPom top-200 competition.  Thankfully for the Big Ten, one of those two wins was the road win over Virginia to open the Big Ten-ACC Challenge.

10. Indiana: The Hoosiers are doin' some hurryin' this season; only one of their 11 games has contained fewer than 70 possessions (exception: the game against the surprisingly-averaged-paced Kentucky Wildcats).  Let's focus on the positive aspects of IU's four factor profile.  Offensively, Indiana is shooting the 3-pointer well (36.8%) and getting to the free throw line with frequency.  Freshman Maurice Creek has been decidedly unfreshmanlike; he's posted a stellar offensive rating of 128.0 on a usage rate of 24.7; shooting line of .603/.459/.763 with a TO rate of just 13.1.  (Update: Unfortunately, Creek's season came to an end last night, as he fractured his kneecap driving to the basket vs. Bryant University.  Tough break for IU, making their road through the conference schedule that much tougher.)  Defensively, the only strength has been creating turnovers (Def TO% = 23.7%).  A fast-paced team that creates turnovers?  Be wary, Tom Izzo.  A neutral-court win over Pitt is offset by three losses to teams ranked 149th or worse by KenPom.

11. Iowa: Todd Lickliter is the new Dan Monson: A Big Ten coach who would have been better off competing at the national level if he'd stayed at his previous coaching perch on the mid-major level.  After the mass exodus of players from last year's team, this year's Hawkeyes are only good at two things: (1) making 2-pointers (partly because they take very few of them) and (2) defensive rebounding (partly because they never try to run on offense).  On point (2), the team does rank first in entire country in defensive rebounding percentage, which is fairly impressive regardless of strategic preferences; 7 of their 8 regulars have defensive rebounding percentages of 11 or better.  But that just makes their adjusted defensive efficiency ranking of #247 all the more remarkable (in a bad way).  Iowa is winless in 7 attempts against KenPom top-200 opponents.

Despite the conference's underwhelming nonconference performance (outside of winning the Big Ten-ACC Challenge), this still shapes up to be a pretty exciting conference season.  The league has three teams with the talent to get to the Final Four in Indianapolis (Purdue, MSU, OSU), and the bottom of the league is still dangerous.  Manny Harris and Talor Battle give Michigan and Penn State a chance to win every time they take the floor, and Indiana has shown they can keep up with good teams for at least 20-30 minutes.  (As for Iowa, they're the new Indiana--off-the-charts bad.)