A Springtime Tradition Unlike Any Other

Share All sharing options for: A Springtime Tradition Unlike Any Other 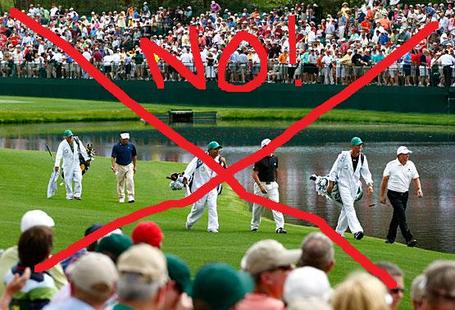 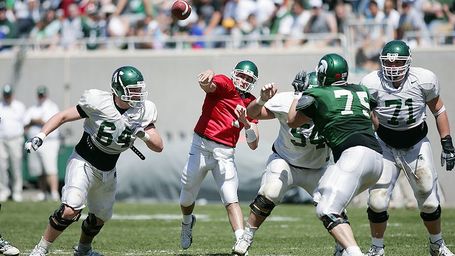 Contrary to this post's title, the spring-game-as-a-big-production is actually a relatively recent phenomenon at MSU.  During the JLS years (shudder), the spring game was often held at Okemos High School and sparsely attended.  The Dantonio administration has brought the Spring game back to campus, and why not?  It's an opportunity for the program to get free publicity, generate enthusiasm, and entertain recruits, a chance for our freshmen to play in the stadium, and most importantly, it's an oasis for us die-hards in the middle of the calendar's football Sahara.  The standard disclaimers apply: it's just a scrimmage, guys may be playing new positions, we can't honestly judge any one player's merits based on his performance in the spring game, blah, blah, blah, whatever.  It's college football in April.  Sign me up.

While the athletic department is busy hyping this Saturday (see: intercept page on the official website), the truth is that it's about as low-key as football gamedays get in E.L.  Tailgating is permitted, and unless you're an uber-RYF donor, you'll get better parking for this game (and seating inside the stadium) than you will anytime in the fall.  Once inside the stadium, seating is wherever you'd like -- and that really is the truth, as attendance has been in the mid-20k range the past two seasons.  The good folks at TOSSS seem to think that the band won't be in attendance, which is unfortunate.    While the previous scrimmages have featured a weird scoring system which awards points to both the offense and defense (and is too complicated for any news source I've found to attempt to explain -- so I have no idea what it is), there'll be a normal scoring system on Saturday.  Unlike last year, the BTN won't be televising the game; so if you want to see it, show up.  Apparently the Spartan Radio Network will be broadcasting the game, but I have a difficult time believing that many affiliates will pick it up.  And anyway, I'd imagine (hope!) that George Blaha will be otherwise occupied on Saturday.

In any event, there's been a higher-than-usual level of intrigue throughout Spring practice.  We have a very talented team which nonetheless needs to replace our quarterback, the most productive running back in recent school history, and our defensive captain (and heart of the team).  The game (and season) looks to be exciting, but in that special, masochistic sort of way that typifies the experience of being an MSU fan. For now, here are a four unresolved position issues/things to watch for heading into the game.  (Note: I know the first three are probably the three most visible positions on the field.  Sadly, it's pretty clear that these really are our biggest uncertainties as of now.) 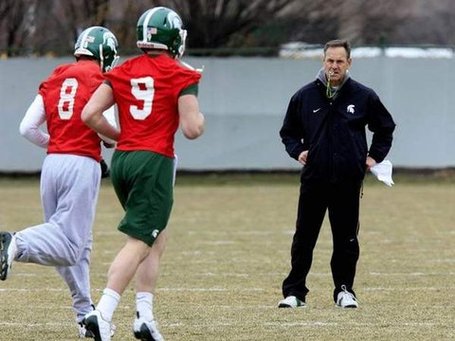 "Ooooh, Mark, you just looked like Dirty Harry just then."

Not very much to write about this situation that hasn't already been written.  In this corner, Kirk Cousins, who performed reasonably well in a fair amount of action last season.  In the other, Keith Nichol, who was expected to be a Spartan directly from high school until Bob Stoops snake oiled him.  Sam Bradford, he ain't, but had he enrolled at MSU originally, he's probably your undisputed starter.  Instead, we stand in a state of limbo, as new, conflicting information seems to come out of the Daugherty building every week.  Depth chart released? OMG IT'S COUSINS.  Dantonio talks about incorporating option packages into the offense?  OMG IT'S NICHOL.  Unfortunately, IMO, It's pretty clear that we won't have any resolution to the situation by the end of spring practice, thus setting us up for a fall of less-talented Stanley Jackson/Joe Germaine-ish goodness

While Dantonio has backpedaled a bit on the option option (heh), I think it might make an appearance in some form on Saturday.  It'll be interesting to see just how proficient Nichol is in non-standard sets; without having the ability to hand the ball off to Javon Ringer approximately 1700 times this fall, we may need to mix it up a bit on offense.  Nichol is certainly down with the idea:

"The quarterback option?" Nichol asked. "I don't know. I hope so. They gave me a QB-run play (in Saturday's controlled scrimmage), and it worked well for about 15 yards before I got hit. I like that creative kind of stuff, and it keeps the defense on their toes.

"I don't know if we'll ever be a spread team, but we have more spread plays in than we did last year."

Eh.  We'll see, I guess.  There's always the chance that one of the two guys will vastly outplay the other -- as what apparently happened in Madison -- but it seems like there's not much separating the two, and it's reasonable to take Dantonio at his word: this decision will go to the wire.

2.  Running back.  Has Ashton Leggett really established himself as the favorite?

All signs point to yes.  Truthfully, I'm a little bit surprised, though there's not much of a record upon which predictions can be based.  Last season was obviously 99% Ringer, and the season before that was 49% Ringer and 49% Jehuu Caulcrick.  So, this is the one position in which we're truly starting from scratch: the three main candidates for the job (Leggett, Andre Anderson, and A.J. Jimmerson) combined for 118 yards rushing last season.  Eesh.  While Leggett isn't quite the bowling ball that Caulcrick was, he is the biggest and most physical of the bunch.  If he is going to be the starter, it'd certainly be nice to have Anderson and/or Jimmerson step up as a viable change-of-pace back.

Edwin Baker and Larry Caper, our relatively-heralded freshmen, seem to have dropped out of the discussion.  My gut says that Dantonio is playing coy with Baker; I think, ultimately, he gets a bunch of playing time, and ends up contributing in a significant-ish way.  If Leggett is the starter, Caper seems a strong redshirt possibility, as they (reputedly) have similar styles. 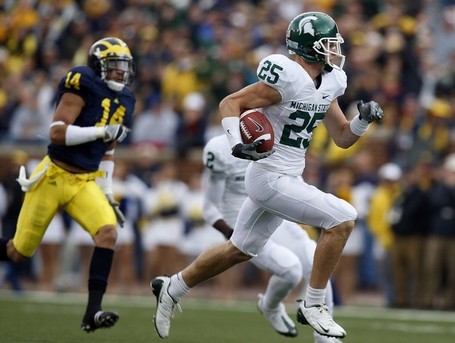 3.  Wide receiver.  Won't the next Devin Thomas please stand up?

I've talked about this a bit over at fellow SBN site The Rivalry, Esq.  In my mind, subpar wide receiver play was the singlemost thing which held our team back from being really good last year, instead of sorta good.  (The issue really deserves its own post, which it will get in due time . . .)  In any event, we need someone to step up this season even more desperately than we did last season, because we obviously won't have Ringer to patch over our passing deficiency.  We need a playmaker.  While it could be Blair White, who is white and wearing white in the picture above, I think it has to be the guy just behind him -- Mark Dell.  Dell was utterly dominant in last season's opener at Cal; then, he kicked his feet up and said, "my work is done here," and proceeded to frustrate the crap out of me, and the coaching staff, for the rest of the season.

Dell has the talent to be a big time receiver, and we really need one this year.  If he plays well on Saturday, huzzah!  If not, be vewy afwaid.  White could pick up some of the slack, and we do have some promising underclassmen, but, IMO, Dell's gotta be the guy.

While we certainly had an offense which was physically dominating at times last season, the defense?  Not so much.  We ranked almost exactly average in rush defense last season: 142.5 yards allowed per game, good for 67th in the country.  Pretty meh, and we lost Brandon Long and Justin Kershaw to graduation.  However, our coaches seem enthusiastic about the replacements:

[D-line coach Ted Gill] has a junior nose tackle (Oren Wilson) who has become another leader, and whose play has improved markedly this spring after two seasons as a starter.

He has two redshirt freshmen (tackle Jerel Worthy and end Tyler Hoover) who will contribute significantly in 2009 and may end up being four-year starters.

He has a raw, sophomore nose tackle (Ishmyl Johnson) who is "probably faster than anybody we've got up there," Gill said, and who reminds Gill of a surprise he encountered two years ago - end Jonal Saint-Dic.

. . . and several other promising D-line possibilities.  Rexrode's article is worth a read, as is Mike Trogan's follow-up piece.  The only sure things on the line seem to be Oren Wilson, and, of course, Trevor Anderson, who (after a slow start) settled in nicely to be one of the better defensive ends in the conference.

The defensive line is so important for us because they're the identifiable weak link in what's otherwise an excellent defense.  (When was the last time our secondary wasn't?)  All-conference performer and LVS mancrush Greg Jones will obviously lead the linebackers, and while our secondary will miss Otis Wiley, we return everyone else from a unit which made incredible strides last year.

Most would consider our offensive line to be stronger on paper than the D-line coming into this season; if, during the spring game, the defensive line wins a fair amount of the battles, that's a good thing.