The MSU Spring Game in Photos

Share All sharing options for: The MSU Spring Game in Photos

G0EL will have a more thorough first-hand account of the football action from today's game up some time tomorrow.  For now, here are a few photos I took today (and just a pinch of football analysis) to give you a flavor of the scene at Spartan Stadium today. 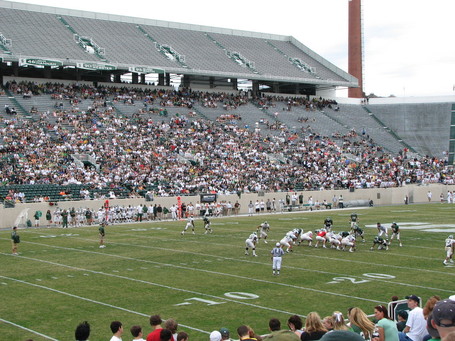 It looked to me like attendance was in the 20,000-25,000 range.  The weather forecast probably kept some people away.  The group I attended the game with got caught in a massive downpour walking to the stadium.  But conditions were dry for nearly all of the game, with just a few sprinkles at the end of the OT period. 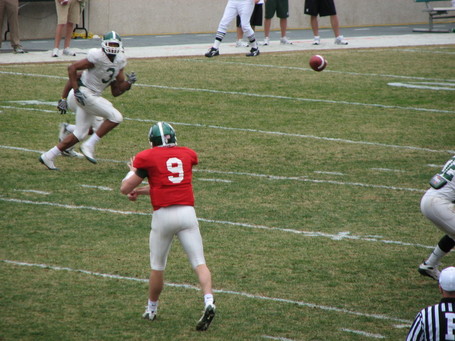 Keith Nichol tries to connect with B.J. Cunningham on a slant.  The play of the game, in my view, was the 32-yard TD pass Nichol threw to Cunningham at the beginning of the 4th quarter.  Nichol was rolling out to his left, but still had the arm strength to throw the ball on a line to Cunningham on the sideline in the end zone.  (Video highlights from the game are here, although you don't get a good view of the complete play on that paricular throw.) 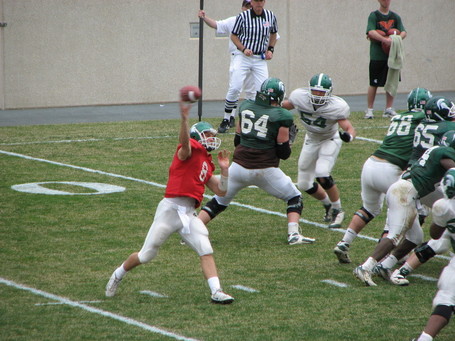 Nichol's competition for the starting QB job.  Kirk Cousins played a great game, as well.  His gets the ball out quickly, accurately, and with some zip on the ball. 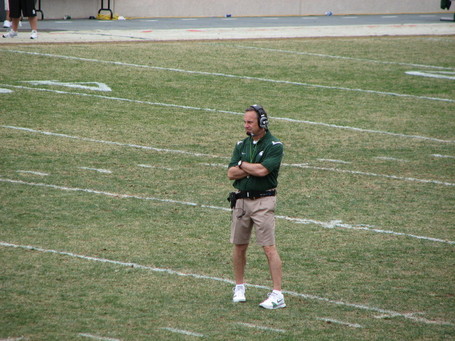 The coach takes in the action. 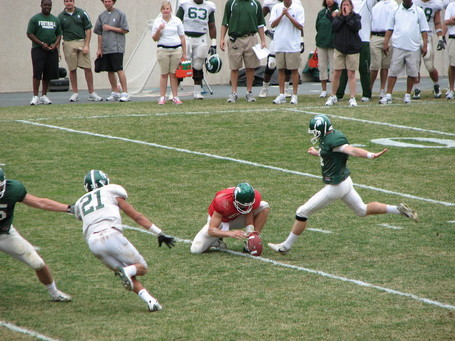 The back-up kicker, Old Whatshisface, converts a field goal for the Green Team. 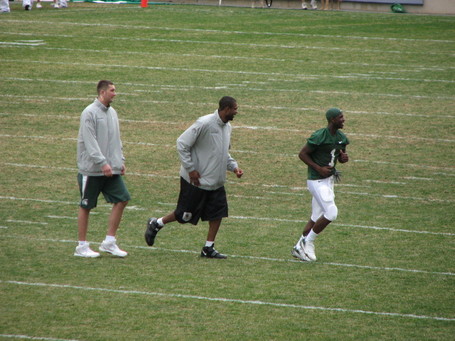 Travis Walton dressed in full pads and took the field on the first play of the game, lined up at wideout.  They blew things dead before the ball was snapped, though.  In this photo, he's coming off the field after the coin flip before OT.  (Who's the guy between him and Suton?  I thought it was Ibok, but he looks too short.)

The transition between basketball and football was a nice aspect of the game.  The basketball seniors and assistant coaches served as honorary captains for the two teams.  And they played a montage of MSU highlights from the NCAA Tournament--set to "One Shining Moment," of course--before the game started. 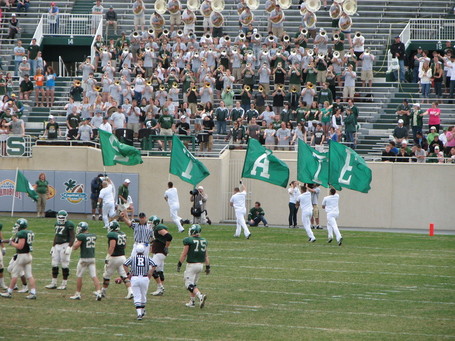 The band (or some subset of the band, at least) was in attendance, which made the atmosphere seem a bit more like a real game.  It was a fun afternoon, enhanced by the fact we had a close game at the end.  The players were clearly playing to win, with both QBs showing a lot of emotion when their respective teams scored.  I spotted Greg Jones getting the Green Team charged up on the sidelines in the fourth quarter.

My major takeaway from the game, as hinted at above, is the athletic ability of Keith Nichol.  He has all-conference-level arm strength.  And he showed real speed on sprint-outs (an asset that doesn't show up in the box score because the refs blew the play dead as soon as the QB started running downfield).  I think he's a little behind Cousins in terms of consistency, particularly on short throws, but to me there's every reason to think he's going to emerge as the guy to lead the offense at some point this season.