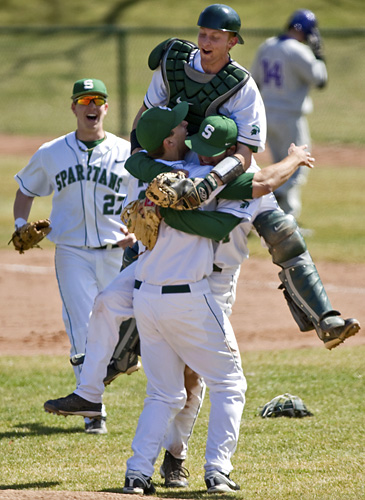 In case, for some strange reason, you were busy watching the Tigers win their sixth game in a row (w00t), no need to be remorseful that you missed the MSU baseball game. The team's season ended today with a 12-9 loss to the Purdue Boilermakers in the Big Ten Tournament.

Still, this season's takeaway is encouraging: our first appearance in the conference tournament since 2004, a memorable no-hitter, the opening of the gorgeous new McLane Stadium, a series win against Michigan for the first time in ages, along with sweeps of Penn State, Iowa, and a win over the Lugnuts. The final record is 23-31, doomed to undy-five-hundy status by a 2-14 start, but Jake Boss's first season as manager has to be considered a success.