Welcome Aboard, Will Gholston

Share All sharing options for: Welcome Aboard, Will Gholston 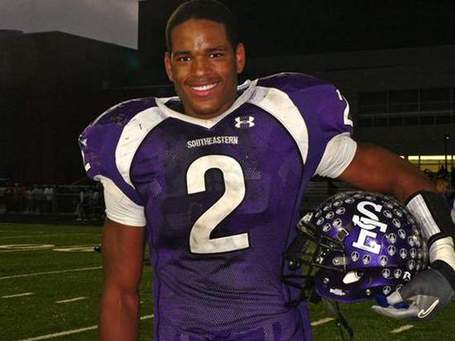 Aside: purple and white uniforms, but "SE" on the helmet.  It's bizarro Northwestern.

The most speculated about, agonized about, dissected, stalked, and coveted recruit in the state of Michigan officially will wear Green and White (again), as Will Gholston committed to MSU late last night.  It's difficult to overstate the importance of this news with regard to impact both on-the-field and off-the-field.  He's certainly the biggest recruiting coup for MSU since Drew Stanton--and probably since Charles Rogers--and the kind of player we can build our defense around.  It's a shame that Gholston's signing is overshadowing the commitment of Mylan Hicks, because that's an excellent news as well, but it's easy to understand why: Gholston has the makings of a superstar.

Let's go in-depth, after the jump.

Other offers: Really, you don't need to go any farther than this understand how big of a deal Gholston's signing truly is.  MSU beat out the who's-who of college football to land Gholston: he was offered by Oklahoma, USC, Tennessee, Alabama, Florida, Florida State, LSU, and Miami, in addition to Ohio State, Michigan, Wisconsin, Illinois, and Purdue.  He literally could have played anywhere in the country.

So, yeah.  He's ranked a little too low to receive the coveted fifth star, and given that he's now committed to an unsexy school, it's probably not forthcoming.  Tom Lemming, on the other hand, has Gholston rated as the #12 prospect in the country.

Gholston is a physically impressive prospect. He is a tall kid with solid bulk and really stands out on the football field from an appearance standpoint. He possesses the frame to also keep packing on good bulk . . . While we could see him being allowed to play some from a two-point and used in certain situations like a linebacker, the truly best fit for him is at defensive end. He has an ideal frame and with his reach and athletic ability could be a very good player at the end position in college . . . He could be a handful as a pass rusher and this is where we could see him being allowed to stand-up some and rush from a two-point. As he develops pass rush moves and learns to fully utilize his reach he could be tough to stop.

ESPN's negatives, roughly, are threefold: first, that he might play basketball (if anything, attending MSU might lower the chance of that happening); second, that he's primarily played linebacker in high school and will probably have to adjust to defensive end in college; and third, some potential fundamentals issues:

Can have a bit of a methodical style to his play, but has a good motor and gets around the football. He is a solid tackler, though he can get a little sloppy at times when he tries to arm tackle.  Though at times with his reach he can reel in and make some tough tackles many others could probably not.

So there's probably a bit of work for the coaching staff, both in the weight room, and on the field.

"With his frame, I don't know if he is going to be able to stay at 250 pounds once he gets into a college weight program," English said. "But maybe he can. I think he probably will get up to around 280. He reminds me a lot of Jason Taylor long term."

Ultimately, Gholston brings outstanding athleticism.  His FAKE! 40 time (the veracity of which I have no idea) is in the "4.6-4.7 range," which is quite good for a player of his size.  He'll certainly be one of the tallest defensive linemen anywhere; if he can add some bulk, his natural speed and agility will make him extraordinarily difficult to contain:

With his size potential and ability to run, he could be a very tough defender from the end spot. He uses his hands and long reach to take on blockers, and can be a tough player to block versus the run or pass. His athleticism could also give the Spartans some versatility to move him from end to linebacker at times to get favorable matchups, especially as a pass-rusher.

And this isn't really an evaluation, but here's Steve Grinczel, getting even more hyperbolic than I am:

The first player to pop into my mind when studying Gholston, who is universally regarded as Michigan's top prospect going into the 2009 season, was [George] Webster, who just happens to be considered the greatest Spartan of all time.

High school statistics: As a junior, "over 100 tackles, including 22 for loss and 15 sacks."  IMO, the number of sacks seems especially impressive given that he has spent most of his time at linebacker.

The takeaway: It should be noted that MSU had numerous advantages in recruiting Gholston: he attends an MSU-friendly high school, grew up an MSU fan, etc.  Still, choosing State over the other schools on his quite-illustrious offer list will certainly turn some heads.  Mike from Black Shoe Diaries noted (accurately, IMO) here yesterday that while we're a program on the rise, we're decidedly in the second tier at the moment, and our recruiting expectations must be adjusted accordingly; well, here's a player who could have gone anywhere, and decided to come to East Lansing.

Craig Haubert on ESPN.com thinks that Gholston's commitment may lead to a "domino effect of bringing in other top prospects."  MSU is competitive for several other highly-rated players who may announce their decisions soon, including Orchard Lake St. Mary QB Robert Bolden, and Warren Mott LB/DE C.J. Olaniyan.  If Gholston's signing somehow improves MSU's standing for these two and others, fantastic.  Most importantly, Mark Dantonio is known as a defensive coach, and Gholston is the first big-time defensive recruit he's brought to MSU.  Awful defense has been the downfall of so many MSU teams since, well, forever ago.  Obviously, we're making strides in this regard, and our defense certainly looks to be the stronger unit this upcoming season, but Gholston's signing will certainly make all of us feel a little better about the previously-ominous post-Greg Jones and Trevor Anderson days.

Huge kudos to Dan Enos and Pat Narduzzi for keeping MSU in front even when Gholston was rumored to be wavering.  Plainly: this is Mark Dantonio's biggest and most important signing as the head coach here.  I can't wait to see Will in Green and White.

Photo credit: Detroit Free Press.  Additionally, this is the first time I've done a post of this type, and I borrowed heavily from the mgoblog format.  I promise this will be the last Gholston post for a while.  Seriously.