Share All sharing options for: Welcome Aboard, Joe Boisture 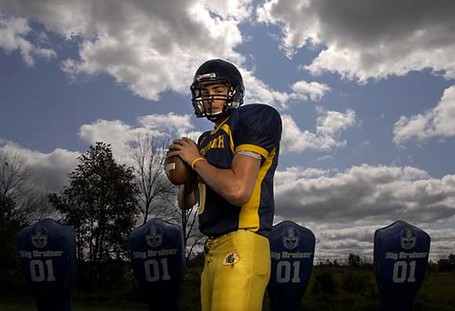 Spartan fans have been expecting news of a quarterback commitment for about a week now . . . but few were expecting it to be this.  Saline (and former Goodrich) QB Joe Boisture has signed on to play in Green and White, and he's a good one: one of the big three senior QBs in Michigan (along with U-M commit Devin Gardner, and Robert Bolden, who you'd have to imagine will head to Penn State now), and clearly one of the top signal-callers in the Midwest.  The circumstances behind Boisture's commitment are odd, and I don't think we can see this as part of any domino effect Gholston's commitment supposedly set in motion.  Nonetheless, what a difference 10 days makes: on June 15, I was fretting about our lack of commitments.  Four big signings later, the humble pie couldn't be tastier.

Let's go in-depth, after the jump.

First things first: it seems that Rich Rodriguez no may no longer be the only snake oil salesman in Michigan.  Boisture committed to Boston College back in March, and, uh, seemed pretty final about it at the time:

"Once I'm committed, I'm committed and I'm going to be loyal to that place," he said. "There's just always been something about Boston College. It was always in the back of my mind and I felt it was the right time to pull the trigger."

Before people bash Dantonio, it has been reported that the Boisture family contacted MSU about possibly changing over.

Eh, whatever.  Regardless of who called who first, the entire OMGSNAKEOIL argument got a big meh from me last year when Rodriguez sniped Roy Roundtree from Purdue, and it still gets a big meh today.  It's part of college football, and as long as kids are giving verbal commitments months in advance of formal signing day, it'll stay that way.  Boisture feels more comfortable at MSU, and that's great.  Had it been the other way around, c'est la vie.  Excellent BC blogger Eagle in Atlanta has a similar take on the situation, although his commenters are not nearly as forgiving.  Essentially, I believe those who claim that Boisture contacted Dantonio first, but I don't think it's a big deal either way.

In any event, I'm sure that the coaching staff will keep an eye on him.  He's decommitted once already; having it happen again certainly doesn't seem out of the realm of possibility.

Anyway, onto the actual player:

Other offers. A respectable, if not overwhelming list: Pitt, UCLA, Wisconsin, Central, Cincinnati, Kansas State, and, of course, Boston College.  Not surprising that most of these schools (including MSU) run a pro-style offense, as that's the kind of system Boisture can thrive in.

Shows good pocket presence, possesses adequate athletic ability and instinctively sidesteps the rush while keeping his eyes downfield in order to find the open receiver. He is not a scrambler or improviser by any means, but he has a nice feel for the rush and he actually squares his shoulders when he gets on the move and throws well on the run mostly due to his arm strength.

His ability to throw on the run is quite apparent in his highlight video:

That is one hideous offensive line he's playing behind.  But, yeah, it seems as if he's rolling out on nearly every play: the kind of stuff you can get away with in video games, but not so much in real life.  At least it looks as if they're all designed plays, and he doesn't simply have happy feet.  That's good, because while he's certainly mobile, Pat White he ain't.

Four other things stick out from the video: 1: He clearly has a strong arm, but he sometimes seems to underthrow his receivers.  TD pass at 2:50 is gorgeous, however.  2: He seems to be most comfortable working from the shotgun.  3: He's really tall.  4: He's really skinny.  Speaking as someone who's also 6'6", but is more like 325 pounds (guh), I can see that some time in the weightroom--and perhaps the cafeteria--will help.

Stats: Rivals says 1,700 yards passing and 15 touchdowns during his Junior season.  It should be noted that he wasn't necessarily playing the greatest competition in the world at Goodrich; it should improve at Saline.  Boisture missed nearly all of his sophomore season with an injury to his non-throwing elbow which has, presumably, totally healed.

The Takeaway: I'm honestly surprised to be writing about Boisture and not Bolden.  There seems to be some disagreement as to who we'd have been better off nabbing: Rivals seems to be higher on Bolden, but Boisture certainly comes with significant accolades of his own: he was the 2010 Class MVP at the Purdue Quarterback Camp last year, participated, as a junior, in the Elite 11 camp, and won co-MVP honors at the Colorado Nike camp last weekend.  Essentially, take your pick.  It does appear from the video above that Boisture will be a fine fit into our offense.  Since Bolden seemed to be leaning away from MSU over the past few days, receiving a commitment from Boisture is great news, indeed.  And, happily enough, he's also something of an MSU legacy, as his grandfather was an assistant coach under Duffy Daugherty.

This should end quarterback recruiting for MSU for this the 2010 class, as we're already well-stocked at the position with Kirk Cousins, Keith Nichol, and Andrew Maxwell.  (All four, including Boisture, from the State of Michigan, interestingly enough.)  Boisture seems a sure bet for a redshirt year, and then should challenge Maxwell for the starting job.

Another excellent recruiting coup for Dan Enos.  Now let's go get some freakin' linemen, shall we?