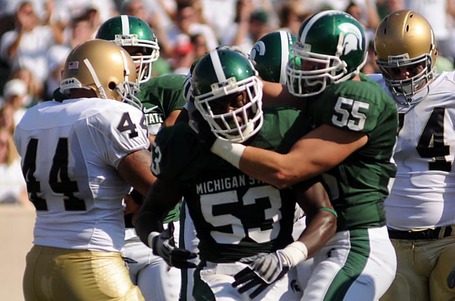 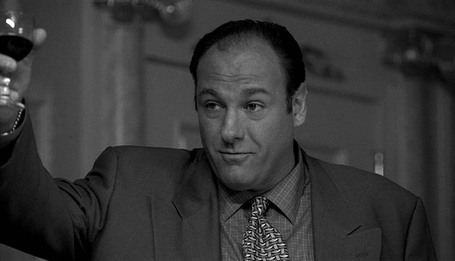 Greg Jones's days of flying under the (inter)national radar are officially over. He's now the most highly-touted defensive player we've had since Julian Peterson -- if he follows that template, we're in good shape, indeed -- and the face of our team.  But, as LeVar Burton would say, you don't have to take my word for it: 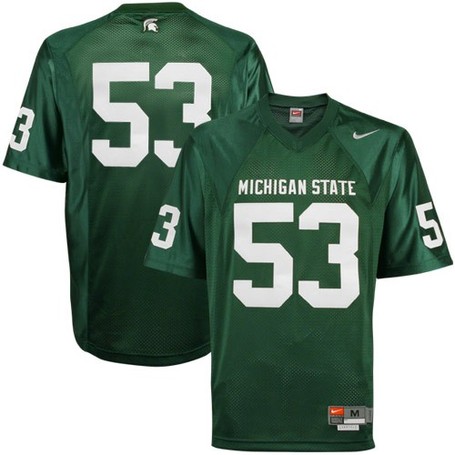 Greg Jones wasn't a prized recruit.  Rivals rated him as the 34th best outside linebacker in the country; aside from MSU, he had offers from Marshall, Miami (OH), Western Michigan, Air Force, Cincinnati, and Minnesota.  (As The Daily Gopher remembers wistfully, had Glen Mason not been fired, Jones would likely be starring in maroon and gold.)

When was the last time a MSU defensive player (or any player, for that matter) went from such obscurity to stardom?  Jonal St. Dic sort of qualifies, though he was only around for one year.  Before him, I'm stumped.  The point is this: isn't Greg Jones exactly the reason why we hired Mark Dantonio?  For years and years, we saw MSU teams with adequate-to-good offenses become completely undone by our underachieving, poor-to-LOLOLOL defenses.  Our recruiting is improving, and that's great, but realistically, we're not usually going to snag the athletes that Ohio State and even Michigan often do.  What we need to do, and what we so clearly haven't done in the past, is maximize what talent we have on the roster.  Through some combination of astute talent evaluation and effective coaching, we're beginning to do that now.  The development of players like J'Michael Deane,  Trenton Robinson, Antonio Jeremiah, and others will reveal whether Jones is a phenomenal stroke of luck or evidence of a real sea change in our program.

Dantonio said this during his presser:

The sports writers picked us third this year. I think it's very, very important to recognize that we've been in this situation before at times where the Spartans have sort of raised up a little bit, created very high expectations and fell a little bit flat.

Very true, and I appreciate that he's willing to confront the our ugly semi-recent history head-on.  (Easier to do, of course, when he wasn't involved in it.)  Well, the expectations are back again, both for our team and for Jones himself.  In the run-up to both 2002 and 2006, I thought we had a decent team, but in my heart suspected that we were more smoke and mirrors (or fire, ugh) than substance.  The transformation of Greg Jones from a lightly-recruited afterthought to the preseason DPOY makes me believe that this time is different.  We almost certainly don't have the bodies to win the league this year, but the effort, focus, and belief will be there.  That I no longer have to suspend my own disbelief when our head coach states something like, "I firmly believe that in the next four years, that group of players will see a Big Ten championship," surely means that major progress is being made.

So congratulations, Greg.  Now let's prove on the field that this isn't the Same Old Sparty.  Because, truly, I don't think we are.