Share All sharing options for: Non-Context-Associated Statistics From an Artificial Competitive Environment! 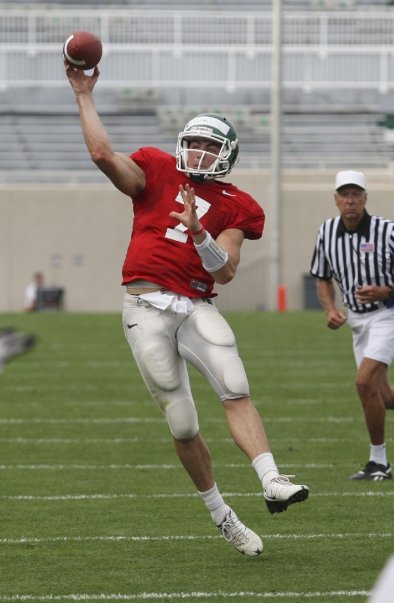 Add one data point to the NICHOL side of the Great Spartan Quarterback Battle of 2009 Scale:

The low completion percentage (43.3%) is surprising for Cousins, given that accuracy is supposed to be his strong point (74.4% completion percentage is his limited playing time last season).  The media wasn't allowed to watch the scrimmage, so we don't have much in the way of context from what was termed a "situational" scrimmage.  Here's the coachspeak context:

"I don't think you can read anything into those things," Dantonio said about the comparative statistics of the two quarterbacks. "We had couple drops, and we were throwing to all receivers. They're working with the ones (first-string) and working with the twos, and that type of thing.

"We were sending different pressures at them and they're active. They've got to throw hot in certain situations and so you ask yourself, `Did they make good decisions?' And for the most part I think they did."

Still, this is the first shred of real information we have on the quarterback battle since the Spring Game (which was a dead heat statistically), and you have to think it creates a slight edge for Nichol.  If Cousins doesn't outperform Nichol statistically, it's hard for me to see Dantonio not going with the guy with more upside (read: athletic ability), given the three-year window he's looking at to compete for a Big Ten championship with whoever emerges as the starter.  Plenty more data points to come over the next 2-5 weeks, though.

In terms of the other big skill position battle, Ashton Leggett was the statistical leader among the running backs, gaining 93 yards on 10 carries.  (No stats were reported for Baker/Caper; apparently there was a separate freshmen-only scrimmage yesterday.)  But 63 of those yards came on one run.  Subtracting that run, the overall results for the running game aren't very encouraging: 100 yards on 35 carries.  That's just 2.86 yards per carry.  That figure could, of course, be just as much a function of bad run blocking and/or good run defense as it is of poor running back play.

All statistical results from intrasquad football scrimmages can be characterized in one of only two ways:

The statistics indicate option 2 was the case today by a small margin (although the offense did win 73-61 using whatever jury rigged scoring system the coaches came up with), with Nichol's stats being the main bright spot on offense.

There you have it: All the news that's (barely) fit to print.