Share All sharing options for: Welcome Aboard, Mike Sadler: Class of 2010 Commitment #12 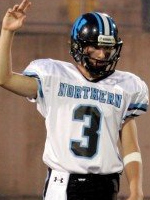 As Stuka first posted, we've got a punter:

Punter with a 4.0 GPA and a 32 ACT. Welcome to Michigan State! Another great get in-state for Dantonio...

He's a good one, and a lefty!  The Forest Hills Northern senior is rated as one of the top punters in the country, and has a correspondingly excellent offer list.  With our incumbent punter entering his junior year, it was important for us to sign a punter this year to be Aaron Bates's heir apparent.  Details and a video (!) after the jump.

This commitment wasn't exactly a surprise: in Friday's Free Press, Matt Dorsey predicted that Sadler's committment would be forthcoming.  By all accounts, this is a good pickup: Scout and Rivals both rate Sadler as a 3-star recruit, which is quite good for a punter.  Scout lists him as the #2 punting recruit in the country, while Rivals rates him as the 6th best.  Furthermore, his impressive offer list reveals all you need to know about Sadler's potential: aside from MSU, he's drawn offers from Air Force, Alabama, Arizona State, Florida, LSU, Michigan, Northwestern, and Purdue.  [Edited; my fault.  --LVS]

While scouting reports on punters are somewhat few and far between, the ones which are available are ($) overwhelmingly ($) positive ($).  From ESPN (non-$!):

It's easy to see why many coaches and kicking gurus think senior Mike Sadler (Grand Rapids, Mich./Forest Hills Northern) is the best left-footed punter in the country. The football absolutely exploded off his foot from the off set. He tallied punts of 61, 56 and 55 yards with 4.74, 4.80 and 4.87 seconds of hang time respectively. Sadler has already drawn offers from schools such as Michigan State, Purdue, Northwestern, LSU and Arizona State. Sadler has been attending Kohl Camps for four years and it's the third time he has been invited to the national competition.

There is this semi-cautionary note, however:

Two other top punters in attendance were left-footed kickers. One was Mike Sadler (Grand Rapids, Mich./Forest Hills Northern) who displayed a very strong leg and the ability to get impressive hang time. Disappointingly, he was knocked out in the first round of the punt competition after shanking two punts, and he needs more consistency in his kicks. Still, he flashed one of the strongest legs. That ability is why several schools have already offered, including in-state Michigan State, LSU, and Arizona State, Sadler said.

But, judge for yourself:

Happily enough, Sadler appears to be outstanding off-the-field, as well:

Sadler is a 4.0 student and already scored 32 on his ACT exam. He plans to major in engineering in college.

In recent years, we've been spoiled by Brandon Fields and Aaron Bates; Sadler appears set to continue the tradition of excellent punters at State.

It's widely assumed that the coaching staff hoped to sign approximately 20 players for the class of 2010, and we're now more than halfway there.  I'd expect the staff to start concentrating on the offensive side of the ball (WR and OL in particular), though some of our most important recruiting targets remain on defense.