Share All sharing options for: A premature (but not excessively premature) 2009-2010 Big Ten conference basketball preview

OR "How did I let all this football talk distract me from producing basketball scatter plots?"

Now that I've thrown my blogging lot in with a couple football nuts, my old "basketball's WAY better than football, even in August" shtick probably doesn't work as well.  Nevertheless, I feel compelled to point out that we're now more than halfway through the long, cold college basketball offseason.  It's been 121 days since our Spartans were vanquished in the national championship game, and there are fewer than 100 days left until the basketball team suits up for the first exhibition game this November.

It's about time, then, to take a look at the lay of the land in the Big Ten for the 2009-10 basketball season.  And what better way to survey any basketball landscape than with a scatter plot?  Details and Excel-generated goodness after the jump.

Broadly speaking, any college basketball team's prospects for an upcoming basketball season are a function of three things:

The first two factors are more easily quantifiable than the third.  Scatter plot: 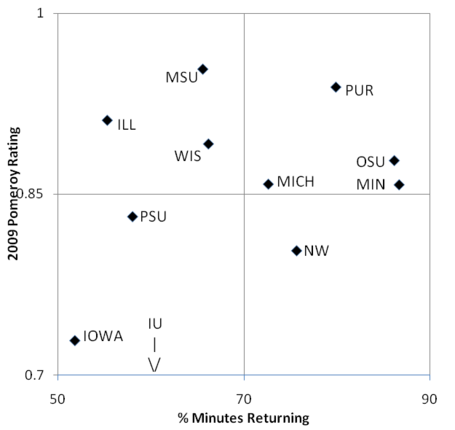 The horizontal axis shows the percentage of a team's minutes played during the 2008-09 season by players who are returning for the 2009-10 season.  (Notes: (1) I used Kenpom data, so players who played a minimal number of minutes last season aren't included. (2) Here's the list of nonseniors who aren't returning for next season: Jordan (ILL), Mullens (OSU), Grady (MICH), Busch/Payton (MIN), Davis/Kelly/Palmer/Peterson (IOWA), Story/Williams (IU).  Transfer list is here.)

The vertical axis shows the team's Kenpom rating from last season.  That rating is a function of a team's offensive and defensive efficiency, adjusted for schedule strength.

(Note: I'm stealing this concept from the Big Ten Geeks.  But that's what the Geeks get for not posting during the offseason.)

Dividing the scatter plot into four quadrants, you get the team groupings below.  I've included a key question for each team.

*Apologies to the NIT Champion Nittany Lions for including them with the other two teams in this category; I had to let the non-IU vertical axis midpoint fall where it may.

Accounting for the third factor, incoming players, is a fairly speculative exercise.  Based on what we know about the conference's incoming recruits at this point, it looks like Minnesota, Indiana, and Illinois can expect the biggest contributions right off the bat, with Michigan adding a potential key piece in point guard Darius Morris.

(There's a fourth factor I've skipped over--how much your returning players who didn't play much last season improve during the offseason.  But that's even harder to predict than the impact of the incoming recruits.)

Anyway, put all that together and you get the following three-months-out TOC Big Ten basketball power rankings:

With two potential national title contenders and up to nine teams with NCAA Tournament hopes, the conference looks to be as strong as it's been at least since the 2004-05 season (when two Big Ten teams advanced to the Final Four) and maybe as far back as the 1999-2000 season (when the conference last sent seven teams to the Big Dance).

There you go, fellow hoop heads.  Hopefully, that helps tide you over for the next three months.  And, you know, I have to say, delving back into the basketball stats like this has reminded me of something: Basketball's WAY better than football, even in August.