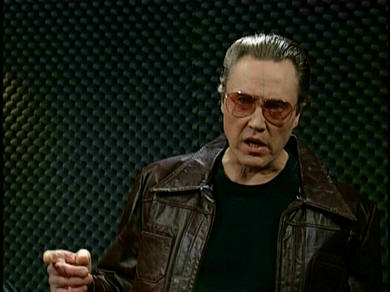 After emerging victorious in the epic MSU-squared battle, your Spartans welcome Central Michigan to East Lansing.  While not so long ago I fretted somewhat about this game, things may be looking up in light of MSU's good performance last week and CMU's the-score-doesn't-tell-the-whole-story 19-6 defeat by Arizona.  In Tempe, the Chips were outgained 448-182, and the final score would have been much worse had it not been for Arizona's shaky red zone offense.  CMU has now lost four straight games dating back to last season, including a 56-52 loss to a 3-9 EMU team, and a Motor City Pizza Pizza Bowl defeat at the hands of Florida Atlantic.  The foregoing is my roundabout way of saying this: even though CMU has some talented players, and will undoubtedly be fired up (pun!) to play an in-state Big Ten team, we're better than they are, and we're going to win on Saturday.

More after the jump. 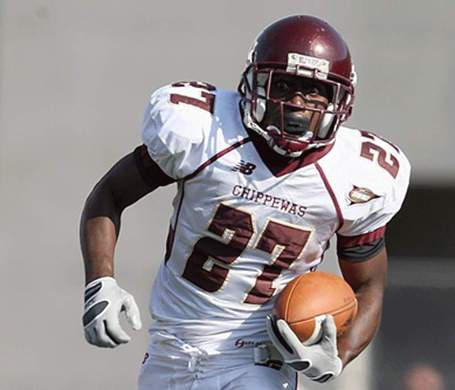 CMU's Antonio "Nighmare Fuel Eyes" Brown.  Photo credit: The Detroit News.
WHEN MICHIGAN STATE IS ON DEFENSE: Plenty has already been written about CMU's senior quarterback, Dan LeFevour, and much of it is justified: he's an electrifying player and probably the MAC's biggest star since Ben Roethlisberger.  He begain the season ranked 14th in total offense in the history of college football; as a sophomore, he became the second player in NCAA history to throw for 3,000 yards and rush for 1,000 yards in a season.  (The other?  Vince Young.)  He's obviously our biggest concern, as last season our defense struggled mightily against scrambling quarterbacks.  However, LeFevour is coming off of a miserable day both running and passing: against Arizona, he managed to go only 18-31 for 108 yards passing (which works out to an utterly putrid 3.5 yards/attempt), while running for only 18 yards on 9 carries.

LeFevour's past success clearly has something to do with the receivers at his disposal: Bryan Anderson and Antonio Brown were both first-team All-MAC selections last season.  They're good, and wouldn't you know, they'd be the first to tell you:

"We're the No. 1 tandem for outside-inside receivers in college football," said Brown, who's from Miami, Fla.

Last season, Anderson had 63 receptions for 865 yards, while the 5'10" Brown had 93 catches for 998 yards.  However, MLive CMU blog Fire Up Chips states plainly that both players were "invisible" against Arizona.  (This partially has to do with the fact that Brown was suspended for the first portion of the game.)

However, CMU's larger problem is that they appear to be a completely one-dimensional offensive team; their running game (aside from LeFevour, perhaps) should scare nobody.  CMU lost 4-year starter Ontario Sneed to graduation, and appears to have replaced him with, uh, nobody: against Arizona, the Chips rushed for only 74 yards on 20 carries, and only 25 of those yards came from their running backs.  It should also be no surprise that the offensive line is part of the problem: CMU has 4 new OL starters this season.  Says Fire Up Chips about the Arizona game:

The offensive line play can best be summed up by a misdirection play where Rocky Weaver was supposed to cut-block his man.  Instead the defensive end leapt over Weaver easily, making a tackle in the backfield on the ball carrier.

Allen Ollenberger (Senior) was selected to be a captain before the start of the game, but struggled more than the inexperienced tackles, giving up a brutal sack on Dan LeFevour and jumping off sides twice in the game.

While Fire Up Chips (no blog abbreviation; this is a family site, after all) also says that overall, he thinks the line played "pretty well," I think the stats don't lie: Arizona sacked one of the most mobile quarterbacks in the country twice, and Central had absolutely no running game.  Our defensive line should be salivating.

Given the one-dimensional nature of CMU's offense, we should be able to dedicate a linebacker to spying LeFevour in many situations, and run some nickel sets to protect against the pass.  While CMU wasn't able to complete deep throws against Arizona, their wide receivers have big-play capability; while we may give up a big one, I'll bet that our secondary is up to the challenge.  Jeremy Ware and Ross Weaver were, by in large, excellent against Montana State; look for them, along with the safeties, to have big games against CMU.

If, even with the linebackers concentrating on LeFevour and the passing game, our defensive line is still able to win the battles up front, cackle with knowing glee and so forth. 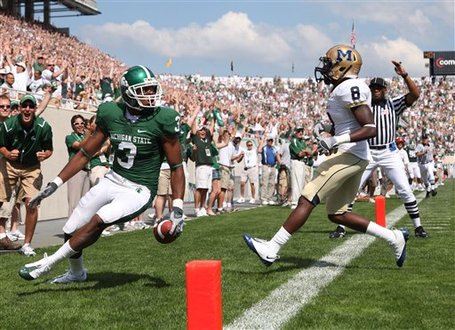 WHEN MICHIGAN STATE IS ON OFFENSE: Surprisingly enough, CMU's defense was clearly the strength of the team against Arizona, though their relative success was definitely of the "bend, don't break" variety: Arizona had 448 total yards against the Chip defense, including 246 rushing.  CMU returned its top 12 tacklers from 2008; this is a veteran defense which is probably substantially better than the outfit which allowed more than 30 points per game in 2008.  The strengths are clearly on the line and at linebacker.

The player to watch is outside linebacker Nick Bellore; he led the Chips with 148 tackles last season, and had 10 last week (including 2 TFLs).  Of Bellore's performance last week, Fire Up Chips says he's "never been better."  Joining Bellore at linebacker are the similarly experienced Matt Berning and Tim Brazzel.  While the three may be useful against the run, the biggest of the three is Bellore at 6'1"; I'd expect all of them to be severely mismatched when attempting to cover Messrs. Gantt, Linthicum, and Sims.

CMU boasts two excellent defensive ends in Frank Zombo and Larry Knight.  The two players combined for 15.5 sacks last season.  John Williams and Sean Murnane work the middle of the line; Murnane was a third-team all-MAC selection last year, and Williams was supposedly excellent against Arizona.  Again, however, the stats tend to belie this: Arizona rushed for 246 yards last week, and CMU recorded only one sack.  Our offensive line had some difficulties in run blocking last week, but was generally very good against he pass rush; even if Nitchman is still out, our line seems to be the stronger unit.

The Chips may have upgraded the most in their secondary, though after last year, almost literally the only place they could go was up: the pass defense ranked 118th out of 119 1-A teams in 2008.  Josh Gordy and Kirkston Edwards are the corners, while Eric Fraser and Bobby Seay -- whom I assume does not moonlight in the bullpen for the Tigers -- are the safeties.  Seay in particular was strong in 2008, recording 90 tackles.  Fire Up Chips says that the secondary performance last week was one of the best since the early 90s.  However, Arizona was breaking in a new quarterback, and one who was far less heralded than either Cousins or Nichol.  Look for MSU to have a big day passing the ball, whether or not Mark Dell is playing.  Additionally, as discussed above, I'd expect that our tight ends are going to pose a big problem for CMU's undersized linebackers and secondary.  If they can play at the level they did last week, CMU will have to spread out its already-thin secondary even further, and divert linebackers from focusing on the run.

FINAL PREDICTION: As I said before, at one point I was quite concerned about this game.  But if you look deeper, I think that the hype surrounding CMU is really just an extension of the (mostly deserved) LeFevour plaudits.  Unfortunately for CMU one player does not a team make, especially when it's a MAC team going up against an upper-echelon Big Ten opponent.  It is a reasonable possibility that LeFevour, Anderson and Brown absolutely go off and CMU scores a boatload of points.  Still, the rest of this Chips team really doesn't scare me at all.  I think they'd have to score at least 40 points to beat us, and I can't see that happening.  Finally, every time CMU has played a big game over the past few years, many have predicted the upset, and it never happens.  In the past four seasons, CMU has played ten games against power-conference teams, and is 2-8 in those games.  (The two victories came against Temple in 2006, when they were still a member of the Big East, and against an awful Indiana team last season.  So, we can fairly excise those two games and say that CMU is 0-8 against even marginally decent BCS-conference teams in the past four years.)  This game won't be any different. Let's call it 48-24, MSU.

FYI: This is the 12:00 ESPN2 game, meaning that if you're watching at home, you'll be serenaded the whole way by Pam Ward and CMU alumnus Ray Bentley.  Snagging tickets and heading to East Lansing really is the best option here.  (But, if you do, and you're coming from Grand Rapids, Kalamazoo, Chicago, etc., you may want to avoid I-496 -- on Saturday, there will be construction-related lane closures between Waverly and Cedar.  Really, MDOT, couldn't this have been scheduled for next weekend, when MSU is in South Bend?)