Share All sharing options for: Preview: Michigan State vs. Wisconsin

Thanks for one good memory, JLS.

Before the season, most observers expected for MSU to struggle offensively, but make up for with defense. Of course, after the last two weeks, that seems like a big lololololololololol, as our defense has put us in a position where we basically have to outscore the opponent. Against two of the better offenses we'll see all season, we failed barely -- but certainly miserably -- to do that. And so here we are, stuck with essentially the worst case scenario: 1-2, with our only win against an FCS team, heading into Camp Randall (where we haven't won since 2001) to play 3-0 Wisconsin. If last week was a big game, this one is now even bigger and more important, as we've obviously done an awful job of padding our record in the OOC schedule, and now have to salvage our season in conference play. Ending the losing streak and getting off on the right foot is incredibly, incredibly important.

First, let's talk about Wisconsin for a minute. Their three wins have been:

For one thing, I'm completely certain that MSU would have an identical 3-0 record against those teams at this point. Second, if past performance is any indication, Wisconsin's early-season success isn't necessarily going to roll right into the conference season. Remember, they went 3-0 OOC in 2008 before starting 0-4 in Big Ten play. So, anyway, while 3-0 vs. 1-2 certainly impacts upon the general mental state of both teams, I'm equally certain that they tell us very little about which team has been playing better. Furthermore, everything that's written henceforth about Wisconsin comes with the "their OOC schedule is garbage" caveat. Anyway . . . 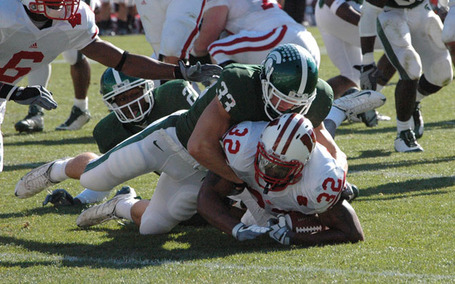 WHEN MICHIGAN STATE IS ON DEFENSE: Prior to the season, most would have expected Dustin Sherer to start for the Badgers; however, Scott Tolzien won the starting job during the offseason and, by in large, has looked quite good through the first three games. (Sherer is currently third on the depth chart. Bret Bielema: crazy, or crazy like a fox?) Tolzien is currently completing around 70% of his passes:

Those numbers include a 281 yard performance against NIU. At the risk of looking through the stereotype lens, it appears that Tolzien is another reasonably-effective game manager, in the mold of every Wisconsin quarterback since, like, ever. Nonetheless, this will be the biggest start of his nascent career; if we can pressure him a bit, that should go a long way toward being successful tomorrow. We were a little better in that regard against Notre Dame; if anything, Wisconsin should be even more reliant than the Irish on 4-and-5 step drops, so the opportunity is there.

Furthermore, as you might have read yesterday, B5Q thinks that we could see a bit of Curt Phillips at quarterback for the Badgers:

But Bielema insists he will use quarterback Curt Phillips if the flow of the game calls for it. Phillips can run – he led the team with 92 rushing yards last week – and if Michigan State has been struggling against spread offenses and wildcat formations, you will probably see the UW offense mix it up a little bit with Phillips at quarterback.

At receiver, the Badgers look a bit like Central Michigan: they feature one big possession-type receiver (Nick Toon) and one little speedburner, presumably from the slot (Isaac Anderson). Toon, whose dad is former Jets wideout Al Toon, is the Badgers' leading receiver with 15 catches for 191 yards and 1 touchdown. However, he doesn't exactly seem like a big-play threat: he's averaging only a shade over 12 yards per catch, and his longest play this year was a 22-yarder. I'd expect for Ross Weaver, who's the bigger and more physical of our corners, to be matched up with Toon most of the game. Anderson, conversely, is the gamebreaker: he has only 7 catches on the season, but those catches have gone for 170 yards (24.3 yards per catch!), including an 80-yard touchdown against NIU.

As you'd might expect, the Badgers heavily involve their tight end in the passing game: Garrett Graham has 11 catches for 142 yards and a touchdown. It's sort of been lost in the shuffle how Kyle Rudolph did a ton of damage against us last week, with 6 catches for 95 yards. We can't afford for Graham to replicate those numbers this week.

Lets' imagine for a minute, that everything before the 4th quarter of last year's Wisconsin game actually happened. (This might be painful.) Probably the single defining characteristic of those three quarters (and the first part of the fourth) was our complete inability to stop Wisconsin's ground game: P.J. Hill ran 20 times for 106 yards, but the contributions of then-freshman John Clay were more devastating: 14 carries for 111 yards and a touchdown, and that doesn't include a big touchdown run in the 4th quarter that was called back for holding. (Yes, Badger fans, it was a hold.) P.J. Hill declared "for the NFL" (ha!) but Clay is back -- sort of. He lost the starting job in training camp, then won it back with a 143-yard performance against Fresno State, and then took that opportunity and fumbled it away -- literally -- by coughing the ball up three times against Wofford last week. Clay's replacement, Zach Brown, also fumbled once. Nonetheless, I'm sure Bielema remembers our struggles against Clay last year; I have to believe that he'll be the primary Badger back tomorrow. Clay was highly recruited from high school; he's big (a Caulcrick-like 250 pounds) fast, and tough. Our rush defense wasn't terrible against Notre Dame last week, but an even bigger effort this week certainly wouldn't hurt.

As for our personnel: after being posterized (is this a word in football?) two weeks in a row, Chris L. Rucker, mercifully, won't be getting the start this week; Kendell Davis-Clark is your second cornerback. I like this move both for motivational purposes, and also because something really needed to be done. KDC has been fairly good over the past few years; normally I'd say that there'll be very little drop-off, but there's not too much further down we can go compared to the past two weeks. As far as I know, Trenton Robinson will still start over Danny Fortener. 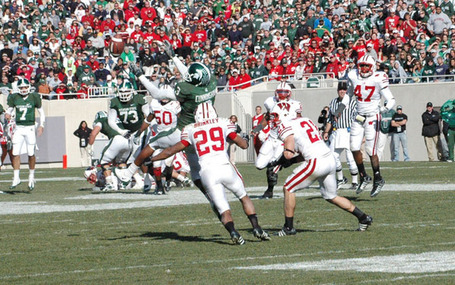 WHEN MICHIGAN STATE IS ON OFFENSE: Wisconsin's secondary was supposed to be good:

Wisconsin's secondary will be the strength of their defense, returning three out of the four starters including junior cornerback Niles Brinkley (5-10, 180), who had a team-high five interceptions last year, and hard-hitting junior safety Jay Valai (5-9, 200) was a second-team All-Big Ten selection after recording 56 tackles and forcing three fumbles in 2008.

But, happily enough, they kinda, you know, suck!

The cornerbacks look awful. Surprisingly, the front seven looks great and free safety Chris Maragos has been all over the field. Unfortunately he can’t cover three wide receivers at one time and apparently UW’s cornerbacks don’t even have the ability to cover one receiver at a time. Sophomore Aaron Henry, who was supposed to be the conference’s best corner, looks confused out there and Antonio Fenelus, Niles Brinkley and Devin Smith couldn’t cover a 90 year-old man playing wideout. If defensive ends O’Brien Schofield and J.J. Watt don’t have career days, Cousins might throw for four touchdowns.

Fresno State passed for 289 yards against the Badgers, and everything I've read suggests that it may have looked even worse than the statistics indicate. Wisconsin's Scout site suggests that the Badger secondary needs this game for "redemption." I strongly doubt that Kirk Cousins will allow that to happen. One caveat: Wisconsin, led by Schofield and Watt, has been fairly effective in rushing the quarterback so far. They have seven sacks this season; our pass blocking this year has been quite good, but the offensive line will be tested.

As I've said previously, for me, the biggest positive about last week's game was the re-emergence of Mark Dell. If he can keep playing well, I don't think anyone in the conference has a better wide receiver corps than Blair White, Dell, and B.J. Cunningham. Given Wisconsin's difficulties defending the pass against lesser opponents, I think we're going to put up a ton of yards through the air.

The Badgers have also looked somewhat vulnerable against the run: they've allowed 493 yards (and a fairly middling 3.8 ypc) and 4 touchdowns over the first three games. Wisconsin's defensive line doesn't have an Erasmus James-type run swallower this year, but, as always, they're big and physical: DT Jeff Stehle, for instance, is 6'6", 310. Larry Caper's effort against ND probably moved our rushing game off run support; this isn't a great Wisconsin rush defense, but clearly the run game is playing second fiddle in our offense. I'd expect our rush output to be around 125-ish; if we go well above that, we're almost certainly winning. Garrett Celek is back in the lineup for MSU this week; he's good in the passing game, but even more importantly, he's probably the best-blocking tight end we have. It also appears that Nitchman might be able to go, which would be another big boost for the line and the rushing game.

FINAL PREDICTION: I feel very, very good about this game. Wisconsin has looked meh against meh competition, we're desperate, and I like everything I've heard from the team this week. More importantly, I think the Badgers are just a good matchup for our team: I think our passing game is clearly better than their pass defense, and I don't think their passing game is nearly as prepared to take advantage of our glaring weaknesses in the secondary. This game may be frustrating at times, because Wisconsin is going to be able to gain first downs on the ground, but I can't see them landing the knockout blow -- and I certainly can see us doing it. Wisconsin's good at home, but we were oh-so-close to winning there two years ago. This year, we won't fall short. MSU 34, Wisconsin 27.