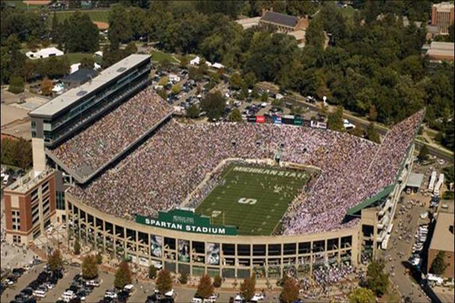 Good riddance, offseason.  It's time to play, as Montana State comes to town on what looks to be an utterly beautiful football Saturday.  The Bobcats are the first FCS (1-AA) opponent Michigan State (herein MSU, dammit), has ever faced; Montana St. finished 2008 on something of a high note, winning 4 of their last 5; additionally, they shouldn't be intimidated by the large Spartan Stadium crowd, as in recent years they have played on the road against Minnesota, Kansas State, Texas A&M, and Colorado (whom they beat, lololol).  Still, this is a game that MSU must win and will win.  The bigger question is whether we'll be able to resolve some of the remaining controversies at quarterback, running back, and elsewhere. 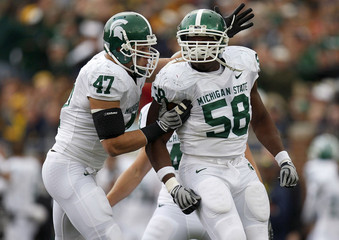 When Michigan State is on defense: As you can imagine, writing this preview is relatively difficult.  I've never seen Montana State play, and after tomorrow, likely never will again.  Nonetheless, it is clear that they return several of their skill position leaders from last season:
Additionally, as commenter MSUBobcats has pointed out, Montana State is reasonably experienced on the offensive line.  Their line has 70 combined starts, which is less than Ivan Maisel's magic number of 75, but is relatively more experienced than MSU's line.
From MSU: I think I'm not alone in hoping, above all else, to see a dominating performance from the defensive line.  Our guys have potential but the results weren't always there last season.  A good showing by Trevor Anderson should be a given; similar performances by Colin Neely and our interior linemen would be very encouraging.  Last season, Minnesota sacked Montana State twice and allowed the Bobcats 138 rushing yards.  I'd like to see us improve on both of those numbers.
At linebacker and in the secondary, I'll be watching to see the new guys: true freshman Chris Norman is in the two-deep at OLB, and I'll be interested to see if he can live up to his considerable, and growing, hype.  Obviously, we're not at all worried about Greg Jones, but he is switching to a new position.  All eyes would be on him anyway, but I'll be interested to see how he acquits himself in the middle.  These are probably unrealistic expectations, but against Montana State, anything less than a dominating performance would be a bit of a disappointment.  In the secondary, I'll be honest, I'm most looking forward to seeing Trenton Robinson play.  Even though he won't be starting, he's been hyped ever since spring practice, and I haven't seen him play yet.  Additionally, I'll be paying attention to Chris L. Rucker, as he transitions to nickelback, and to how our new starting corners perform.

From our friends at Jolly Green Giants.
When Michigan State is on offense: As to Montana State's defense, I'll let their coach speak for himself:

Defensively, we’ve got a headline player named Dane Fletcher, a defensive end who’s a candidate on the watch list for the Buck Buchanan Award, which is awarded to the top defensive player in the country in the FCS [Football Championship Subdivision] division. He’s a great player with a very high motor; he’s a high-energy, active defensive lineman.
Overall, our defensive front seven is pretty strong. But we’ve been riddled with injuries in the secondary, so to me the big question mark in this game is, ‘Can we hold up in the secondary.’ I don’t mean just against the pass, but can we come up and make tackles and get people stopped. We have very little experience there because of the injuries we’ve had.


For those of you keeping score at home, Dane Fletcher is #47.

The offensive preview is short and sweet, as we all know the issues and concerns.  In a perfect world, I'd love for either Kirk Cousins or Keith Nichol to create some separation from the other, so that we have a clear starter going into the Central game.  Given that they've been LOCKED UP IN A TIGHT ONE for the past nine months, that's probably unrealistic.  So, I hope they both play well; given the banged-up condition of Montana State's secondary, this probably shouldn't be too much of a challege.

More realistically, I'd love for one of our running backs to separate himself from the pack.  It's highly disconcerting to me that there's no clear choice between our top three running backs (Caulton Ray, Larry Caper, and Edwin Baker) and hardly any difference between them and the next three (Glenn Winston (ugh -- ed.), and presumably A.J. Jimmerson and Andre Anderson).  This has to end.  We need to narrow the bulk of the carries down to one or two guys, and soon.  I'm guessing that it'll ultimately be one of the freshmen; a great performance from either of them would make me a very happy man while leaving the stadium.

Finally, much as I'd like to see a great performance from the defensive line, I really hope to see our offensive line dominate.  Interestingly enough, the aforementioned Dane Fletcher is a left defensive end, so he'll be lined up against Brendon Moss, one of our new starters; he may/should provide a good test.  Nonetheless, this is the area where a halfway-decent big conference team should be able to separate itself from a FCS opponent: we're bigger and stronger than they are, and we need to thoroughly win the line of scrimmage battles.

FINAL PREDICTION: While these guys aren't terrible, we're simply the better football team.  This looks a lot like the UAB from two seasons ago, and I'd bet that it gets ugly in a hurry.  49-13, M(ichigan)SU.  Please comment away with your thoughts and predictions.

More than that, though, I'm so flippin' excited to get back to the stadium, I can hardly contain myself.  Hope to see many of you in EL tomorrow.  (For those of you watching at home, there'll be a game thread right here for your chatting enjoyment.)