Catching up on Football News

Share All sharing options for: Catching up on Football News

Greg Jones is coming back.

That Jones was a consensus first-team all-American while playing for a mostly atrocious unit speaks clearly to his unbelievable ability.  Jones is the best defensive player we've had since at least Julian Peterson, and will probably end up trumping even him; it's plausible that he'll leave as MSU's all-time leader in tackles.  Either way, this is obviously the best possible news for a beleaguered defense.  Thank you, thank you, thank you.

Eight players have been reinstated, four more are gone.  The reinstated are Mark Dell, B.J. Cunningham, Fred Smith, Chris L. Rucker, J'Michael Deane, Chris D. Rucker, Donald Spencer and Myles White.  All but White were involved in the incident at Rather Hall.  Five of the eight -- Dell, Cunningham, Chris L. Rucker, Smith, and Deane -- are "on the team right now," and have been present in recent team meetings.

Additionally, Ashton Leggett, Jamiihr Williams, Brynden Trawick and Ishmyl Johnson are all transferring.  (Trawick and Johnson have not been charged thusfar.)  Leggett, on the other hand, has "pleaded guilty to two counts of assault and battery in exchange for an agreement by the Ingham County prosecutor's office to drop the more serious charge of conspiracy to commit assault and battery[.]"

"I would just like to apologize for my actions," Leggett said to 54B District Judge David Jordon, during a pretrial hearing. "It was a very stupid act, and, as a group, we weren’t thinking. We didn’t fully understand and know that we would jeopardize our future like this."  [ . . . ]

[Leggett] could face up to 93 days in jail and $1,000 in fines, but his attorney, Hugh Clarke Jr., said that, as part of the plea agreement, the prosecutor’s office is not recommending jail time.

IMO, for a first-time offender, that seems like an appropriate punishment.  Stuart Dunnings has been steadfast in his plan to treat each player individually, so I'm not necessarily sure if Leggett's plea deal is a template for what we can expect for those who actually were involved in the fight. Regardless, the departure list from this incident currently stands at 6, including two likely starters.  The effect on next year's team, even notwithstanding the massive embarrassment this has caused, will be appreciable.

The reinstated players group includes most of the boldface names involved in the saga.  They may be back at the Daugherty building, but they're clearly not out of the water yet:

Rucker’s attorney, Leon Weiss, said his client is pleading not guilty and that the matter is not "an open and shut case."

Damian Amthes, the attorney for Jenrette said his pre-trial hearing was postponed because Amthes had only been appointed by the court to represent him Wednesday.

Amthes said Jenrette had been offered a deal by the prosecutor’s office but declined to discuss details.

If Rucker's pre-trial hearing date is any indication, these court dates may stretch into spring practice.  Blergh.  As for Dantonio's decision to allow the players back:

"We've brought them in the team chemistry now to at least sit in the team meeting room," Dantonio said of the suspended players. "And then we'll make decisions based on what's happened at a later date."

Dantonio said he will allow the "legal process to take its course" before taking any further action.

If that's the case, why didn't he allow the "legal process to take its course" before allowing the players back?  Obviously, Dantonio knows more about the situation than I do (and more than nearly anyone else, given the continuing dearth of concrete information provided about the incident), but separating these guys until their situations were resolved seems like a better path than the one taken.  In any event, Dantonio's action suggests that none of the players will be subject to significant criminal punishment; I still expect that early-season suspensions will be forthcoming for some of the players more culpable for the incident.

Keith Nichol is probably going to be a wide receiver next season.  Nichol had only one catch for seven yards against Texas Tech (and had one crucial drop in the fourth quarter), but apparently he impressed enough that a permanent move looks possible (and probably likely):

"Certainly if you have a quarterback who can help you at wide receiver, we are going to make that decision and put him out there," Dantonio said. "I think Nichol has found a place that he can add great value to this football team, and he's done that at quarterback, too. But it's a competitive situation and you know, nobody wants to have a quarterback controversy. I think he can be a tremendous football player fo us and do a variety of things for us as a football player."

Dantonio then added that Keith Nichol is, in fact, a football player.  Also, LOL at the "nobody wants to have a quarterback controversy" comment.  But, this move would make a ton of sense.  Nichol has athletic ability in spades; he looked decent at receiver even though it apparently was the first time he's played the position in his life, and with Andrew Maxwell on the active roster next year, we would have quite a logjam at quarterback if Nichol remains at the position.  (I had always assumed that Joe Boisture would get a redshirt for next season; given his struggles this year, that seems even more likely now.)  Cousins should be the undisputed starter; it seems clear that Nichol can contribute far beyond bench-warming, and he'd still be available as a fantastic option under center in wildcat-type formations.  Obviously, moving from quarterback to wide receiver isn't an uncommon switch; Marvin McNutt did so for Iowa and we know all too well that it was a good move.   This would be an even better one, as not only might Nichol be a very effective receiver, but it would also remove all traces of the quarterback controversy that plagued our team all season.  Sign me up.

Dan Enos has left for Mount Pleasant.  As I said the other day, I'm relatively surprised that CMU hired him.  Nonetheless, as Enos himself said, the CMU job "is an unbelievably tremendous opportunity," particularly for a non-coordinator.  And it seems equally clear that Enos was hired for Jimmys and Joes, not Xes and Os.  It goes without saying that Enos was our top recruiter; mgoblog notes that

The following [2010] recruits have Enos listed as their primary recruiter on Rivals:

Those are most of our best recruits.  Dantonio has attempted to downplay the effect of Enos's departure, but unless one of the other assistants steps up in a big way, it seems inevitable that there will be some dropoff.  Unhappily, it's a bad year to have that happen: Detroit Renaissance LB Lawrence Thomas is considered the best 2011 prospect in Michigan by a substantial amount; he's a heavy MSU lean but there surely will be other suitors for him.  Landing him (along with others, obviously) will be crucial.

And speaking of recruiting, Will Gholston picked up the elusive fifth star from Rivals.  He's now rated as one of the top 25 players in the country after a senior season filled with destruction and general dominance.

Then there was defensive end William Gholston from Detroit Southeastern. He recorded 113 tackles and an astonishing 27 sacks as a senior, then dominated anybody he faced in the Under Armour game. His efforts in Orlando, and as a senior helped him earn a fifth star as he moved from No. 54 to No. 21.

There have been rumors for quite some time that Nick Saban has been pushing hard to bring Gholston to Tuscaloosa, but there's also no indication that Will is seriously wavering; he sat with Dantonio and Greg Jones at the MSU-IPFW basketball game in December and has remained steadfast in all of his public statements.  We obviously won't know for sure until national signing day in a few weeks, but seeing Gholston sign with anyone but MSU would be a huge shock at this point. 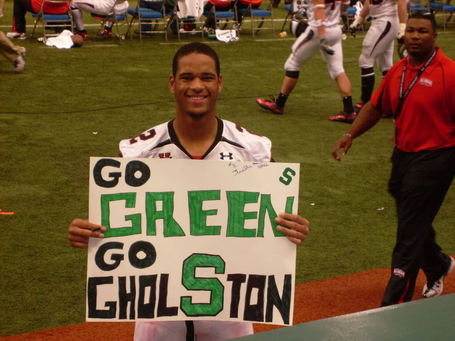