Linking Laconically Could Get Used to These Nostalgia Trips

Share All sharing options for: Linking Laconically Could Get Used to These Nostalgia Trips

BONUS NONLACONIC COMMENTARY: So, as Pete mentioned, I was one of the 850 or so who showed up at the Breslin Center last night, desperately trying to capture our college glory days.  Annnnd, it was honestly a ton of fun.  The praise the alumni section has been receiving has been a little over-the-top, IMO; it was an average crowd by Izzone standards, and almost certainly not as loud as the full section would have been for the Wisconsin game.  (To be fair, the normal Izzone section is almost twice as big.)  Still, we were much better and louder than a normal winter break crowd would have been, and so it should be regarded as a success.  In his postgame comments both to the crowd and to the media, Tom Izzo certainly seemed pleased with how everything turned out.

On a personal note, I brought my cowbell, played it for the first time in 3 years, and, defying all odds, managed to not screw it up.  +1 to me, ha.  The game, along with the trips to The Riv and Pachero's, certainly made the miserable drive back to Chicago today slightly less painful.  If they do another one of these next year (fingers crossed), I'm so there. 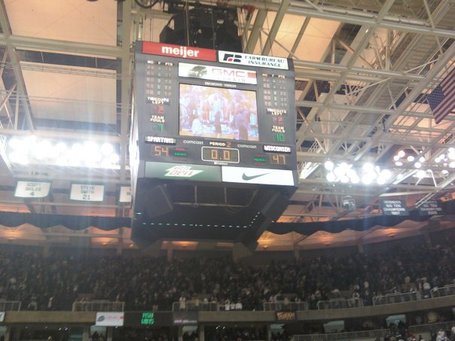 As for the game itself, I cosign everything that Pete said, and add only a few things of my own.