A Midnight Madness Eve Scatterplot: MSU in the National Landscape

Share All sharing options for: A Midnight Madness Eve Scatterplot: MSU in the National Landscape

With the phasers officially set on "National Championship," there's no sense limiting our preseason scatterplotting to the Big Ten, right?  Let's go national.  As a bonus, due to the disproportionately-high amount of production the conference returns from last season, we'll get a glimpse at a good portion of the Big Ten's participants, as well.

A reasonable way to get a high-level view of the relative strengths of a set of basketball teams going into a season is to take measure of (1) how good they were last season and (2) how many of the players that made them that good return for the new season.  A more sophisticated model would also account for (1) how productive the returning players were on both offense and defense, (2) what the projected talent levels of incoming players are, and (3) which teams have new coaches.  We're currently getting those more complex projections from Dan Hanner one conference at a time.  Still waiting for the Big Ten.  For now, we'll go with the simpler, more graphical approach.

The scatterplot belows compares adjusted efficiency margin and returning minute percentage (both pulled from KenPom, and accounting for transfers/early entries) for potential national championship contenders this season.  I defined that group as (1) the top ten teams in adjusted efficiency last season (minus Kentucky, whose returning minute percentage of 22.9% was off-the-charts low) and (2) consensus preseason top ten teams for the upcoming season (working off Rush the Court's rankings and giving Washington the benefit of the doubt).  Keep in mind that there are 300+ more data points to the left of this group. 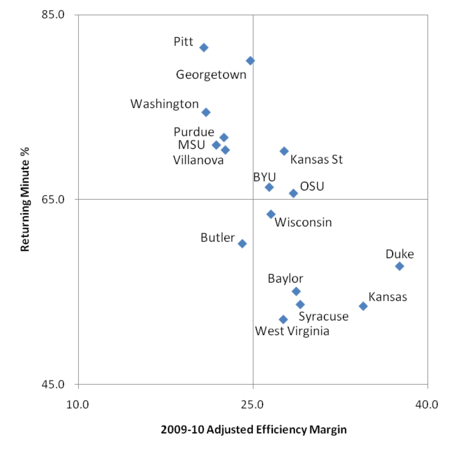 Commentary after the jump

Clear as mud, huh?  Unlike the last couple years, there's no clear preseason favorite.  Last season, Kansas entered the season having posted an adjusted efficiency margin of 25.8 the prior year (not great, but solid) and returned a full 87.8% of its player minutes (off the chart above).  The season prior to that, North Carolina was coming off a 36.6-adjusted-efficiency-margin year with 68.4% of its player minutes returning (not counting Marcus Ginyard, who would end up sitting out the season due to injury); that'd be straight up from Duke on the chart above, between BYU and Kansas State on the vertical axis.

This year, you've got a rim of teams surrounding the upper, right-hand quadrant where an ideally-positioned title contender would be.  Moving from right/bottom to left/top:

Morals of the scatterplot: (1) winning a national title is an entirely reasonable goal for MSU, but (2) that's a true statement for at least a half dozen teams going into the season.

Update: Apparently, I was typing this at the same moment Mr. Hanner was finalizing his Big Ten projections.  MSU comes in tied at #4 (with Wisconsin), among the clump of five fairly-tightly-bunched potential powerhouses at the top of the league.  Hanner rightly points out that MSU was not, in fact, a dominant operation statistically last year.  He has them improving a bit this year, but more on defense than on offense.  That's the opposite of what I would think intuitively--but Chris Allen and Raymar Morgan's stats were better on the offensive end, even though I think we'll miss their defensive skills more (no individual stat for "sticking with your man to prevent open shots").  Becoming more efficient on both ends of the court (since they're starting from roughly the same baseline on offense/defense) will be a necessity if the Spartans are, in fact, going to compete for a national title.  You know where you can read more about that?  Yeah, I bet you do.