Share All sharing options for: Preview: Michigan State vs. Illinois

I usually start these previews with an embedded YouTube video or picture or something to represent our dominance over that week's opponent.  So, I went looking for an interesting MSU-Illinois video.  Uh, fail.  (This is as good as it gets.)  I then looked for a picture of Sparty tackling Chief Illiniwek or something similarly obnoxious.  Another fail.  There's the little matter of Illinois planting its flag in Spartan Stadium in 2006, but those were totally different MSU players, a totally different MSU coaching staff, and we don't have the moral high ground on this issue, so I really don't care.

The truth is that this has been one of the most boring Big Ten series for Michigan State, although in a very good way:  MSU has won 10 of the last 11 matchups with the Illini, and Illinois hasn't beaten MSU by more than 4 points in more than 25 years.  Last year's game was a snoozer, with a reeling Illini team looking, well, overmatched against MSU in Champaign.   This is clearly a different Illinois team than last year, and a substantially better team than we expected; they clearly represent a major stumbling block on MSU's road to a special season.

The storyline this week has revolved around this being a major "letdown" possibility for MSU, but how about for the Illini?  To some degreee, they're playing with house money, because nobody expected them to be this good, but they're also coming off a huge win, playing on the road for the second week in a row, and fresh off games against Ohio State and Penn State -- two of the marquee programs in the conference, and games in which you normally expect teams to give maximum effort.  The possibility of a flat performance by the Illini can't totally be discounted, either.

Anyway, let's go in depth, after the jump. 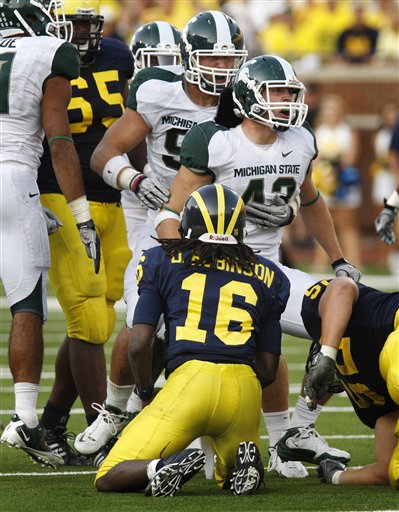 When Michigan State is on defense they'll be seeing a heavy, heavy dose of Mikel LeShoure, one of the best running backs in the Big Ten, and possibly the country.  LeShoure ran for 120 yards on 27 carries (4.4 ypc) against Penn State last week, the fourth time he's had 100+ yards rushing this season, and the 7th time in his last 11 games.  Illini beat writer Bob Asmussen on LeShoure:

"Really, really good.  [ . . . ]Watch when he gets hit, he moves forward 2 or 3 yards every time. He doesn't have the same speed burst as Rashard [Mendenhall], but he's more powerful and a better inside runner. I can see both of them playing for years in the NFL."

LeShoure saw limited action against MSU last season, mostly in the second half, but he accounted for all the Illini scoring in the 24-14 loss: he ran the ball 3 times for 22 yards and a touchdown, and also caught a 41 yard touchdown pass from Eddie McGee.  The guy is good.  Fun fact: in the game against PSU last week, the announcers said that LeShoure's mom meant to name him Miguel, but misspelled his name on the birth certificate.  Miguel becoming Mikel -- that's not even close, lady.

The Illini are piloted by true freshman Nathan Scheelhaase, a newly-minted member of the Reggie Cleveland All-Stars.  Scheelhaase has been adequate but not spectacular; he's completing 59% of his passes but only averages 128 yards passing per game.  Illinois is likely to deploy its passing attack only to compliment the rushing game.  When Scheelhaase throws the ball, it's likely to be to either A.J. Jenkins or Jarred Fayson; each has 20 receptions, but Jenkins is the much more dangerous receiver (14.1 yards per catch, as opposed to 8.1 for Fayson).  Scheelhaase is also a significant threat to run the ball: he's averaging 4.7 yards per rush and 55.4 rushing yards per game.

Illinois starts two juniors and two seniors on the offensive line, and between LeShoure's success and the fact that Scheelhaase has been sacked only eight times, it seems clear that they're pretty decent as a group.

I said yesterday that this isn't a terrible game for Chris Rucker to miss because Illinois isn't a great passing team.  While I still think that's mostly true, Rucker is quite good against the run, and Illinois may try to run the ball wide to Darqueze Dennard's side of the field.  MSU's outside linebackers will be key to prevent Illinois from taking advantage of those situations.  I thought Eric Gordon and Chris Norman were excellent against Michigan last week; hopefully they can carry that momentum forward.  Additionally, as Illinois doesn't have a ridiculously threatening passing game, we can probably expect Trenton Robinson and Marcus Hyde to play farther up toward the box this week to help defend the run. 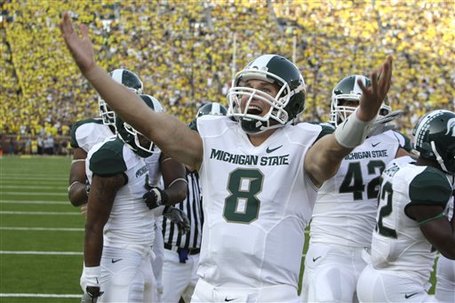 When Michigan State is on offense they'll be contending with an Illini defense that has played very well so far this season, but isn't exactly a juggernaut.  To briefly review yesterday's post: Illinois is 37th nationally in pass defense, 56th in pass efficiency defense, 32nd in rushing defense, 20th in total defense, and 21st in scoring defense.  Good numbers, to be sure, and Illinois' game notes relate that in the two Illini losses, Mizzou and Ohio State were each nonetheless held to their lowest scoring outputs on the season.

The Illini defense is led by Martez Wilson, who plays the Mike linebacker position in Illinois' 3-4 scheme.  Wilson is finally living up to his considerable hype and surely is one of the best defensive players in the conference; he's led the Illini in tackles in each of the past 3 games (11 against Northern Illinois, 9 against OSU, and 12 against PSU).  He's very athletic and gets to the ball in a hurry.  Defensive tackle Cory Liuget is also having a big season for the Illini: he has 5 TFLs, 18 tackles, and has required double teams by opposing offensive lines, opening up opportunities for Illinois' other defensive linemen.

Baker, Caper, and Bell will have a more difficult time getting through the line and breaking tackles this week; Evan Royster is having a hugely up-and-down season, but he was decidedly down last week against Illinois: 11 carries for only 35 yards.  MSU will almost certainly have more success than that, but it won't come easy this week.

I think there's a strong possibility Kirk Cousins has a big day on Saturday.  The Illini have some talent in the secondary--most notably, safety Trulon Henry--but the defensive pass efficiency rating isn't all that impressive.  Cousins has looked better with each passing game, and I think this week won't be an exception; I think MSU throws it early and more often than usual, and has a lot of success doing so.

Special teams: Illinois is probably the only Big Ten team that has matched MSU's special teams prowess thus far.  Derek Dimke is 10-for-11 on field goals so far this season, including 2-for-2 from beyond 50 yards, and is coming off a 4-for-4 performance against Penn State.  Punter Anthony Sentella is no less impressive, currently ranking second in the country with a 47.9 yard average.

Final prediction: I'm tempting fate here, but I like MSU to not only win this game, but win it comfortably.  As I wrote above, I think Illinois is the team primed for a letdown, and MSU has shown the ability to take full advantage of any Illini mistakes. Cousins has a big day, MSU goes up 2 scores early and never looks back.  31-17, MSU.  And if we lose, remember: I never said any of that.

How do you see it unfolding?