Share All sharing options for: Impressions: MSU at Iowa 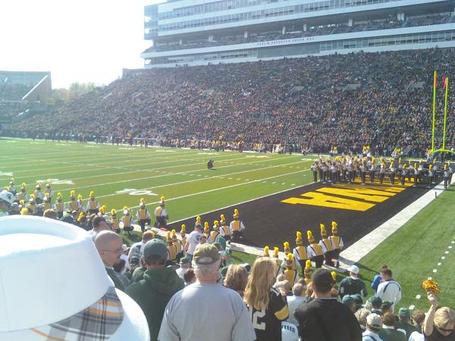 Once again, who visits another stadium and forgets to bring a non-cell phone camera?  This guy.

So, right off the bat: the game was not good.  So bad that by halftime, I was resigned to defeat; by the time I walked out of the stadium, I already had nearly two hours to get over it, and so I wasn't all that upset about the whole thing.  I was a little miffed that we didn't improve much in the second half -- Cousins' third interception right after the half was a nice touch -- but it wouldn't have made a difference.  MSU played horribly, but it hardly mattered because even if we played well, Iowa still would have romped.  It was that kind of day.

There may or may not be Biggies and Slappies this week, because, really, what's the point?  Nobody played very well for MSU, and nearly everyone played poorly.  I can't blame the wide receivers much, and that's probably it.  Iowa's defense was obviously fantastic, though not necessarily because of their star players.  I thought Adrian Clayborn didn't do a whole lot, but Mike Daniels was Iowa's best defensive player during the first half.  Similarly, Karl Klug was fantastic in the second half.  Basically, the Hawkeyes' interior defensive linemen shredded MSU's offensive line.

Anyway, the less said about the game, the better.  About the trip itself: if you have the chance to go to a game in Iowa City, do it.  The stadium is great, the fans are friendly, and the tailgating is really fantastic.  Bullets, after the jump.