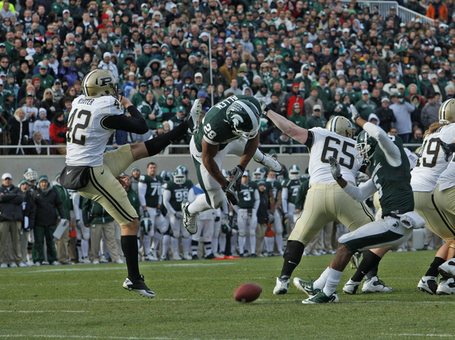 Taking it in the gut. (Photo credit: MSU Football)

I don't usually know exactly what to be looking at (other than the ball) when I'm watching a football game, but I do know that, when your team only sends three guys after the punter, they're playing for the return.  I was, therefore, somewhat shocked when there was no punt for Keshawn Martin to field and the crowd started going berserk. Denicos Allen didn't care so much about the set-up-the-return plan.

BTN highlights are here.  No embeddable highlights this week so enjoy this instead:

Kirk Cousins after the game:

"I can't plant my leg and pivot off it without excruciating pain," he said, "so I have to play with flat feet."

The man looked like he could hardly walk at times yesterday.  And he had to get a painkilling shot in his left shoulder at halftime.  Gutsy, gutsy performance.

Unfortunately, it's also one more reason to be worried about next week's game in Happy Valley (which has somehow been scheduled opposite the Michigan-Ohio State game; BOOOOOO!!!).  It'll be very interesting to see where the line opens.  Sagarin says MSU by 3 (based on the PREDICTOR ratings); I could easily see it swing to a 3-point edge for PSU.

The Rose Bowl looks like a long shot, but it's not every year MSU plays for a share of a Big Ten title.  Go Green.