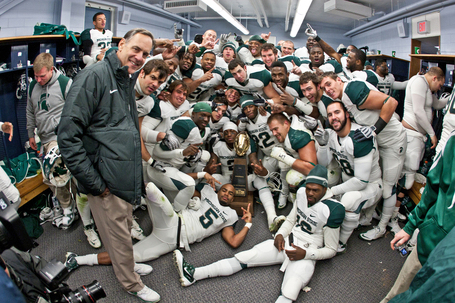 So, barring a PR miracle by Mark Hollis, it's off to Orlando for the third time in 11 years and the second time in three years.  [Edit: 4th time in 11 years and third time in four years when you count the Champ Sports Bowl.]  Sadly, a head-to-head win doesn't work as a mathematical solution to a three-way tie.  And, in the world of big-time college football, a remarkable, inspiring run by a traditional mid-tier team will get trumped by the allure of a traditional economic power every time when it comes to a BCS at-large bid.  (Shades of 1999, in fact, when, Michigan went to the Orange Bowl ahead of MSU despite being tied in the standings and having lost to MSU head-to-head.)

The good news (sort of) is that MSU should not lack for motivation in the Capital One Bowl.  The opponent is very likely to be an Alabama team led by a fellow we once employed.  The Capital One people get first pick among SEC teams not going to a BCS bowl.  As far as I can tell, they can skip over the top available team in the SEC standings to go no more than one game down the standings in terms of overall record.  Arkansas (2 losses) is a likely BCS at-large selection.  LSU (also 2 losses) played in Orlando last year.  That makes Alabama (3 losses), which hasn't appeared in Orlando since 1995, very attractive.  If South Carolina upsets Auburn in the SEC Championship Game, then maybe Arkansas becomes the pick (since Auburn would then occupy the second SEC BCS slot).

Back to the moment: Big Ten Champions.  Very few, if any, of us thought this was in the cards before the season started.  But the cards fell, and our Spartans took full advantage.  Soak it in.