There (but distantly so) or not there (but in HD)?

Share All sharing options for: There (but distantly so) or not there (but in HD)? 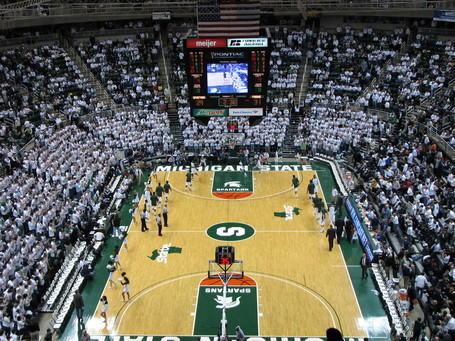 The view from the top.

It's Friday, and that mean we're picking back up on our (three-part!) series, sponsored by Samsung, on the impact technology is having on college sports.  And what better technology to focus on in a series sponsored by a company known for selling TVs than . . . the TV?

To set the stage: As I mentioned earlier this week, I was able to procure season tickets for the MSU basketball season this year.  That's the good news.  The bad news is that the seats are in the very last row of the upper deck.

This will create a significant change in my MSU basketball routine.  Over the last 10 years or so (since I finished grad school at MSU), I've watched the majority of home games on TV.

So here's the question: Given the two options--sitting in row 19 of the Breslin Center upper deck or watching the game at home on your 50-inch flat screen TV--which would you choose?  To assist with the discussion, here are the pros and cons of each situation:

Pros of being at the game:

Cons of the being at the game

Pros of watching the game at home

Cons of watching the game at home

For me, being on site is still the preferred choice (hence the decision to procure the season tickets, knowing they'd be distantly situated).  Having a flat screen TV has definitely narrowed the gap, but there's still nothing like being in the building when a big MSU dunk goes down or the Spartan pull out a close game late.  The balance tips further in the direction of being at Breslin for big games, of course; the investment of the time (and money) can seem less worthwhile to watch a 30-point blowout against Southwest Tennessee A&T at Cookeville.  But being a fan is about creating an emotional link to a sports team rooted in something outside rational self-interest.  And being in the building, and enduring any discomfort that may come with that, is a great way to enhance your fabricated connection to the team.

Concur?  Nonconcur?  Questioning the irrationality of your fandom?  Discuss.