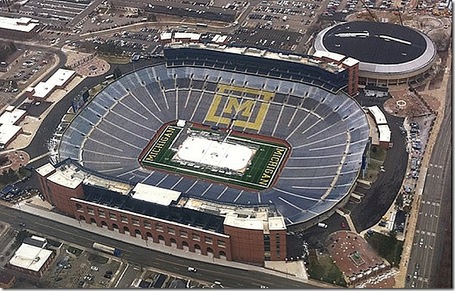 You may notice something odd about that header. "Michigan Stadium", not "Yost Ice Arena". In case you've been living under a rock, no, that's not a typo. The "Big Chill at the Big House" is the sequel to the Cold War 10 years ago, which until about seven months ago held the world record for highest attendance at any hockey game.

Tale of the Tape

Note: The CCHA uses different rules for its standings than the NHL or any other college conference. A win is worth three points in regulation or overtime. If the game is still tied after five minutes of OT, both teams get credit for a tie in the official NCAA stats (used for determining the Pairwise Rankings which decide the tournament bracket), then play a shootout. The shootout winner gets two points and the loser gets one. (Unlike the NHL, an overtime loss is still worth zero points, and a shootout win is not worth as much as an overtime or regulation win.) That's where that (0) comes in for both teams - each has been in one shootout in conference play and lost.

MSU At A Glance

After a decent start to the year (1-0-1 three weeks in a row against Maine, Alaska, and Alabama-Huntsville), the team hit a disastrous 1-6 stretch (swept by Western, split with Ohio State, swept by Notre Dame, loss to Ferris State) going into Thanksgiving weekend and the last annual College Hockey Showcase (pitting Michigan and MSU against the WCHA's Big Ten teams, Minnesota and Wisconsin). Things seem to have stabilized a bit since, with a split in the Showcase (beat Minnesota, lost to Wisconsin) and another against Ferris, but it's going to take a lot more than .500 play to dig out of the hole we're in.

The good news is, thanks to the insane Pairwise Rankings emphasis on non-conference games (which can allow you to steal points via the "common opponents" factor), those non-conference results leave us in a decent position to make the NCAA tournament if we get things turned around and finish in the upper third of the conference. How likely is that? Judging by the fact that we're a very young team (just two seniors on the roster) and three of our top four point-getters (Corey Tropp, Jeff Petry, and Andrew Rowe) from last year are gone, probably not very likely.

If anyone's going to be putting the puck in the net, there's a good chance it'll be Brett Perlini. He's got 11 goals (including three of the four we scored in two games at Western, the only games I've actually seen this year), tied for 8th nationally; nobody else on the team has more than five. Dustin Gazley takes a fair number of shots and has lit the lamp five times. Derek Grant and Daultan Leveille are also frequent shooters with three goals apiece; Leveille actually leads the team in +/- (team scoring margin while on the ice, not counting power play goals) at +3.

Defensive stats are pretty hard to track well (aside from +/-, but that's not even purely defense), so I'm not really sure who to highlight here. Torey Krug is a very offensive-minded defenseman, tied with Gazley for second at five goals and fifth on the team in shots on goal. Jake Chelios (yes, that Chelios, along with younger brother Dean) is a bit of a sniper, with four goals on just 18 shots. However, these are the bottom two on the team in +/- (Chelios at -6, Krug tied with forward Zach Golembiewski at -5).

Drew Palimsano has played better than 90% of the minutes this season, with a .914 save percentage (31st nationally). Not great, not awful either.

Michigan At A Glance

Michigan has cooled off a little bit recently after a hot start (1-2-1 last four against Minnesota, Wisconsin, and 2x Ohio State), but make no mistake: this is a good team. The puck seems to be bouncing more their way this year than it did last (given that their goal difference is very similar on a per-game basis but the record reflects it more closely this time). Their 1-2-3 record in non-conference play (0-1-1 in the Showcase and a split against recent defector-to-the-WCHA Nebraska-Omaha, plus ties against New Hampshire and Mercyhurst) gives them significantly less room for error in conference play to get to the tournament, but so far they haven't made too many errors. With 13 players already drafted by NHL teams (MSU, by contrast, has four), this is clearly a very talented team.

Michigan's goal-scoring is more widely distributed than ours; three players are tied for the team lead with seven goals and two more have six. Carl Hagelin (the reason for the giant Swedish flag you'll undoubtedly see in the Michigan student section) is their most frequent shooter and one of the three leaders, along with David Wohlberg and Scooter Vaughn (a sniper, with seven goals on just 35 shots on goal). Louie Caporusso is close behind with six goals and and leads in +/- at a whopping +14.

Joe Merrill (3 goals, 8 assists) and Brandon Burlon (4 goals, 6 assists) rank 3rd and t-4th among Michigan point-getters (goals plus assists), respectively. Tristan Llewellyn leads the defensive corps in +/- at +7 (behind Caporusso and Luke Glendening for third on the team as a whole).

We're probably going to need Palmisano to help steal this one. Hogan and Hunwick appear to have gone all Freaky Friday this year; last year it was Hogan who was mediocre, with Hunwick substantially better in limited duty near the end of the season. Drawing penalties and cashing in would be a huge boost; we do have a slight advantage on special teams and tend to get more opportunities than our opponents while Michigan tends to head to the box a little more than their opponents. Our young defensemen are going to need to step up against Michigan's deep attack; the top pair won't be able to be on the ice against all of Michigan's scorers. That said, from Brian's Michigan hockey summary-to-date, it appears that Michigan doesn't have a true shutdown defenseman to match up against Perlini.

Our chances don't seem good, but who knows. The inherent randomness of hockey is much greater than that of football or basketball, where you have a lot of opportunities to screw up and kill a drive or a massive number of random trials which are somewhere on the order of 50% success instead of 8-9%.