Your intrepid reporter goes to Dick's (with his camera phone)

Share All sharing options for: Your intrepid reporter goes to Dick's (with his camera phone)

So the new uniforms are apparently not a special-edition, one-week thing: 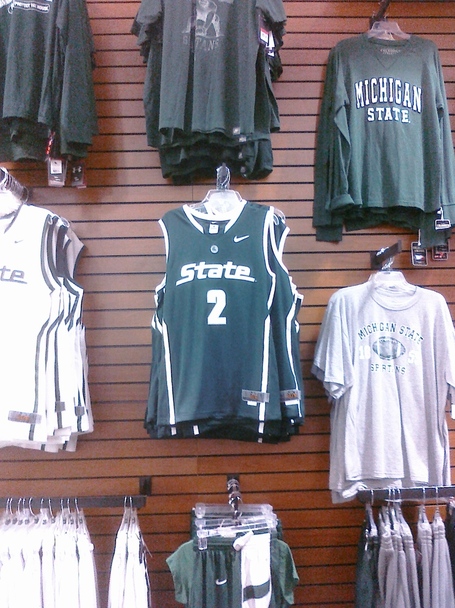 First off, I'm completely on board with the darker-green thing.  You can't really tell in this photo, but the jerseys are clearly darker than the other Nike merchandise hanging on the wall.  The darker forest green is probably the most prevalent shade among the plethora of greens out there on MSU merchandise right now.  And anything north of Kelly green that becomes a consistent standard is fantastic.  (Question: Will the university really stringently enforce the one-green-only requirement with the multitude of companies that produced licensed Michigan State clothing?)

But I'm not so crazy about the stylistic features of these new jerseys.  Hyperanalysis after the jump.  Note that I'm using the photos of the home uniforms because the details show up better on the white background, but the road uniforms have exactly the same features. 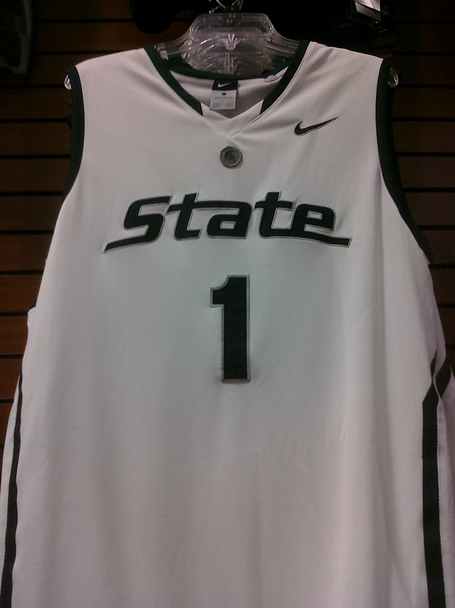 So far so good.  The fronts of the tops look almost exactly like the old uniforms, which I liked for their simplicity.  The modern script "State" is there; that's become a fairly integral part of the MSU basketball brand over the last decade.  I'm not crazy about the striping around the edges, but I can live with it.  There's at least once classic, iconic college sports uniform out there that utilizes striped edges. 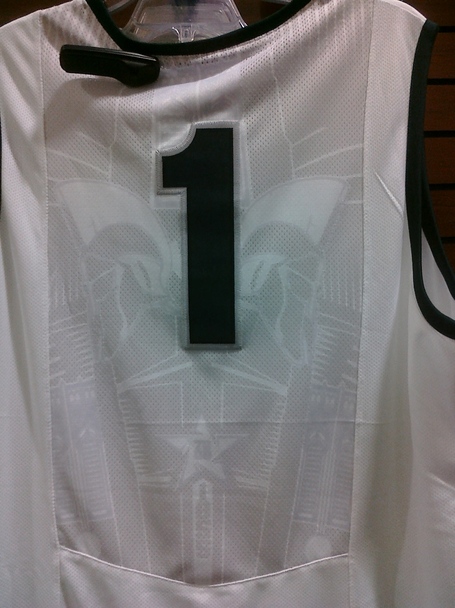 Do not want.  A similar pattern had been added to the home uniforms we started the season with (but not the road uniforms, I don't think).  This is part of a larger Nike basketball uniform trend.  I didn't like it when they added it to the previous uniforms, but it was at least based around the traditional Spartan logo.  This pattern is more complicated, with a variety of uninterpretable symbols plastered on it (is that a backgammon board?), and incorporates a more "realistic" Spartan helmet.  I have to assume the pattern was designed before the reverse-face on changing the Spartan logo, so hopefully we'll at least go back to the standard helmet logo next season.  But I'd much prefer to just scrap this entire mess. 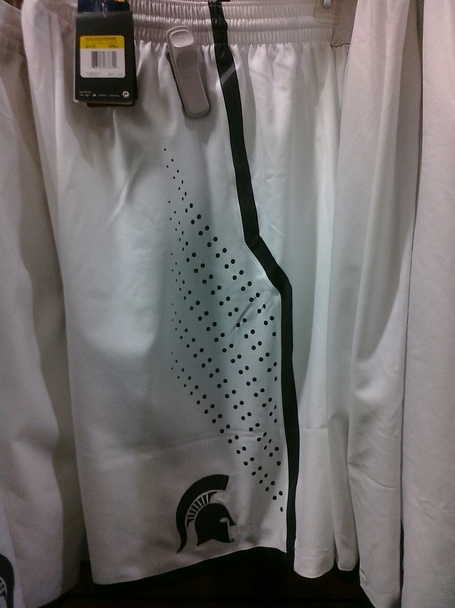 Those dots are holes in the first layer of the material, with the interior layer of material providing the darker color behind.  Presumably, this will make the players' upper leg muscles cool off more quickly. [/sarcasm]  The entire bottom half of these shorts is full of FAIL: the patterned dots are distracting, the bend in the striping further detracts from the uniform's sleakness, and the logo faces backwards.  (So opponents can see which team they're playing when an MSU player is out in front of them for a breakaway dunk!).  At least's it's the correct Spartan logo, I suppose.

In the end, the things I'm complaining about here aren't matters of earth-shattering concern--particularly since we'd already crossed the funky-mural-looking-thing-on-our-backs threshold.  MSU did, after all, win a national championship wearing something that appeared to have been designed by a tribe of Aztecs.  But I am concerned that these features represent a significant step down the road toward completely giving in to Nike's eternal quest for edgier looking retail merchandise.

Tom Izzo has traditionally been resistant to Nike's multi-team uniform restyling campaigns; he reportedly vetoed MSU going to those big-honking-logo uniforms that North Carolina and Michigan wore in the early 2000s (shortly after MSU had switched from Reebok to Nike).  I'm afraid that resistance to that sort of thing may now be futile.

As an MSU-sports-apparelaholic, I'm actually a big fan of Nike apparel--when they keep it simple.  These new uniforms are distinctly not simple.

OK, I'll exit "you kids get off my lawn" mode now.  Back to your regularly-scheduled programming: winning a Big Ten championship.