Do Tom Izzo teams get better as the season goes on?

Share All sharing options for: Do Tom Izzo teams get better as the season goes on?

[Note: Post has been updated with TOC-produced scatterplots at the bottom.]

The Duke Blue Devils tend to play less efficiently as the conference season goes on: 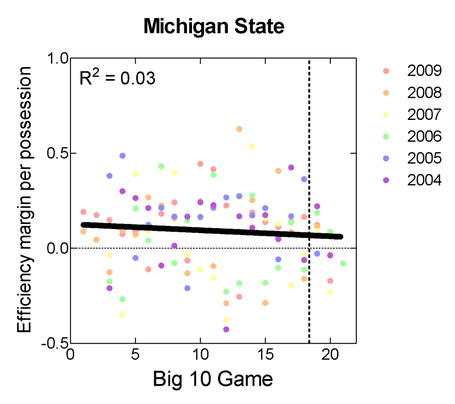 These charts were produced by the Duke Chronicle in an attempt to determine whether Duke's performance tends to decline over the course of the season due to Mike Krzyzewski relying too heavily on his starters.  The decline in performance is confirmed.  The reason for the decline is not; there doesn't appear to be any correlation between how deep a particular Duke team is and how deep that team's bench is.

The MSU chart was produced (along with a UNC chart) to see if the late-conference-season decline held for other nationally-prominent basketball programs--which it doesn't.  Michigan State was selected because the conventional wisdom is that Tom Izzo teams improve as the season goes on.

I don't think that's quite right, though, as illustrated by the chart.  A more accurate portrayal might be that MSU tends to perform better in the NCAA Tournament than it does in Big Ten regular season play.

But is that even a true statement?  The only season in the time period on which the charts above are based in which MSU had major NCAA tournament success despite a somewhat disappointing conference season was 2005, when MSU finished 2nd in the Big Ten but made it to the Final Four.  Of course, that team posted a not-too-shabby 13-3 record in conference play that season, finishing behind only an Illinois team that would advance all the way to the National Championship game.

(The 2005 Final Four run was perhaps more surprising to MSU fans because of the Alan-Anderson-missed-free-throw-fueled flameout vs. Iowa in the first found of the BTT than because of finishing second in the conference during the regular season.)

Outside of the 2005 Final Four appearance, MSU won at least a share of the Big Ten title in each of the other four Final Four seasons during the Tom Izzo era.  The only other (arguably) disparate NCAA-vs.-conference outcomes of the Izzo era came in 2003: subpar 10-6 conference record, Elite Eight appearance.  And the following season you had a reversed set of outcomes: improved 12-4 conference record, first round NCAA loss.

Update: Here's a scatterplot of my own on that last point: 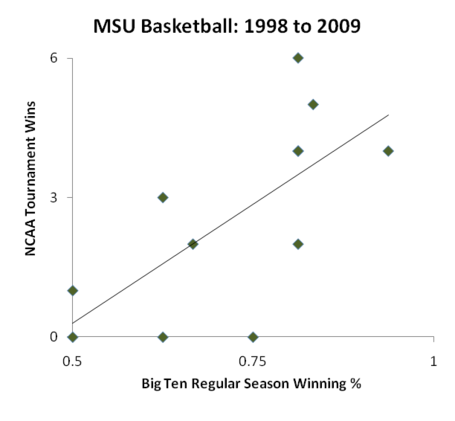 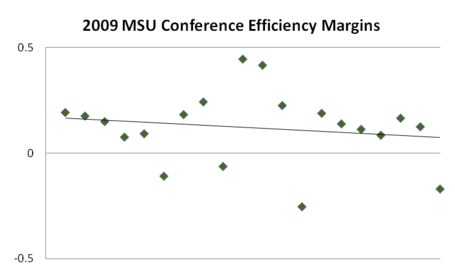 Although this trendline probably needs to be flattened out over the next three weeks if our Spartans are to make another run toward/into April: 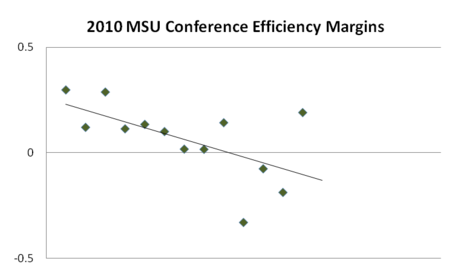 Final thought: It may be that the notion that MSU performs better in the NCAA Tournament than in the Big Ten is a function of the seven-year conference title drought.  The thing is that, during those seven years, MSU only got to the second weekend of NCAA Tournament play three times.

Here's to more consistent year-to-year performance in both potentially-banner-producing phases of the basketball season going forward.