Three hours ago we were undefeated in Big Ten play, up 3 games on the entire league, entering a game with our arch-rival, who was missing its best player.

At this moment, we are quite decidedly no longer undefeated in Big Ten play, up just 2 games (in the loss column) on 4 different teams, staring down two very difficult games--very likely without our best player.

There's not much point in dwelling on what happened on the court.  MSU was out shot by 20 percentage points (in eFG% terms) and out-turnovered by 15 percentage points.  Winning the rebounding battle (which didn't happen until the second half) and getting to the free throw line more frequently didn't matter much.

Wisconsin came out red hot from beyond the arc and only cooled off slightly as the game went on, getting some very friendly bounces from the Kohl Center rims.  I think I'm correct in saying (I'm not going back to check) that Jordan Taylor and Tim Jarmusz--both of whom are sub-.300 three-point shooters on the season--started the game a combined 3-4 from beyond the arc.

Officiating wasn't the difference in the game (we did have a 16-4 advantage in FTA), but it certainly didn't help.  The referee crew came out clearly determined to set an anti-physical-defense tone.  That initially helped when Trevon Hughes picked up 2 early fouls, but the situation quickly reversed when Kalin Lucas and Raymar Morgan did the same.

Going back to analyze the officiating in detail is a nonconstructive activity.  But let me say this:

Ed Hightower is an embarrassment to the Big Ten and, more broadly, the sport of college basketball.  A referee should never be in a situation in which he's shown, on national TV, yelling back and forth with a head coach from 6 inches apart.  If Izzo was over the line, T him up.  Otherwise, get the heck away from him and do your job.  There's no explanation for that behavior other than simply wanting to be in the spotlight.  So here you go, Ed: 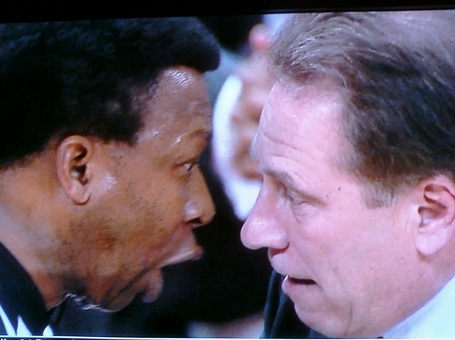 We lost to a superior team tonight.  Given our history in Madison, that's frustrating enough.  But, of course, the bigger concern is the status of Kalin Lucas' right ankle.  The initial (but not definitive) signs are that there's no structural damage.  Regardless, given the amount of pain he looked to be in after he went down and the fact he avoided putting any pressure at all on it when he left the court--you have to think he's going to miss some time.  The next two games (at Illinois, home to Purdue) suddenly look extremely losable.

If Lucas is indeed out, Korie Lucious (who was not great but not entirely bad tonight: 9 points, 5 assists, 3 TOs) becomes your starting point guard, and a wing player to be named later becomes your back-up point guard (my guess: Chris Allen, since he's not scoring right now anyways).

We should know more tomorrow.  The road to a Big Ten title just got a lot rockier, my friends.