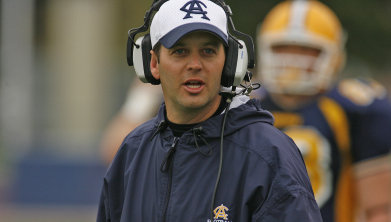 Danny Enos's replacement is Brad Salem, who was a graduate assistant at MSU under George Perles and Nick Saban, and most recently was the head coach at Augustana College (SD).  Salem (bio) went 31-26 in five seasons at Augustana, with 8-4 seasons the past two years.  (Those two 8-win seasons each tied the school record for victories in a season.)  Salem's father, Joe, was the head coach at Minnesota from 1979 to 1983.  Adam Rittenberg opines:

This is an interesting choice for Michigan State and Dantonio, who hasn't had to replace an assistant in a while. Enos was one of the Big Ten's top recruiters and helped Michigan State improve its presence in the Detroit area. Salem will have huge shoes to fill from a recruiting standpoint, and he hasn't been in the area for a while. But his background as a former high school coach could be beneficial as he tries to build relationships in the state.

While the running game was clearly not a strength last season, the future looks brighter: Caper and especially Baker got better as the season progressed.  Salem surely will feel fortunate to have such promising young talent to work with.  (Of course, having to replace three starters on the offensive line won't make the job any easier.  Coach Roushar, that's on you.)

It's true that Enos' departure hurts the most in recruiting, but I certainly don't think (as Rittenberg seems to) that by signing on as our running backs coach, Salem also automatically becomes our recruiting pointman.  It's possible that Dantonio was specifically looking for a recruiting ace to fill the void left by Enos, but it seems doubtful that a Division II head coach would be hired for the opening if that were the case.  Clearly, the entire staff will have to pick up the recruiting slack, but you'd figure Harlon Barnett, Mike Tressel, and the coordinators to be a little more prominent in Enos's absence than a new hire who's returning to the conference for the first time in fifteen years.

Familiarity probably had something to do with this hire: Dantonio certainly knew Salem personally, as Salem's tenure as an MSU graduate assistant overlapped with Dantonio's time as an assistant coach under Nick Saban.  But, there are absolutely some other positive indications here: Salem has not only a strong Big Ten pedigree, but demonstrated success as a head coach.  He's not a name that most will recognize, but new positional coaches hardly ever are.  And, while Enos is gone, the relationships he forged between MSU and Detroit-area coaches surely will continue to pay some dividends; in that sense, Salem's job is easier now than it would have been three years ago.  If Salem can expand those relationships and continue our recruiting success, then that would obviously be a huge bonus.  Here's hoping.