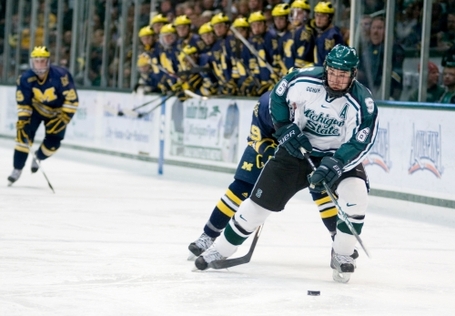 No upsets in the CCHA first round (in fact, the home team swept all four series), so Michigan comes to town. This preview is going to be a bit light on personal observations; I've seen very few games this year (one of the hazards of living over 1000 miles away) and thus have to rely on the boxscores and team stats. Pairwise update will follow the series preview.

Tale of the Tape

Despite a better record, we're both scoring fewer goals and allowing more overall. In conference play, our goals against was slightly better but net goal difference was still worse. If we define difference between the record you would expect based on goal difference and the actual record as "luck", then Michigan has been spectacularly unlucky this year: one game over .500 in conference despite a +14 GD in 28 games is pretty hard to do. My minimal observations, combined with reading some previews and recaps from Brian and looking at the boxscores, have led me to a possible alternate explanation for this phenomenon. (Be sure to check there, as his preview will almost assuredly be more thorough than mine. That's the advantage of actually being able to see games.)

One observation Brian had early in the season is that Michigan has had a tendency to put up insane shot totals but lose as most of the shots are stopped and the few shots the opponents get trickle through. In losses this season, they have outshot opponents by 10, 13, 15, 12 (the 2-0 loss at Munn), 10, 25, 18, 33 (a 4-3 GLI semifinal loss), 15 (their only tie of the season), 9, and 18. Their 33 shots on goal per game is probably near the top nationally (I can't find a list of teams ranked by shots per game), but they rank just 20th nationally in goals. This leads me to suspect that Michigan tends to just throw the puck at the net at every opportunity and hope something good happens - not a bad strategy in general. Against bad teams, these chances typically result in a lot of goals as they get many good scoring opportunities or pick apart a weak goalie. But against stronger opposition, this often leads to frustrating games where you're outshooting the opponents by a wide margin but they're all poor-quality shots and easy saves. (Red Wings fans will probably recognize that description all too well.)

Game-by-game goal totals seem to bear this theory out a bit: 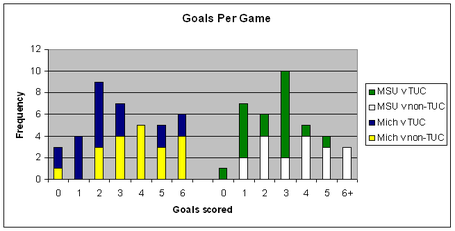 (We have one game scoring more than 6 - a 10-1 win over Michigan Tech. Rather than stretching the axis, I just lumped that into the "6+" category.)

Michigan's per-game totals against all opposition have a surprisingly flat distribution. Break it out into games against the RPI top 25 and the bottom 31, and there's a clear pattern: they scored 3 or more goals 80% of the time against the lower tier, but just 37% against the top. We, on the other hand, scored 3+ 67% against the lower tier and 56% against the upper. Michigan does have four 5+-goal games against teams under consideration (Alaska, Minnesota, Northern, and us) to our one, but they've been shut out twice by TUCs and held to one goal four more times. We've been held to one goal or none six times against TUCs as well, but we put up 3+ ten times to Michigan's seven.

What does it all mean? Our defensemen and goalie Drew Palmisano are going to have their work cut out for them. An off night in our own zone is probably going to be an ugly loss. If we can limit Michigan to taking mostly low-quality shots, we may well get outshot but we'll likely come out ahead in the only category that matters. Palmisano is certainly capable of stealing a game or two if we get outplayed; he ranks ninth nationally with a .922 save percentage. Michigan's goalie situation is not so bright: Bryan Hogan ranks 55th at .901. (Hogan has been out for the last few games due to injury; backup Shawn Hunwick is .915 in five appearances, which would be good for 18th if he had the minutes to qualify. He has two shutouts - one of which was the game in which Hogan was injured midway through the first - but gave up five to Notre Dame on just 25 shots in another game. I haven't been able to find any confirmation on Hogan's status for this weekend.)

A fair amount of movement around us over the weekend. New Hampshire's 0-1-1 weekend against Boston College has us stealing the point thanks to a tiny TUC lead (9-9 to 11-12). Unfortunately, UMass sweeping Maine turned out to be far more significant than I expected: it gave them an insurmountable common opponents lead and a lead in TUC (11-9 to 9-9). End result: Still 12th, still with 12 out of a possible 24 points. Assuming Bemidji State wins the CHA tournament and the four major conferences (WCHA, CCHA, ECAC, Hockey East) do not have a surprise auto-bid winner, we need to remain at least 15th to get in.

Doesn't look likely that there will be much movement around the TUC cliff. There's a .006 gap (which works out to about the equivalent of a win for the trailing team and a loss for the leading team, give or take) between RPI #25 BU and #26 Northeastern, and Northeastern's season is done. Ohio State is another .0027 back and about to be disemboweled by Miami. Short of a Merrimack sweep of BU or a major upset or two involving teams near the cut line, the top 25 looks unlikely to change.

We seem to be in reasonable shape as teams behind us start having to play each other. That limits the amount of damage that can be done. With Vermont and UNH facing each other, and Ferris and UNO, it's unlikely that any more than two of those teams can take the point if we lose 2-1.

All predictions here should be taken with a grain of salt, as there are so many games in play and it's hard to say exactly how much the RPI will swing one way or the other on a win or loss, but the bottom line: Win the series and it will be hard for us to be left out (though it might still be possible if we lose twice at the Joe). Lose 2-1 and we're likely to be sitting right around the cut line. Get swept and all bets are off.

All with an eye toward guaranteeing qualifying. Seeding really doesn't make that much difference except on the 1 line, where you are potentially playing for a home site and/or a weak auto-bid for your first opponent. Otherwise, bracketing follows the S-curve perfectly as long as it doesn't result in a conference matchup in the first round.

Totally irrelevant, as they have no one in at-large contention.

Root for Bemidji State to win it all, as they're the only at-large contender in the conference. They face Niagara in one semifinal; Robert Morris vs. Alabama-Huntsville is the other. Importance: Critical if we lose, minor if we win

After this weekend's games, USCHO will put up the Pairwise Predictor, which lets you input hypothetical results for the final weekend and see the resulting Pairwise standings. So by Sunday night we should know exactly where we stand and what we need. Win the series and we'll probably be looking more at seeding and bracket possibilities than whether or not we're in. Lose and it will be a long wait until the tournaments resume next weekend and we learn our fate.