We had some fun with this a couple years ago, so I thought I'd take another crack at it.  Bulleted explanation/caveats:

Still, I think the charts help tell the story of each team's conference season.  Plus they're just cool for gazing at.  Right?

Outside of spikes for the two Northwestern games and the Indiana game and the slugfest in West Lafayette, the offense was actually fairly consistent (but not highly efficient) over the course of the season.  The defense improved after the midseason open-shot-fest, although it would have been hard not to.  Funny how Kalin Lucas' injury appears to have impacted the defense more than the offense.

After the jump, we'll run through the other 10 teams in the league, in ascending order of Big Ten Tournament seeding. 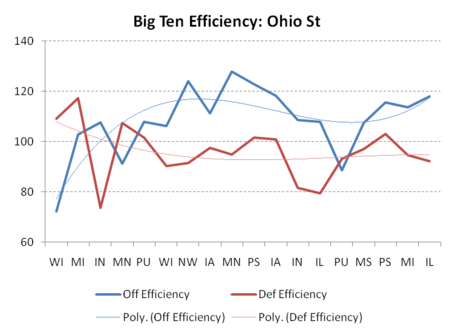 I call this one "Evan Turner makes a difference--a really big difference."  The Buckeyes are scoring very efficiently and playing consistent defense right now, but that's basically been true over the last 14 games. 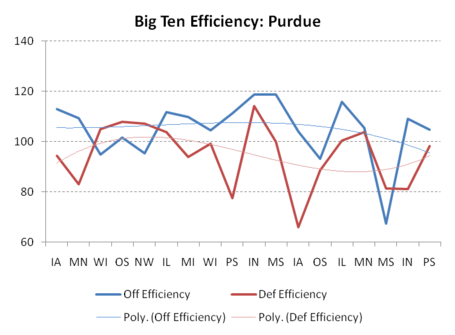 Outside of the basement-level offensive output against MSU, the Robbie Hummel injury doesn't really show up here.  But that's a function of playing two of the three worst teams in the league in the final two games. 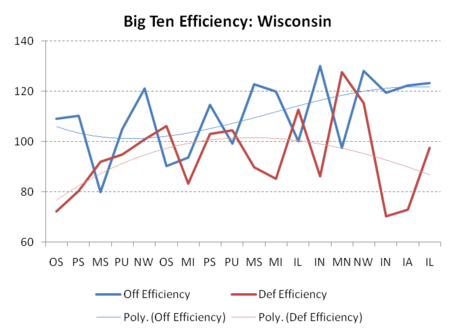 Exhibit B as to why the fourth-place Badgers may, in fact, be the favorites to win the conference tournament.  Offense steadily improved over the course of the season; Jon Leuer's return from his wrist injury for the final five games helped.  Defense is surprisingly inconsistent (but mostly good). 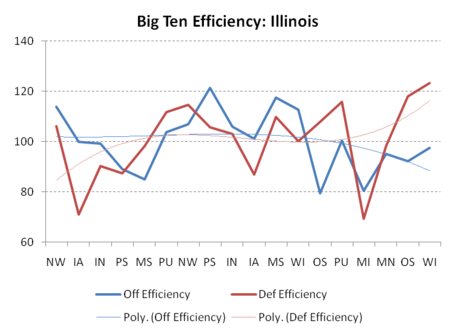 Decidedly average team most of the season--up until the end, when they tanked on both sides of the ball.  Backloaded schedule is a major factor there. 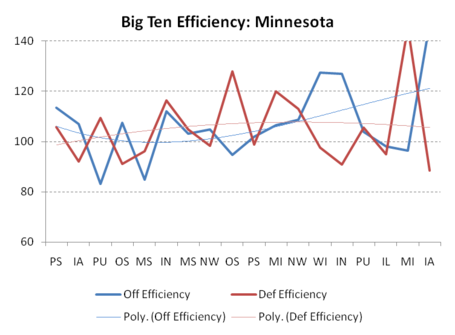 Slightly below average team for the first half of the season.  Showed some life with blowout wins vs. Wisconsin and Indiana (the latter more impressive than the former, obviously).  Back-to-back blowouts of inverse directions to end the regular season make for an inelegant-looking graph. 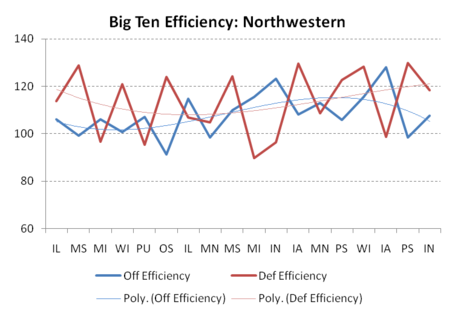 Defensive numbers form what looks like the output from a heart rate monitor--nearly perfect up-and-down pattern between a well-defined range of 100 and 120 (i.e., not good).  Doesn't correlate with home/away games, either.  Offense improved some over the course of the year; Wildcats posted eFG% of at least 50% in all of their final 9 games.

On average, this was an average team.  But the averageness was the net result of very inconsistent play on both ends of the court.  Offense looks pretty dismal if you take the two Minnesota games out--not that Minnesota is a complete defensive pushover; they just apparently have no idea how to guard Manny Harris (42 points) or DeShawn Sims (50 points). 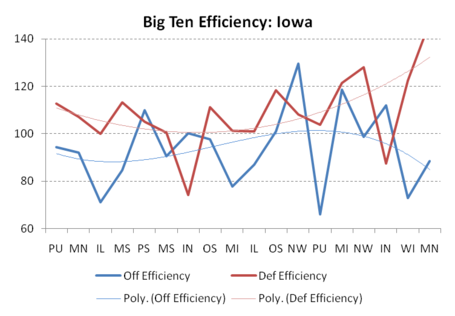 Defense went from average to very, very bad as season progressed.  Offense looked decent for a bit there, but two games against Northwestern in a four-game stretch tends to do that.

If not for that closing win against Northwestern, the simplest interpretation of this graph would be that the team completely quit on its coach.  On the other hand, you have to give the Hoosiers for playing like a semi-competitive team for the six-game stretch to start the conference season on the heels of losing Maurice Creek. 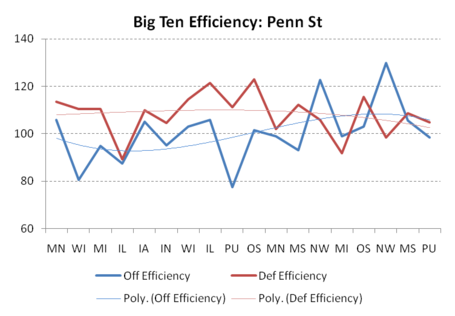 I told you the Nittany Lions were the most dangerous conference tournament #11 seed in the country.  The trendlines say this is a (slightly) above average Big Ten team at the moment.  Offense has improved markedly since the beginning of the year, as Talor Battle's supporting cast has stepped up.  Defense is still below average, but not to a last-in-the-conference degree.