Spring Practice started on Tuesday.  Quite obviously, other MSU sporting events have diverted most of our attention from the goings-on at the Daugherty building; we'll have more once basketball is over.  Here's something to whet your appetite: 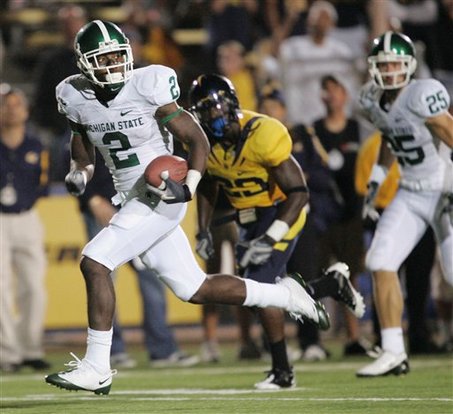 1. How will the reinstated players fit back onto the team?  As you surely already know, Mark Dell, B.J. Cunningham, Chris L. Rucker, J'Michael Deane, Donald Spencer, and Chris D. Rucker have been reinstated, and will participate in spring practice.  (The first four pleaded guilty to misdemeanor charges, and received probation and 150 hours of community service each; Spencer and Rucker were present at the fight but were never charged.)  Currently, WR Fred Smith is the only player whose status is still in limbo; he served four days in jail for his actions, but Dantonio said that before reinstatement, Smith "needs to take care of his judicial responsibilities," whatever that means.

In sum, eight of the fifteen players involved are already gone or are in the process of departing the program; Smith might be the ninth, though that seems unlikely.  Those eight include one starter and several players who would have challenged for starting roles this season and next. The latest departure is starting NT Oren Wilson, whose impending transfer will certainly hurt from a football perspective; however, he's also probably the least sympathetic person involved whose name isn't Glenn Winston.  You might recall that Wilson played in the Alamo Bowl, while all of his co-conspirators were suspended; essentially, he concealed his involvement even after Dantonio demanded a full accounting, and played in the game while his equally-culpable teammates stayed home.  Fantastic display of character there.  Don't let the door hit you on the way out, Oren.

As for the guys who have returned, reasonable arguments can be made that they should have been kept out of spring practice and/or suspended for some number of games during the upcoming season.  (I suppose game suspensions are still a possibility.)  Mark Dantonio is taking a pretty substantial risk by letting these guys back onto the team; if there's any recidivism amongst the group, the egg on the coach's face will be even more pronounced than it was last time.  Ultimately, however, I think it's the correct decision.  Dell, Cunningham, Deane, and Chris L. Rucker each were only convicted of misdemeanors--not felonies--and aren't required to serve jail time.  They each have already suffered substantial football-related punishment, as none of them played in the Alamo Bowl.  (That has to be, at the very least, the equivalent of suspending them for the first two or three tomato-can games of the season.)   They're all accountable to their teammates, as well: the bowl game was close, and the presence of those players could have made a big difference in the outcome.  Given the fact that none of the reinstated players were central figures in the melee (that we know of, of course -- details of the situation are at this point are still disappointingly sketchy), I think second chances are appropriate.  In any event, it's not like this is going to be out-of-sight, out-of mind; they'll be reminded of their actions each time they step onto the field on the road next season (Michigan fans are going to be brutal to these guys next season, and I understand why), and there'll still be many thousands of words dedicated to their actions and the aftermath (like yesterday's typically indignant and stupid effort from Drew Sharp.  What, Drew, you expected Dantonio to dwell on the topic voluntarily?).  None of that will go away easily, or really at all.

Anyway, from a football perspective, clearly this helps.  With Cunningham, Dell, Keshawn Martin, and now Keith Nichol, among others, we'll continue to have one of the strongest--if not the strongest--receiving corps in the conference.  Chris L. Rucker was one of last season's less atrocious cornerbacks, and he should probably start this season.  The team and the coaches will no doubt welcome their presence.  It's less clear to me how they're going to be received by the fans.  It sounds obnoxious, but they each played a role in greatly embarrassing my favorite team and, more importantly, my alma mater; given that, I'm sure I'm not the only MSU grad who feels personally embarrassed by extension.  None of the four is in the Eric Knott category (or even close to it), but at the moment I can't imagine myself being thrilled to cheer for any of them personally.

Actual discussion about football, after the jump. 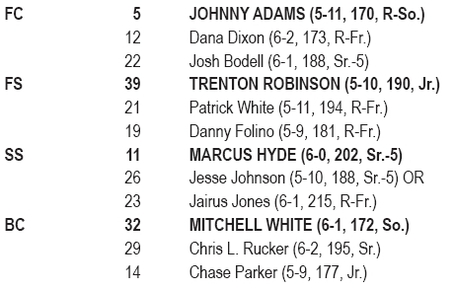 Rucker is behind White solely because of his involvement in the brawl; we can expect him to start.  At the other corner, Johnny Adams showed some potential as a redshirt true freshman last year in 2008, and played but will need to make some signficant strides in order to shore up his place in the lineup.  Two starters return at safety, Trenton Robinson and Marcus Hyde.  (Granted that Robinson started only about half the time.)  Robinson was a breakout performer during spring practice last year, and then had a meh-to-ugh season on his own.  Essentially, there's experience at all four spots, but given the carnage of last season, that may or may not be a good thing.

If there's going to be any push from underclassmen for starting roles, it would seem that Jairus Jones and Dana Dixon would be the most likely candidates.  Dantonio mentioned the two by name when speaking to Adam Rittenberg earlier this week:

We have four guys back with plenty of experience. They've all started at one point in time, whether it was [Trenton] Robinson or [Chris L.] Rucker or Marcus Hyde or Johnny Adams. So that gives us a nucleus on which to build. And then guys like Jairus Jones are going to come in and play, and some of our young freshmen, Dana Dixon. We need to get better at the back end.

At the very least, they can provide depth to a unit which badly needs it.  The problem here is that the four probable secondary starters all either started last season or saw signficant playing time; therefore, we almost have to count on the coaching staff to engineer a breakthrough here.  After watching the pass defense become more and more inept with each passing game last season, do you really trust Narduzzi & Co. with that responsibility? 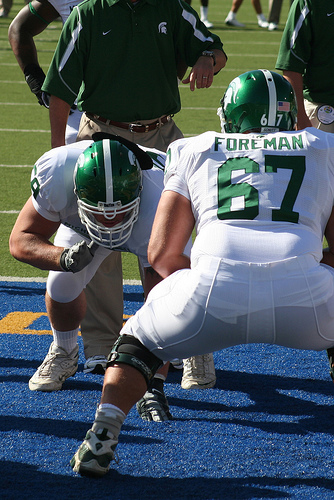 3. Holy crap, we have to replace three starters on the offensive line?  Um, yep.  Because it was such a disaster last season, the secondary grabs all the attention, but offensive line is probably a bigger question and greater need.  Joel Foreman is back at left guard, which is very good.  D.J. Young switches from right tackle to left tackle, presumably to have a veteran protect Nichol's Cousins' (ed: blergh.) blindside.  And then, three spots are up for grabs, as Rocco Cironi, Joel Nitchman, and Brendon Moss depart from a line which was reeeeeally up-and-down last season.  (Up, as in the line only allowed fourteen sacks all season.  Down, as in, well, look at any game and see how badly the running game struggled.)

The good news is that each of the three probable starters has experience, and two have significant experience.  John Stipek, your probable center, is a fifth-year senior who started against Central Michigan and Notre Dame last season when Nitchman was injured.  Jared McGaha, probable right tackle is a junior who contended for the right guard position last season that ultimately went to Moss.  I'll admit to knowing very little about actual offensive line play, but it does seem that that Moss must have been substantially better for the coaches to start a fifth-year senior over a then-true sophomore.  Redshirt sophomore Chris McDonald is the projected starting right guard; he was a three-star recruit who saw some playing time in four games last season.

Dantonio describes the line as "a work in progress."  I hope the coaches work quickly.  With three starting positions available for the taking, there's certainly room for someone relatively unknown to break through during the spring or in August, but by the time the spring game rolls around, we should have a better idea where things stand. 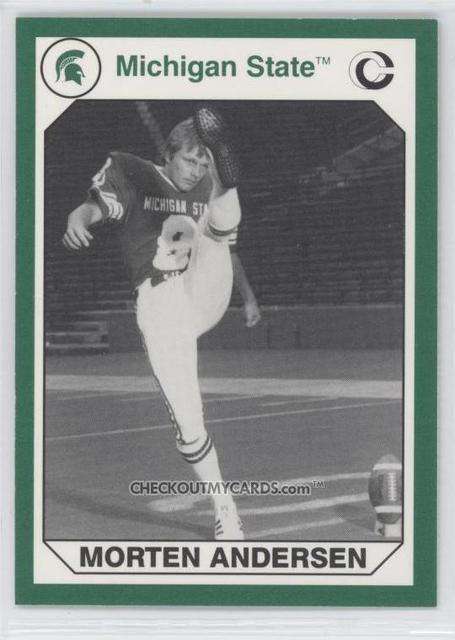 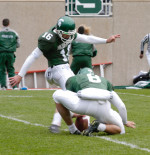 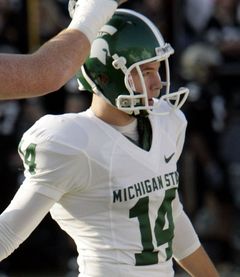 Penn State might be LINEBACKAH YOO, but East Lansing is the Cradle of Kickers (TM).

4.  Holy crap, Brett Swenson's not kicking anymore?  Sadly, not for us, at least.  Swenson was awesome and spoiled us rotten.  The last time Your Spartans had to deal with the departure of a highly-regarded, multi-year starter at kicker was 2005, when about 15 different guys battled it out to replace Dave Rayner.  And, by "battled it out," I mean, "they were all absolutely awful."  John Goss missed two field goals--23 yards and 37 yards (in overtime!) against Michigan, in a game we lost in overtime by 3.  The next week, he had two kicks blocked at Ohio State, including the one you all remember.  (The coaches were screwin' it up, but the kicker didn't exactly get a whole lot of air under the ball, either.)  MSU ended up going 5-16 (5-16!!!) on field goals for the season, and toward the end of the season, went for it on fourth down on many occasions you would normally kick.  The team ended up 5-6 that year; had the kicking not sucked so badly, we would have, at the very least, made a bowl.  That psyche you up enough?

Anyway, your two contenders for the job are sophomore Dan Conroy and redshirt freshman Kevin Muma.  You might remember Conroy from such kicks as the gorgeous 43-yarder he hit against Montana State, when the coaching staff got bored with sending Swenson in again.  Muma was a Parade All-American at Troy High; during his senior season, he kicked a 53-yarder, and 78% of his kickoffs went for touchbacks.  Enlightening quote from Dantonio:

We have a kicker with no experience back. [Dan] Conroy kicked one field goal [in 2009], but for the most part, it's been [Brett] Swenson's job for four years. So Kevin Muma and Conroy will compete for that, and it'll be interesting to see how that plays out.

Erm, thanks for that, coach.  I haven't the faintest idea who will win the competition; I just hope that whoever wins does so emphatically, and ends up being good.  (Obviously.)  Some dropoff from Swenson is inevitable, but we've been in a situation where we can't trust the kicker, and that's a baaaaad place.  Let's hope to not go back.