Only stat you really need to know: For the first 25 minutes of today's basketball game, Raymar Morgan outscored the entire Michigan Wolverine basketball team by himself, 19 to 18.  Michigan State held a 46-18 lead with 14:57 left to go in the game.  The Spartans couldn't keep up the intensity and got outscored 30-18 from that point on (it'd be great if we could look a little less shocked to see a full-court press), but this game was never in doubt after the halftime break.

Before the break, MSU played perhaps its best 20 minutes of basketball of the season.  They hounded Michigan mercilessly on defense.  The downside to that approach was getting called for a half dozen fouls in the first 10 minutes.  But the advantages more than offset: forcing 11 Michigan turnovers (in roughly 32 possessions) and holding the Wolverines to 5-23 field goal shooting.

Manny Harris (4 points on 10 FGA for the game) and DeShawn Sims (9 points on 8 FGA) could never find a rhythm, and the supporting cast couldn't step up.  Michigan shot just 4-21 from 3-point range over the course of the full game.  Zack Gibson (10 points on 6-7 FT shooting) was the only Wolverine to take advantage of MSU's defensive aggressiveness and score going toward the hoop.

Offensively, MSU's game plan was to pound the ball inside.  There were some sloppy moments along the way in executing that game plan (9 first-half turnovers), but Raymar Morgan and Delvon Roe combined to score 23 points before halftime.  And MSU pulled down 8 of 16 offensive rebounding opportunities in the first half to further take advantage of their size/strength advantage.

MSU's dominance in the paint shines through in the four-factor graph:

One minor gripe: For a team that purports to like getting out in the open court, MSU sure blew quite a few fast-break opportunities off Michigan turnovers.  Something to work on before the team plays non-Big Ten foes in the NCAA Tournament who might not exert so much effort preventing the Spartans from running on offense.

Let's restrict the bullets to just the three seniors tonight:

(Other quick hits: Very quiet game for Draymond Green--2 points, 1 rebound, 3 assists.  How 'bout that sequence where Derrick Nix shut DeShawn Sims down on two attempted drives and forced him to kick it back out?  Durrell Summers continues to look discombobulated on offense, but it was good to see him knock both of his 3-point attempts.  Added: Forgot to mention Chris Allen's superb defensive efforts against Harris.)

As far as Senior Days go, this one measures up quite nicely.  There's not quite the same level of satisfaction as there was with last year's outright conference title, but the banner that was raised today wasn't a cheapie, either.  Tom Izzo on this topic:

"I said at the beginning of the year, we had a chance to win a Big Ten championship," Izzo said. "Maybe it didn’t go all like we wanted, but promise me, please enjoy it. Because it’s not an easy feat these days."

Next Up: MSU will be the last Big Ten team to take the court in Indianapolis this week, playing at 9:00(ish) Friday night against the Minnesota-Penn State winner.  That's a fairly unattractive pair of possible first-(second-)round opponents: A team playing for a last-gasp shot at the NCAA Tournament and the most dangerous conference tournament #11 seed in the nation.  The upside, I suppose, is that neither team should be able to coast in the Thursday game.

Bonus!  A Slideshow of Photos That Could Have Only Been Taken by a Random Fan in the Stands! 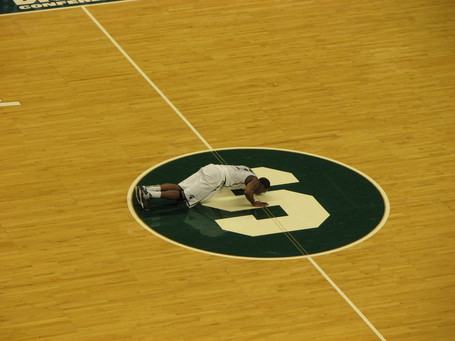 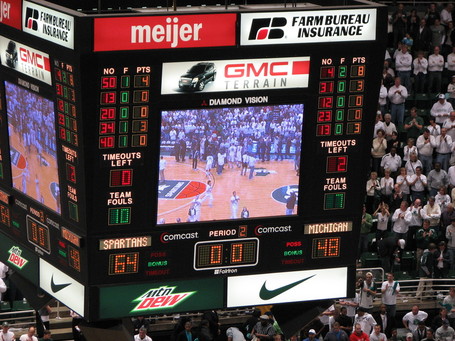 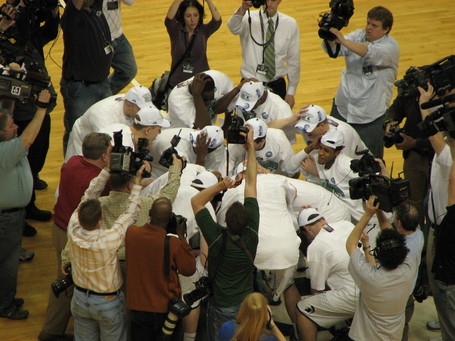 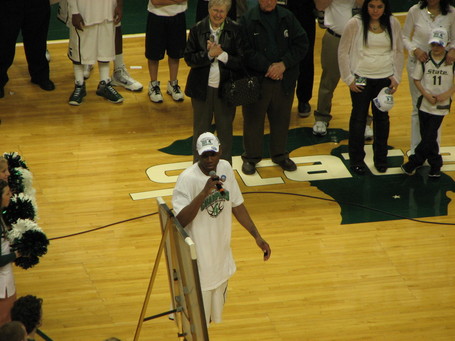 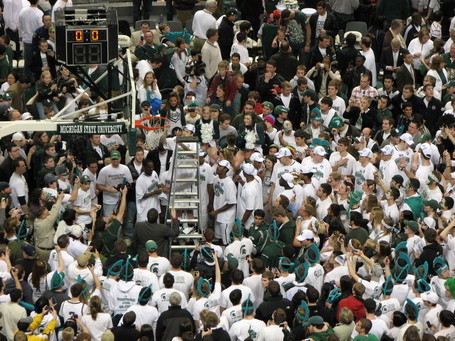 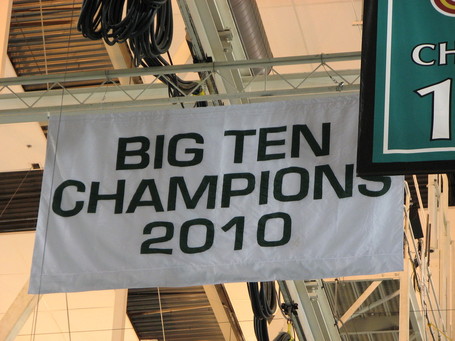