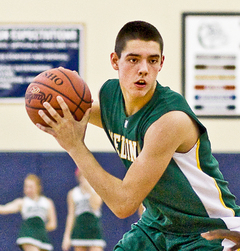 In case there isn’t a 2012 Hotlist on the site soon, I thought it might be good to put up a post about 2012 Medina, OH SF/PF Kenny Kaminski.  According to tRCMB, Kaminski recently moved his decision announcement up to June 30 from the original date of July 31st.  Earlier this month, he told the Courier-Journal of Southern Indiana that he was "really leaning towards Michigan State."   With this constellation of events in mind, MSU fans have reason to be optimistic that Kaminski might be a Spartan this summer.

One of Kenny Kaminski’s strengths is his versatility.  While coaches are always looking for inside/outside individuals like Raymar Morgan, most players ultimately end up in a niche of either playing in the post or on the perimeter.  Scouts believe that Kaminski can succeed in both roles as an offensive and defensive player at the college level.  He is quick enough and solid enough in his ballhandling to work on the perimeter but, at 6’7" 215lbs, his size gives him the ability to score down low and guard bigger players. After watching Kaminski play at the SPIECE tournament on May 2nd, LifeInLansing.com bball blogger St8izGr8 referred to him as "legitimately a combo guy...Indy Elite used him both inside and on the perimeter and he looked comfortable defensively in both spots.  He was guarding actual guards at times and hung in there." Also, Kaminski is an excellent shooter and this is regarded as a principle strength of his game.  Recently, ESPN had this to say:

Kaminski is an offensive machine and an excellent shooter out to 22 feet with his feet set. When he is aggressive on offense, he can put the ball on the floor and create for himself with two or three dribbles, which is just enough to free himself for his patented jump shot. He has a good basketball IQ and is a good passer -- both inside and on the perimeter. Kaminski also can post up and score on the low block. He prefers to shoot over his opponent or perform short drives off ball fakes to score at the rim. Kaminski is also a decent rebounder, but that is not the main reason he is on the floor.

Considering he has yet to play his junior year of high school basketball, the important aspects of Kenny’s game will likely continue to develop - his strength, ball-handling, rebounding, etc. He'll arrive in college as a big-bodied wing forward who can make moves around the basket but also step out and hit a three.

In addition to Michigan State, Indiana and Ohio State have each offered Kaminski a scholarship but one interview gave the impression that OSU has some catching up to do.  Though he has talked about interest from some other schools and the potential for summer visits, the smart money appears to be that this is a two school race between Indiana and MSU with MSU being the team to beat.  I, for one, am excited about the prospect of Kenny Kaminski joining the MSU family.