Share All sharing options for: The 2010 Big Ten Football Outlook from 1,000 Feet

One of the reasons (although certainly not the only reason) that I spend a lot more time looking at basketball stats than football stats is that advanced basketball stats are so much more elegant.  The performance of a basketball team can be neatly summarized by four numbers on each end of the court, with a simple measure of overall offensive/defensive efficiency.  The complex organizational structure inherent to football, meanwhile, results in statistics that are much harder to interpret and compile into meaningful and comprehensive metrics.  (Plus there's a major sample size problem.  By the time you have enough useful data to analyze for a given college football team, the season's almost over.)

The folks at Football Outsiders have been attacking this problem in recent years.  In the dark, distant days during which I participated in a fantasy football league (aka "heroin for obsessive statistical analysts"), reading the lively commentary in their preseason NFL guide was about the only constructive activity associated with my participation.  The last couple years, FO has expanded their college football operations, and I was recently sent a copy of the college section of this year's FO preaseason guide.

While the stats are still a bit clunky in terms of interpretation, FO has come up with a single measure of offensive and defensive efficiency: "F/+."  The stat is computed based on a combination of FO's two college football team efficiency stats: FEI (which is based on drive-level data) and S&P+ (which is based on play-level data).  The FO writers describe F/+ in the following (somewhat vague) terms:

. . . the F/+ measure combines FEI and S&P+.  There is a clear distinction between the two individual approaches, and merging the two diminishes certain outliers caused by the quirks of each method.  The resulting metric is both powerfully predictive and sensibly evaluative.

The "+" indicates that the measure is schedule-adjusted.  It's also worth nothing that garbage-time drives/plays are filtered out of the numbers.  After the jump, a scatterplot (!) of the 11 Big Ten football teams' performance last season using the F/+ measure. 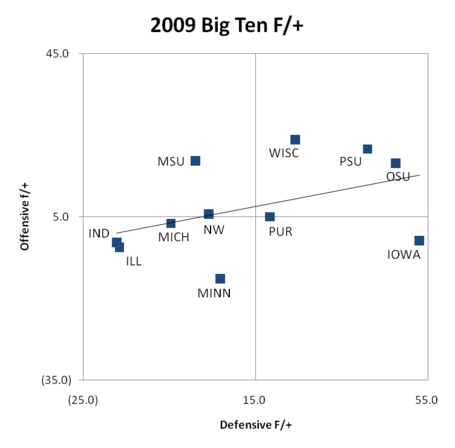 That looks fairly intuitive--a superior approach to plotting yards or points per game, both of which are subject to substantially misleading factors (passing yards gained when playing from behind, points scored by the defense/special teams, etc.).  Total offense (yards per game) had Ohio State with only the 8th best offense in the league last season.  Scoring offense (points per game) had Michigan with the 3rd best offense in the league.  Those ranking are more plausibly reversed (or close to it) in terms of true performance level, adjusted for game situations, etc.

Moving down the trendline (from right to left), the results track pretty closely with the 2009 conference standings (Northwestern wasn't quite as good as their 5-3 record indicated; Michigan wasn't quite as bad as their 1-7 mark) and the Sagarin ratings (F/+ liked Purdue more than Sagarin did).  We're overlooking special teams here, of course, but that's a smaller part of the game and, in the case of kick/punt returns at least, generally less predictable than offensive/defensive performance.

There's a pretty high correlation between offensive and defensive success.  Only Iowa and Minnesota played significantly better on defense than on offense.  MSU and Wisconsin were the two teams that relied more heavily on offensive success.  MSU was the third best team offensive team in the league, while ranking ahead of only the Illinois-Indiana-Michigan trio on defense.

Note without a theoretical explanation: Team performance appears to have varied more widely on the defensive side of the ball than on the offensive side.  Technical note: It appears that the F/+ stat is biased slightly toward defense, hence the differing axis scales.

The FO folks also have a projected version of F/+, which is based on (1) five years of F/+ data ("Program F/+"), (2) a measure of five-year recruiting success, and (3) offensive and defensive performance.  (Fun fact: MSU ranks 4th in the league in 5-year recruiting average--behind OSU, UM, and PSU; just ahead of Illinois.)  Adjustments are made for the number of returning starters a team has, players lost to the NFL, and passing down success (which tends to fluctuate quite a bit from year to year and have an inordinate impact on scoring success).  The result is something that appears to have pretty good predictive power (correlation of 0.85 between projected and actual results according to FO).  Among Big Ten teams, the system would have missed badly only on Illinois and Michigan last year.  The FO guide notes the following:

Relative to the pros, college football teams are much more consistent in year-to-year performance.  Breakout seasons and catastrophic collapses certainly occur, but generally speaking, teams can be expected to play within a reasonable range of their baseline program expectations.

It's no surprise, then, that the scatterplot of projected Big Ten performance looks a lot like the 2009 scatterplot: 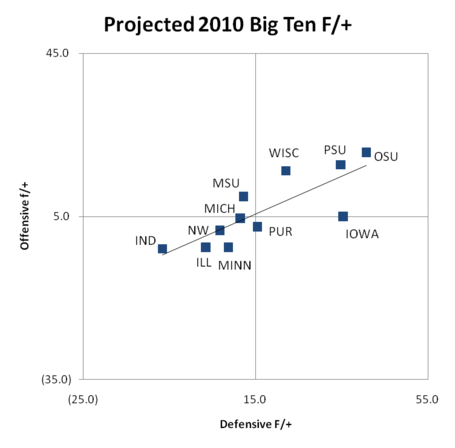 The 11 teams are more tightly bunched around the trendline, with offensive and defensive performance generally projected to revert toward the mean, but the rank ordering is basically the same.  The biggest shifts are MSU and Michigan moving up the ladder a couple spots, with the other teams in the middle of the league dropping a notch or two.  Michigan State projects as the 5th best team in the league, although there's a large gap between the top four teams and the rest of the league.  FO's win projection system give MSU an 88 percent chance of finishing in the range of 6 to 9 regular season wins, with a mean outcome of 7.6 wins.

The trick for MSU will be to maintain their offensive efficiency from last season (the rebuilt left side of the offensive line giving Kirk Cousins enough time to work his magic will be key) while meeting FO's expectations that their defense will revert to just a league-average level (not conceding 300 passing yards to any opposing QB with a pulse would be a start).  If those two things happen, a win total at the upper end of FO's projection range and a January bowl game are there for the taking.  If not, well, a less entertaining 6-win season is a real possibility.

Bigger picture, Ohio State is the obvious favorite to win the league--stable offensive lineup (9 returning starters) for Terrelle Pryor to work with, plenty of talent to replace the 5 lost starters on defense.  Despite losing 7 starters on defense and 5 on offense (including their starting QB), Penn State is the FO pick to finish 2nd.  Iowa's averagish offense (returning only 6 starters from what was already a below-average attack) prevents them from joining Ohio State and Penn State as an elite team; ditto for Wisconsin's defense (beware the Badgers on offense, though--10 starters returning from the most efficient attack in the league last year).

For more on FO's data-based take on the 2010 Big Ten season (and the outlooks for the other major conferences), you can pony up $5 for a PDF version of the college section of the preseason guide.  My goal is to do a little more with college football statistics this season (maybe disruption percentage will catch on this time around!), and the FO numbers will likely be a significant role in that endeavor.