The games between Michigan State and Notre Dame have in recent years been very close and very exciting. State won in 2007 and 2008 by margins of 16 and 17, respectively, but those large margins of victory have been the exception and not the rule. Notre Dame's last four wins in this series have been by a total margin of 17 points, and they haven't beaten MSU by more than a touchdown since 1993. There's little reason to believe that this game will be any different: MSU and ND look to be two evenly-matched teams that shouldn't be separated by more than a handful of points.

Note that it's looking increasingly likely that there will be rain at some point during the game, and that, along with the fact that it's a night game, will bring the inevitable comparisons to the 2006 nightmare. Regardless of whether it rains, I have faith that this is a fundamentally different team and program than the clownshoes version of the late JLS years, and that this won't happen again. Have faith that our team is talented, ready, and certainly hungry for a win after how last year's game finished. I do, and think we'll send the Irish home with another loss. 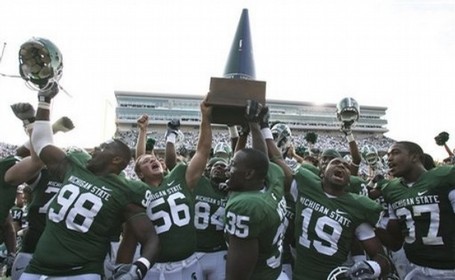 WHEN MICHIGAN STATE IS ON DEFENSE: . . . they'll be contending with a Notre Dame offense that isn't nearly as dangerous as last year's unit, but is certainly capable of scoring points on MSU.

As you probably know, the Irish are led by Dr. Dayne Crist, who was a very highly touted recruit from high school and was Jimmy Clausen's heir apparent for two years before finally taking the reins this season. Crist has been reasonably efficient this season: he's completed 62% of his passes, with three touchdowns and only one interception. His importance to Notre Dame was never more apparent than it was last weekend; when Crist went down for a few series in the first half, the Irish looked utterly lost on offense. The Irish had eight drives without Crist, and scored a grand total of zero points on those possessions. The eight drives with Crist yielded all 24 Notre Dame points. That's obviously not to say that ND would have blown Michigan out of the water had Crist been able to play the entire game, but he clearly makes a major difference for the Irish. Nonetheless, Saturday will mark Crist's first road start; it'll be extremely important for MSU to pressure Crist and try to force him into bad decisions.

Crist can throw to two of the country's most capable receivers: Michael Floyd and Kyle Rudolph. Rudolph, of course, had a go-ahead 95-yard touchdown catch late in the game against Michigan last week. The catch was a product of laughably bad safety play by Michigan, but Rudolph is an extremely dangerous tight end, and he did plenty of damage against MSU last season (6 catches, 95 yards, including a 52-yarder). We have struggled enormously against good tight ends in the last few seasons (Rudolph, Garrett Graham, Andrew Quarless, last week against FAU, etc.). I seriously hope that we have a plan to curtail Rudolph tomorrow, or it could get ugly.

Floyd is a excellent receiver, though his production has suffered this season. I'll let Keith Arnold explain why:

[Floyd has been] a marked man. With Golden Tate leaving early and Floyd playing opposite a true freshman that's split wide, teams have been rolling coverages over the top, and Michael hasn't had a chance to really explode for any of his traditional big plays. (He's also dropped a few balls, had Crist throw him into the band twice, and not run his trademark fade route yet, either.) The key to getting Floyd unleashed will be the continued dominance of Kyle Rudolph and Theo Riddick stepping up at the slot receiver. Floyd didn't go two games in a row without a touchdown last year. You've got to think a big game is coming.

The aforementioned freshman receiver is TJ Jones, who had a 53-yard touchdown catch last week. Without Golden Tate, this is a significantly less scary receiving corps than ND had last season, but they're still more than capable of besting MSU's embattled secondary.

Armando Allen, currently in his fourteenth season of eligibility in South Bend, will presuambly handle the most carries for the Irish on Saturday. He ran well against MSU last season (23 carries, 115 yards, 1 TD), and has been pretty good this season as well (averaging 5.5 yards per carry against two Big Ten defenses). In last year's game, Allen was successful taking direct snaps and running wildcat-type formations. Keith Arnold alerted us to keep an eye on Cierre Wood as well; indeed he was "stuck in neutral" against Michigan but he's also very, very fast and has big-play potential.

Key player for MSU: Colin Neely. Neely was fantastic last week against FAU, and he'll need another fine performance on Saturday. Our secondary will be under tons of pressure against ND's fine receivers; keeping pressure on Crist would do wonders for our pass defense. This is not wishful thinking; Ryan Kerrigan was a terrorbeast against ND, and while Neely isn't going to approach Kerrigan's level of disruption, some large portion thereof is realistic.

Key player for Notre Dame: Theo Riddick. If he can get going, MSU won't be able to focus on Michael Floyd. And then bad things will happen. So, let's hope this doesn't happen.

WHEN MICHIGAN STATE IS ON OFFENSE: . . . it's absolutely imperative that Kirk Cousins throws the ball more accurately, and makes better decisions. Cousins certainly hasn't been great so far this season, but I'm still confident in him. Mark Dell had a huge game against Notre Dame last season (6 catches, 121 yards, including a 57 yard catch) and looked very good last week; he should be a primary option. Regarding Notre Dame's pass defense, here's what mgoblog said last week:

As far as ND goes, Marve struggled against the veteran secondary, throwing a pick when Walls sank into the deep route in cover two and Marve chucked it anyway and completing a large number of uselessly short passes. Though he went 31 of 42, all those completions only gained 220 yards, a Threet/Sheridan-esque 5.2 YPC. The longest completion of the day went for 16 yards. Notre Dame also racked up four sacks, though as mentioned the coaching staff put the blame for three of them on Marve; the fourth was blamed on a tailback's blitz pickup. Notre Dame looks to have the same low-mistake secondary they've had for a long time.

ND lost Kyle McCarthy to graduation but nearly everyone else is back for them. They're good but not exceptional, and Cousins' interception at the end of the game last year unfortunately obscured the huge game he had: 23-35-302. Obviously, the scheme is different this year but Cousins has been successful against the ND personnel and there's no reason to believe that he can't be again.

Cousins would be helped enormously if MSU can get the running game going again. Baker and Bell have been unbelievable in the first two games, and they'll be joined by Larry Caper this week. Here's what Keith Arnold said about ND's rush defense:

It's tough to dismiss Robinson's performance, but the Irish have actually done a very good job of bottling up running backs. Granted, it's only two games, but opposing running backs are only averaging 3.3 yards-per-carry against the Irish, and Ian Williams, Manti Te'o, and Carlo Calabrese are rock-solid run defenders. (As rock solid as you can be if you gave up 258 yards in one afternoon to a 185-pound kid that wears velcro on his shoes...)

That's somewhat true, but 1) you can't entirely discount what Robinson did, even if MSU's scheme is completely different, and 2) they weren't lights-out against Purdue, either. Dan Dierking (who? Exactly.) rushed for 6.2 yards per carry for the Boilers managed 102 yards on the day with worse running backs and a worse offensive line than MSU has. It's probably unrealistic to expect MSU to constantly gash the ND defense in the style they've managed in the last two games, but establishing a running game will be critically important to establish the play action. And if we can do that, good things will happen, like so:

Erm, yeah, that's ND's safeties freezing on the run and then getting buuuurned. Speaking of mgoblog--if we can do things like this, cackle with knowing glee. ND's linebackers were similarly susceptible to play action last week--even the vaunted Manti Te'o had difficulties.

Key player for MSU: Kirk Cousins. This sounds like the easy way out, but it's true: if he doesn't play better, we don't win.

Key player(s) for ND: Ian Williams. ND's excellent nose guard had a strong game against MSU last season but struggled against Michigan last week. If he's having a good game, we probably won't get much done on the ground and the entire game plan is altered. This will be a big, big test for John Stipek.

I'm usually pretty manic-depressive about predicting MSU games, so the fact that I'm reasonably optimistic about this one disturbs me some. I love the way we've run the ball so far, I think that Kirk Cousins will be highly motivated to atone for his interception last season, and while I don't think our defense is going to dominate Notre Dame, I certainly don't think they'll be steamrolled, either. It's always risky to count on a quarterback playing well in his first road start, and I think we'll have some success blitzing Crist and rattling him. There are plenty of ways MSU could lose this game: Michael Floyd could go off, as could Kyle Rudolph (and the latter is more likely, in my opinion), we could turn the ball over a ton, we could have horrific defensive breakdowns, and so on.

But I think the first two games have been perfect for MSU: challenging enough to keep the team interested, but not challenging enough to force the coaches to open up the playbook or for the players to be tired/banged up heading into this game.Furthermore, playing this game in East Lansing will make a difference. From the beginning of spring practice, there's been a terrific vibe surrounding this MSU team; they're talented and ready, and I think they'll pass their first big test of the year. 30-24 MSU, or something like that.

I wrote that on Tuesday and still like it now. GO STATE.