So who exactly was John Pingel?

Share All sharing options for: So who exactly was John Pingel? 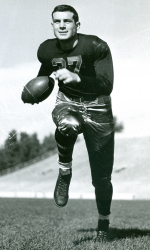 [File under "The Times When Being a Sports Blogger Makes You Want to Punch Something. Repeatedly.": The SBN post editor went and ate LVS's game preview this morning.  He'll recreate it later, but it won't be up until some time tonight.  Plan on perusing it as you enjoy your morning coffee before heading out to tailgate tomorrow.  In the mean time, here's an MVictors-esque historical piece for you.]

Tomorrow night, Michigan State will be adding two names to its "Ring of Fame" in Spartan Stadium.  Brad VanPelt and John Pingel will join Don Coleman, George Webster, former MSU President John Hannah, and Charles "Bubba" Smith in the ring, becoming the last MSU players to have their numbers retired (although there will be future additions to the Ring of Fame).

Most readers are probably at least somewhat familiar with the accomplishments of VanPelt, who was a multi-sport star at MSU in the 1970s.  (If you're not, be sure to read Joe Rexrode's excellent profile on him.)  But most fans probably know little to nothing about John Pingel.  (I didn't, until I went about composing this post.)  All the information I could dig up (without a trip to the MSU Library or Athletic Department archives) after the jump.

Rexrode tracked down one an MSU team manager who worked with the team during Pingel's tenure there: now-92-year-old Fred Colwell.  He had this to say about Pingel's versatility:

"Passing was his biggest strength," Colwell recalled of Pingel. "But he could pass, run and punt with the best of them. He did everything. He was just a great, great player."

That versatility is evident in the official capsule from MSU:

Born Nov. 6, 1916, in Mount Clemens, Mich., Pingel appeared in 28 consecutive games from 1936-38 for Coach Charlie Bachman and helped the Spartans to a combined record of 20-6-2 (.750), including the school's first-ever postseason bowl appearance. His likeness is preserved in one of the sandstone panels above the main entrance to Jenison Field House.

As a junior, Pingel accounted for 1,146 total yards and 12 TDs while leading the Spartans to an 8-1 regular-season record and a trip to the 1938 Orange Bowl against Auburn. The 6-foot, 178-pound halfback led the team in rushing in 1937, with 117 carries for 665 yards (5.7 avg.) and five TDs. Pingel completed 30-of-68 passes (.441) for 481 yards and seven scores, and he also led the nation in punting with his 42.6-yard average. He was named second-team All-American by The Associated Press and selected third-team All-American by the International News Service. In a 19-14 come-from-behind victory in Week 2 at Michigan, Pingel hooked up with Ole Nelson for scoring plays of 30 and 42 yards. His 42-yard strike to Nelson with less than 10 minutes to play in the fourth quarter proved to be the game-winning score. In Week 3, he averaged 52 yards per punt in a 3-0 loss at Manhattan. Pingel scored three rushing TDs in a 21-7 win over Marquette in Week 5, including an 8-yard gallop. He threw TD passes of 12 yards to Eddie Pearce and 29 yards to Nelson in a 13-6 Homecoming victory over Carnegie Tech in Week 8. In the regular-season finale at San Francisco, Pingel scored on TD runs of 75 and 36 yards and averaged 50.8 yards per punt as Michigan State recorded its sixth-straight win, 14-0.

As a senior in 1938, he played 451 out of a possible 540 minutes while accounting for 1,127 yards and 12 TDs. Pingel rushed 110 times for 556 yards (5.1 avg.) and five scores and connected on 54-of-101 throws (.535) for 571 yards and seven TDs. He also averaged 41.8 yards on 99 punts, and his 4,138 punting yards still rank as the NCAA single-season record. Pingel earned first-team All-America honors from the AP, INS, Central Press, Newspapers Enterprise Association and Liberty Magazine. In Week 5, Pingel carried 19 times for 115 yards, including TD runs of 23 and 28 yards, and threw a 3-yard TD pass to Nelson as Michigan State knocked off previously unbeaten Syracuse, 19-12. In Week 8, he had three TD passes in a 20-14 victory at Marquette, including a 10-yard scoring toss to Jack Amon with less than two minutes remaining.

Pause the video below at the 35-second mark to see the image of Pingel on the outside of Jenison Field House.  It's the one in the middle.  There's a basketball player to the left and a baseball player to the right.

The NCAA punting record is, of course, largely a function of how many times that particular MSU team punted the ball.  Pingel's 99 punt attempts in 1938 are 22 more than any other Spartan punter has ever attempted.  (The reason for all those punts isn't clear from the season summary.  The team only averaged 14.8 points/game and allowed just 6.6 points/game, but those numbers aren't unusually low for that era.)  Still, Pingel does rank 6th all-time in punting average at MSU.

Pingel was the first AP All-American in the history of the program.  And he led MSU to its first-ever postseason bowl appearance--the 1938 Orange Bowl.  That game would be MSU's only bowl appearance prior to the glory years of the 1950s and 60s.  Unfortunately, Pingel was held to just 12 yards on 7 rushes (also completing a 23-yard pass) and MSU lost to Auburn 6-0.

Pingel is in the company of most of the current MSU football roster in that he participated in two wins over in-state rival Michigan: a 21-7 win in 1936 and a 19-14 triumph in 1937.  Those two wins capped a four-year winning streak over the Wolverines.

Despite being drafted #7 overall, Pingel's career in the NFL was a short one--presumably a function of the low pay in the league at the time.  According to Wikipedia, Pingel went on to a career in advertising.

And now, in the words of Paul Harvey, you know the rest of the story--or at least more of it.  The increased focus the Athletic Department has put on the university's athletic history in recent years has been a great move, both for the athletes and the fans.  In this case, it's fun to be able to learn something about an MSU star who preceded the greats of the national championship years that would come a couple decades later.