A Few Words Regarding the Supposed MSU Delay of Game

Share All sharing options for: A Few Words Regarding the Supposed MSU Delay of Game

Throughout the past 16 hours or so, you've surely seen this graphic on Inside the Irish and elsewhere: 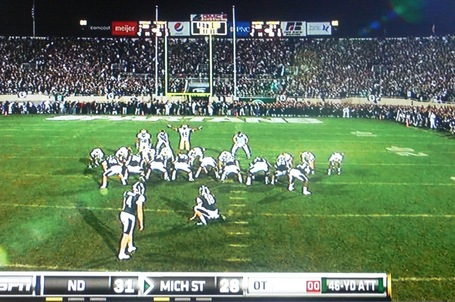 The implication being, of course, that the glorious final play should never have happened because MSU was guilty of delay of game.  This argument, while correct in the most technical sense, is nonetheless completely specious as applied to the real world.  The definitive retort is supplied by this fantastic video, assembled by EDSBS commenter Bubbaprog:

And, the video's conclusion squares exactly with the explanation issued by the Big East (and do note, these were Big East--not Big Ten--referees) supporting the referees' decision:

After review, the conference believes that the game officials correctly applied the proper mechanics and guidelines that are in place to determine, in a consistent manner, when a flag should be thrown for delay of game. The responsibility is assigned to the back judge, who in this situation was standing beneath the upright. Proper mechanics dictate that his focus be directed to the play clock as it approaches zero. When the play clock display reads zero, he must re-direct his attention to the ball. At that time, if the snap has not started, a flag will be thrown for delay of game. If the snap has begun, no flag will be thrown.

Under these procedures, there will always be a small amount of lag time between the time the clock reads zero and the time the back judge is able to see the football. On the play in question, this lag time created the situation where it appears the play clock expired just before the snap. We believe the snap occurred well within the normal lag time for the back judge to make this determination. This play is not reviewable under current NCAA rules.

I co-sign that statement entirely.  To put the issue simply: