[Note: I didn't actually watch the BTN special.  I'm working off the Tweetfest that occurred during/after the announcement.  Divisions/fixed crossover details are here, on the very small chance you haven't seem them yet.]

So, big picture, the process of arriving at Big Ten divisions can be summed up as follows:

So, like, smashing success, boys.  So much more interesting (and revenue maximizing!) than a simple geographic split.

Moving right along: Within the context of the jury-rigged framework Jim Delany et al. have created, MSU comes out looking pretty good.  Our primary rival is in our division, Nebraska and Iowa are somewhat less frightening than Ohio State and Penn State as divisional foes, and fixed cross-divisional rivals don't come much friendlier than Indiana (as artificially-generated as that rivalry may be, Brass Spittoon or not).  (Bonus: Mark Hollis gets his regular trips to Chicago to play Northwestern.)  If/when MSU puts itself in a position to make a run at a Big Ten title, odds are we won't be able to complain about schedule imbalances as a major obstacle.

Of course, the two non-fixed cross-divisional opponents we drew for the first two years of 12-team play both came up "CONTENDER": Ohio State and Wisconsin.  There was a decent chance we'd draw two teams from the OSU/PSU/Wisconsin group, 30%, but that does take the short-term sheen off the IU thing.  (By the way, there was some sort of a random draw, right?  Right?  Who am I kidding?  Probably not.)

Other observations (many of them lifted from LVS and Pete): 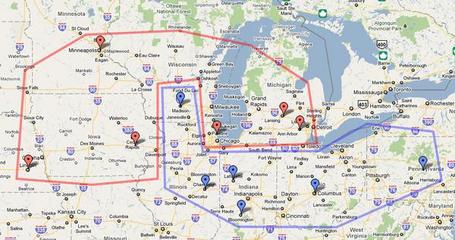