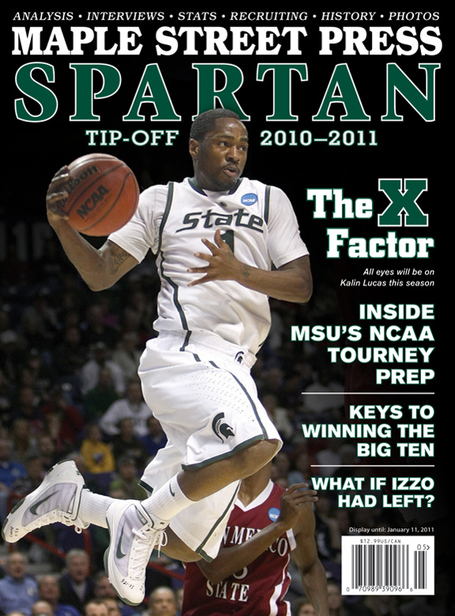 As alluded to in my last post, the preseason basketball guide to which the three of us TOCers contributed is now finalized.  And, as of today, you can pre-order a copy of Spartan Tip-Off 2010-2011 from Maple Street Press.  Copies will ship on October 4, and it'll hit the newsstands on October 19 (we'll post more details on hard copy distribution as we get them).

The guide was edited by occasional TOC contributor Steve Hendershot.  Because he's only an occasional contributor, I can heap even more praise on him than I would on one of us full-timers: Steve did a truly superlative job of procuring content from across the Spartan basketball universe--from us blogger types to newspaper beat writers to former Spartan players.

Unlike the national preseason magazines, which give you maybe 2 or 3 pages on the MSU team, written by a national basketball writer, Spartan Tip-Off 2010-2011 provides an avalanche of Spartan-centric content.  Witness:

And those are just the feature pieces.  Other topics include the year-two improvement for MSU big men under Izzo, the Breslin Center's significance to MSU's upsurge over the last 25 years, and even more inside scoop from Tim Bograkos.

Add it all up and you'll get 128 pages of glossy, ad-free MSU hoops content--all for less than the cost of a Spartan Stadium parking pass.