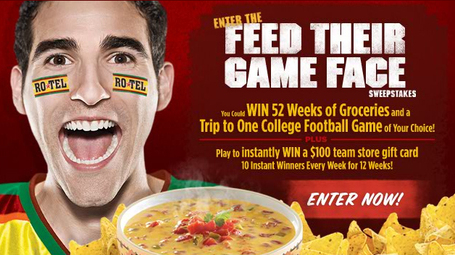 RO*TEL not only kept the Big Ten Network in the black for the first two years of its existence, but also makes mighty, mighty tasty canned tomatoes and chilies--which, when combined with Velveeta make delicious queso, and are also an integral part of the greatest salsa recipe in the universe.  Right now, RO*TEL is running the "Feed Their Game Face" sweepstakes, wherein you can win a year's worth of groceries and a trip to a college football game of your choice, among other fantastic prizes.  Register for the sweepstakes at http://www.feedtheirgameface.com/.

To promote the sweepstakes, RO*TEL asked us to write two posts about players who have performed exceptionally well for Michigan State this season.  Follow us after the jump for more.

Today's featured player is [DRUMROLL!] Aaron Bates!  Normally, you wouldn't expect a punter to rank so highly on a list like this, but as we found out on Saturday, Bates is no ordinary punter:

Will I ever get tired of posting this video?  Uh, no.

As Todd Blackledge said, Bates was a quarterback in high school, but the poise, patience, and accuracy he showed in the now-famous "Little Giants" play had to have been above and beyond what Mark Dantonio and the coaching staff ever hoped he could have been capable of.  As we've found out in the intervening days, the primary receiver on the play was Le'Veon Bell, who became tangled up (read: held and dragged to the ground) with two Notre Dame players.  Bates stayed utterly calm and collected, moved around in the pocket while waiting for his secondary receiver to come open, and then threw the perfect pass to Charlie Gantt to complete a play that will live long in the Spartan memory.  It was as epic as cameo performances ever get, and for his troubles, Bates garnered 1) more glory than most punters ever dream of receiving, and 2) an absolutely otherworldly 673.60 passer rating.  Bravo, sir, bravo.

And let's not forget that Bates is pretty good at his day job, too: he's currently third in the conference in punting average, and against Notre Dame, his 8 punts (45.4 yard average) helped MSU stay in the game when the offense was struggling in the first and fourth quarters.  Without his punting during the game, he would have never had the opportunity to become a hero in overtime.  Congratulations, Aaron.  The queso's on us.

Again, please register for the sweepstakes at www.feedtheirgameface.com.  Thanks to RO*TEL for supporting our work at The Only Colors..