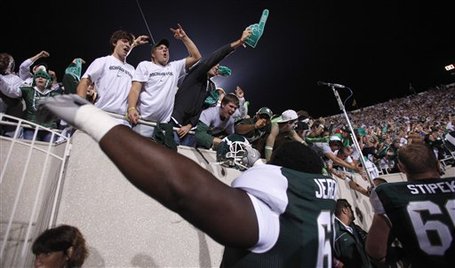 Recruiting: Because the games are won on the field but the future is secured in the stands (AP Photo/Al Goldis)

We're a little delayed in getting this out but I've been waiting to see what information leaked out about the big recruiting weekend that was the Notre Dame game.  Not only were some of Mark Dantonio's biggest targets in attendance, but Tom Izzo hosted all of the committed 2011 and 2012 players as well as a few of his primary 2013 prospects.  As discussed earlier, Chicago forward Jabari Parker was in attendance.  According to ESPN's Reggie Rankin, he had a great time and "loved the basketball tradition of the Spartans."   Later in the week, Parker received an offer from Purdue and Illinois Prep Bulls-eye notes that this is his sixth Big Ten offer.  In years past, schools like Purdue might have had more of an inside track on area players like Parker; however, the Branden Dawson recruitment proved that MSU could still go into NW Indiana and the Chicagoland and compete with anyone.  Con-T has located a plethora of video on Parker to scout here, here, and here.

Gary Harris was in attendance as well where, according to his twitter, he enjoyed meeting Zack Randolph who turns out to be a neighbor.  Small world.  His football schedule may prevent him from attending MSU's Midnight Madness so this was an important opportunity to get Harris on campus and make another pitch.  Harris hasn't announced any kind of a timetable for his decision but MSU fans have reason to feel good about their school's shot with this elite player from Indiana.  One of MSU's top competitors for his services, Indiana University, is hoping to woo Harris as well during their big recruiting weekend of Oct. 2nd.

There's more info around the MSU recruiting world after the jump.  As always, feel free to add your links, comments, and discussion to this thread as it sits on the right.  If you like this feature, "Rec's" are greatly appreciated!

Another visitor for the Notre Dame game was 2014(!) guard Drake Harris from Grand Rapids Christian.  It takes quite the prospect to get people talking this early but there is speculation that Harris could shape up into a top-tier national player for his recruiting class.  Individuals aren't ranked in detail but he already has his name on ESPN's list of 100 players for 2014.  He also appears on the watchlist for Prep Hoops Assist. (HT: Con-T, again)

Kyle Neddenriep of the IndyStar has word that Tom Izzo will be in to visit Collin Hartman, a 6'6" forward from Indianapolis, during an open gym today.   He's already received lots of Big Ten attention with interest from Indiana, Notre Dame, Purdue, and Ohio State.  Hartman is ranked as a four-star on Rivals and is considered by many to be the top player in the state of Indiana for 2013.  You can read a recent(ish) interview with him here at Inside the Hall.  His mother was a player for the Butler Bulldogs so they're expected to be involved with a local legacy.

In another link thrown my way by my partner Con-T, R.J. Hunter tweeted that MSU was in to check him out at an open gym along with Wake Forest.   Like Harris, no one who is talking is sure where a spot for R.J. would come from, especially if part of the plan is to bring him in with friend and AAU partner Gary Harris.  For my money, I think this article hits the nail on the head: players almost always choose play for their fathers (Hunter's dad is the head man at IUPUI) even when larger offers sit on the table.  Ray McCallum and Trey Zeigler both pushed their announcements until the late period and If R.J. Hunter does the same, Izzo won't have to worry about the details of that open spot until April 2012.  I'd backburner this one for now.

If you'd like to see highlights from the Summer that made Denzel Valentine a star and a Spartan, take a look at this video mix.   These clips accent Denzel as a wing who can drive and dish off to the open man as well as his surprisingly effective outside shot.  There's also a nice screenshot of a certain little SB*NATION blog in the opening montage for bonus points.

In another loose end, Paul Honigford ended his recruitment by pledging to D2 Ashland.  Given that he was once talked about as a legit MSU target, it's a bit of surprise to see him go D2.  This is more evidence that projecting high school basketball players from a young age can be very uncertain territory.

In Michigan recruiting news not directly within the MSU sphere, Coach Tom Crean and some of his assistants visited Sherron Dorsey-Walker this week.  Dorsey-Walker surprised some outsiders by appearing at #74 in the Rivals 150.  With Michigan State taking Denzel Valentine and pursuing Gary Harris, it will be interesting to watch Dorsey-Walker's progress and see if he can join the recent pantheon of talented in-state wings (Alex Legion, Dar Tucker,  and dare I say - Manny Harris) who didn't fit at MSU.

Here's a general basketball recruiting article from Gary Parrish of CBS.  It discusses the pros and cons of coaches continuing to pursue individual players and the important skill of being able to tell when a coach is wasting his time recruiting a player who is not going to sign with his university.  Izzo has been quoted as saying that he's the type of coach who narrows in on a tight group of players instead of casting a wide net.  Though he's suggested that it can come back to bite you (see: Roberson, Anthony), it's hard to argue with Izzo's techniques.  After all, in recent years you can only say he's missed on a handful of prospects - Jamil Wilson, Dexter Strickland, Trey Ziegler, and perhaps a few others that slip my mind.

I'm working on a some early thoughts about the 2013 recruiting class for a future article. It may feel far off but in the recruiting world it's right around the corner.  Suffice it to say for now, I think this class will be a very different game than 2011/2012.  Those classes allowed for great flexibility and options for Izzo based on who was leaving and the number of scholarships available.  2013 may see a very small number of open spots and more positional need-based recruiting.  Michigan alone will probably have more high D1 guards then MSU can welcome without even mentioning regional players.  We've already started tentatively but fans can heat up on talking names once the high school season starts for the sophomores.

We hope to have some more updates ahead as Midnight Madness draws near and visiting attendees are lined up.