As I wrote in this space last year: "Good riddance, offseason.  It's time to play."  WMU makes the short drive up from Kalamazoo on Saturday to open the 2010 football season.  The Broncos are a nearly ideal early-season opponent for MSU: they're an in-state team, they're good enough that a sleepwalking effort won't cut it, but probably not good enough (at least at this point in the season) to put a serious scare into the Spartans.

MSU should be quite familiar with WMU, as the Broncos came to Spartan Stadium last November.  MSU won 49-14, in a game notable for 1) being the high point of Ashton Leggett's short MSU career, 2) Kirk Cousins' nearly-flawless performance (22-25, 353 yards, 2 TDs), and 3) MSU's last good defensive effort on the season.  Last season, WMU was supposed to be quite good: they were led by 4-year starter Tim Hiller, they had gone 9-4 the previous season, and many expected them to push CMU for the MAC title.  That didn't end up happening, as WMU struggled to a 5-7 finish, punctuated with Big Ten losses to Michigan, Indiana, and Michigan State.  This season, WMU returns 13 starters (although the departed include Hiller, 1000 yard rusher Brandon West, and their top two tacklers (LB Austin Pritchard and DE Justin Braska).  Nonetheless, Phil Steele lists WMU as his favorite to win the MAC West, and has them on his most improved list. 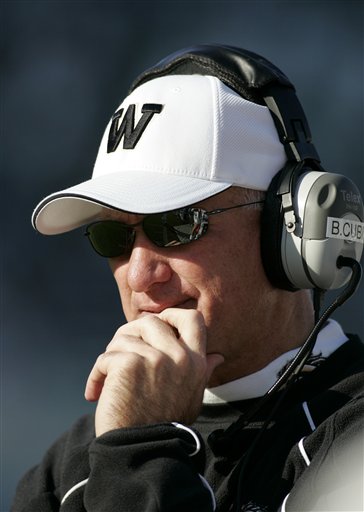 WHEN MICHIGAN STATE IS ON DEFENSE . . . they'll be lining up against a Bronco offense with seven returning starters, but a quarterback making his first start.  Alex Carder will be under center for WMU; he appeared in nine games last season as Tim Hiller's backup, but those appearances mostly came in mop-up duty and he only attempted seven passes on the season.  Carder isn't particularly mobile but is advertised to have a strong throwing arm.

Carder will have two major advantages, however: WMU's top 5 receivers from last season return, as do 4 of the 5 offensive line starters.  First, the receivers: the Broncos are led by Robert Arnheim, who had 59 catches and 3 TDs last season.  (5 of those catches came against MSU.)  Arnheim is 6'2", 195, and is a strong possession receiver.  Jordan White, conversely, is one of the fastest Broncos, and had 54 catches and 4 touchdowns last season.  Ansel Ponder (39 receptions, 3 TDs) and Juan Nunez (32 catches, 6 TDs(!)) will also contribute; Nunez is WMU's home run threat, as he averaged 13.6 yards/catch last season, and had a 73 yard TD catch in Ann Arbor last season.  WMU's other top returning receiver, Chleb (how do you pronounce this?!?) Ravenell is sidelined with a groin injury and will not play.  Even so, this is a talented and vastly experienced group that will certainly test MSU's allegedly-upgraded secondary.

As for the offensive line, most of last season's starters return, but this is a group that has struggled.  WMU allowed 24 sacks and averaged only 112 rushing yards per game (3.9 yards/rush) last season.  Since cohesion is such a large part of offensive line play, this is a group that could improve markedly this season, but MSU sacked Tim Hiller 3 times last season and only allowed the Broncos to rush for 94 yards.  MSU should have the upper hand in this matchup once again.  Note that Dann O'Neill will start at right tackle; he was a celebrated recruit and transferred to WMU from Michigan.  This will be his first college game.  Running behind the OL will be Aaron Winchester the starting RB for WMU.  He's small (5'6", 181 lbs.) but an allegedly "powerful" runner.  None of the Bronco running backs have much exeperience.

MSU fans should focus on how our secondary performs against WMU's talented, experienced receiving corps.  Even though WMU features a quarterback making his first collegiate start, a shutdown performance by the MSU DBs could indicate that the group really has improved. 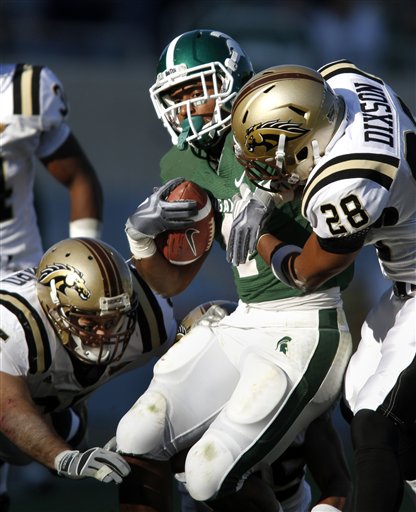 WHEN MICHIGAN STATE IS ON OFFENSE . . . they'll be going against a Bronco defense that returns 6 starters from a group which struggled last season.  Expecting MSU to equal last season's 602-yard output against the Broncos may be asking a bit much, but we should have no problem putting up points against Western.

WMU's two best defensive linemen from last season have departed.  This is a unit which struggled last season: opponents rushed for 178 yards per game, and 4.7 yards per carry.  Also, they're starting a true freshman (Travonte Boles) at defensive tackle who is--no joke--5'11" and 308 pounds. Seriously.  And that might even be charitable, as Phil Steele lists him at 5'11", 322.  Anyway, Edwin Baker had a strong game against the Broncos last season (15 rushes, 80 yards), and of course the departed Ashton Leggett rushed for 110 yards and 4 touchdowns.  Look for Baker to have another strong game.  Larry Caper will apparently play in spite of his nagging hand injury, and we're of course all looking forward to see whether Le'Veon Bell can translate his excellent camp performances into success on the field.

Kirk Cousins torched the Bronco secondary last season and there's no reason to expect that he won't do the same this year.  But Cousins wasn't the only one: the Broncos allowed 241 yards passing per game, allowed opposing QBs to complete 59% of their passes, and finished 77th in the country in pass efficiency defense.  This year, the Broncos will start two underclassmen in the secondary, and, if anything, should probably regress slightly.  Unless they step up significantly, MSU's talented receivers should have a field day, and this game could get ugly in a hurry.

The final thing to watch for is, of course, the kicking competition.  Joe Rexrode wrote that both Dan Conroy and Kevin Muma have struggled in scrimmage "pressure situations."  Dantonio has hedged his bets by listing the starting K as "Conroy OR Muma"; in his Wednesday chat, Rexrode gave a slight advantage to Muma.  We'll see.

FINAL THOUGHTS.  In short, the Broncos are experienced in many areas but quite inexperienced in several crucial areas.  As I said when briefly evaluating these games, this is a team that could be scary later in the season, but they need time to jell, and it's probably unreasonable to expect them to produce high-flying results in their first game, and against good competition.  If Cousins locks in, this could turn into a blowout; either way, it's difficult constructing a scenario where MSU loses.  MSU has performed well in home openers under Dantonio (55-18 win over UAB in 2007; 44-3 win over Montana St. in 2009), and I suspect that the trend will continue here.  MSU 48, WMU 20.